Part II of III: Celebrating Retirement In A Most Fitting Fashion

A few years ago my father made the decision to retire from his profession.  He had worked tirelessly since his teens and wanted to scale back his work commitments.  He envisioned a more leisurely life of gardening and travel, punctuated by a healthy dose of grandfatherly antics with his adoring grandchildren, all of which sounds terribly exhausting, especially for a septuagenarian.

It was difficult for me to actually imagine him truly retiring from his craft, no longer to be surrounded by bolts of fine cloth, the ever present dusty mess of his tailoring chalk, and a seemingly endless trail of errant threads and misplaced needles.  But, retirement was firmly on his mind so he hung up his shears, dismantled his workshop, and entered into the next phase of his life.

Actually, it was not quite that simple.  Some very special projects came knocking at his door which culminated in a spectacular apotheosis to his lengthy career.

It all began early in 2011.  My father was approached with the idea of working on an item of clothing that would be photographed as part of a series of Royal Mail postage stamps commemorating the best of British Fashion.

He was charged with replicating a jacket he had originally tailored in the early 1970's for Ringo Starr of The Beatles.  The original was designed by Tommy Nutter and cut by his colleague Edward Sexton, a master at his craft.  As my father had tailored the 1970's version, he was the only tailor considered for the remake, and rightly so. 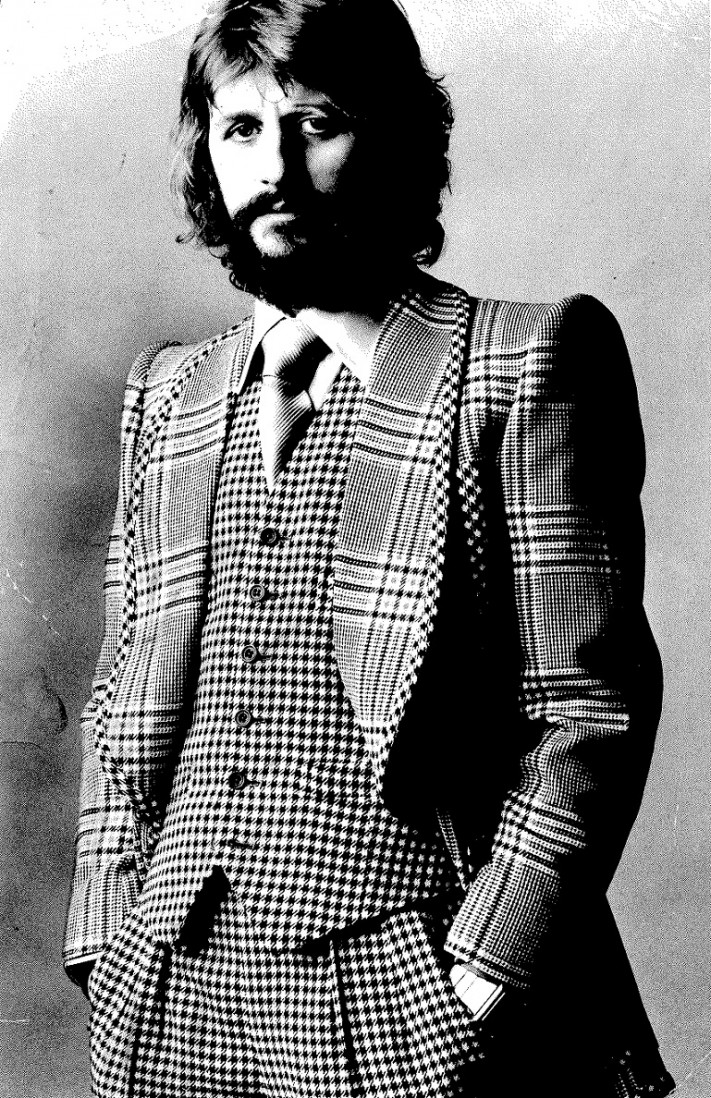 The nattily dressed Ringo Starr wearing the jacket my father tailored in the early 1970's, designed by the flamboyant Tommy Nutter


Make no mistake, this was no ordinary commission. The design incorporates a unique one-piece rolled collar that is highlighted with contrasting trim.  The sleeves, slightly upturned where they connect to the shoulder line, give the jacket an unusual silhouette. Only the most experienced of tailors would be able to successfully replicate the look of the original. The garment was more akin to a sculptural work of art than a piece of clothing.

Procuring the identical striking black and white Prince of Wales tweed to that of the original was next on the agenda.  Fortunately, the British mill that weaved the fabric in the 1970's is still in existence, but production of the pattern had long ago ceased. Apparently, very good records were kept because a little sleuthing through the mill's archives unearthed an adequate sample allowing the weavers to replicate the cloth especially for the stamp project.

I was intrigued to see the final result of this unusual collaboration with the Royal Mail. Fittingly, the stamp would be issued in the spring of 2012, just as my father was about to retire. Would you believe it if I told you he only shared the news of the stamp commission with me in passing, as though he was relaying a trivial tidbit of neighborhood gossip over the garden fence?  It was the eve of my departure from London, having visited with my parents during the prior three weeks of my winter holiday. Over cups of tea seated around the old pine kitchen table, he told me the story.  I'm so happy he did as it gave me the opportunity to put in my order for a first day special issue set of stamps that would be canceled at a post office located in W1, the same central London postcode shared by Savile Row, using a special ink stamp to commemorate the occasion.  The word proud falls vastly short of how I felt the day I received my stamps. 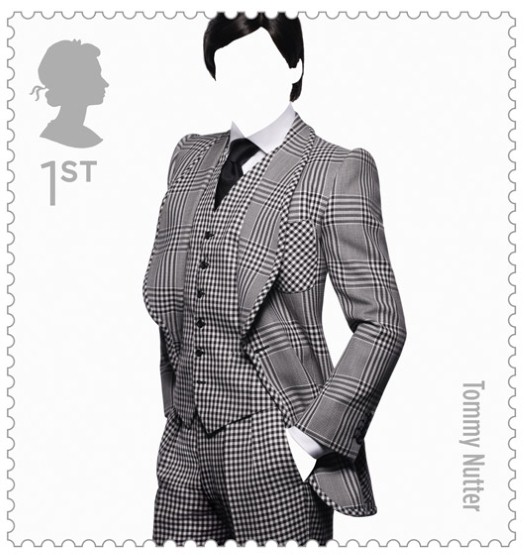 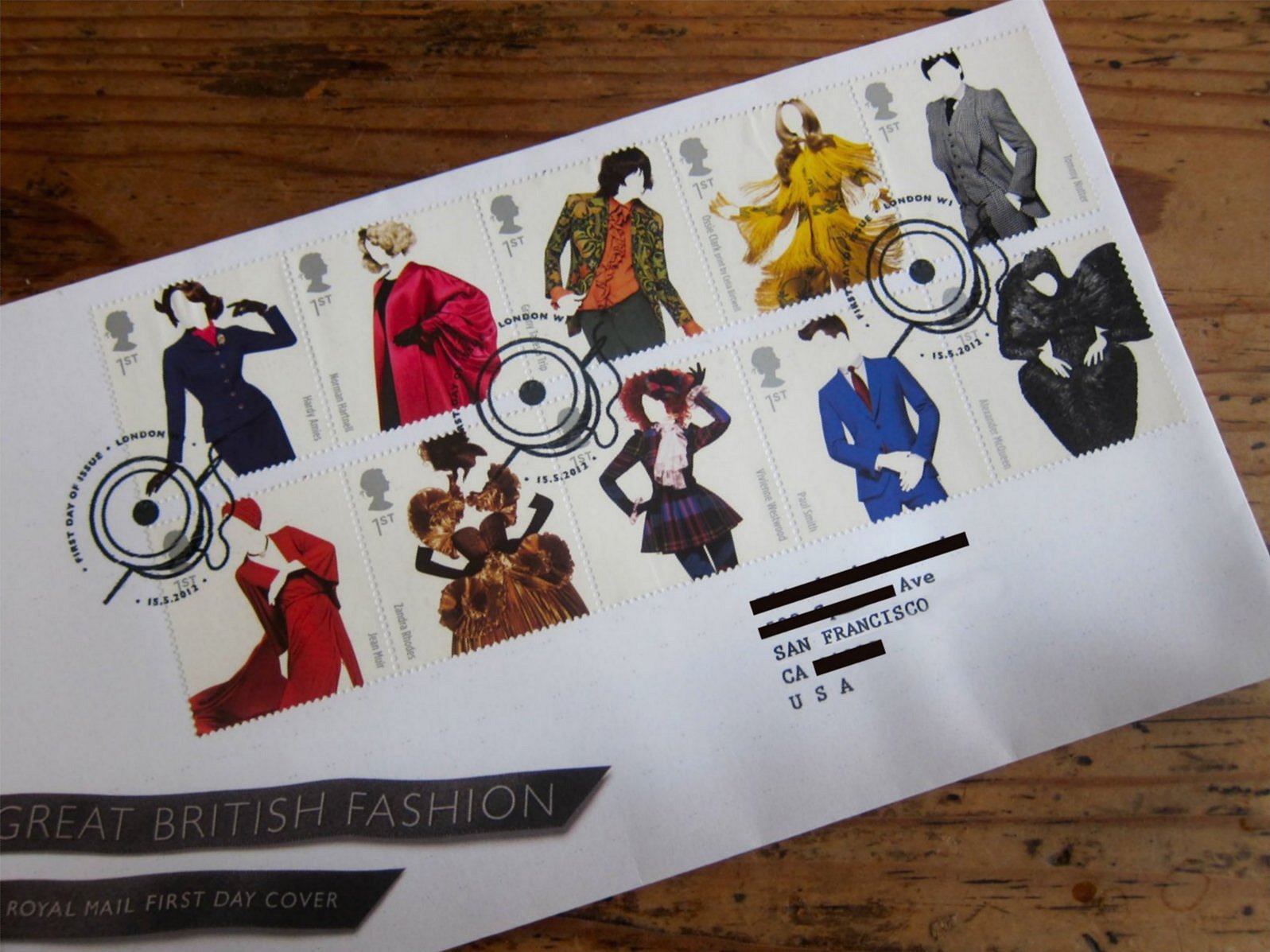 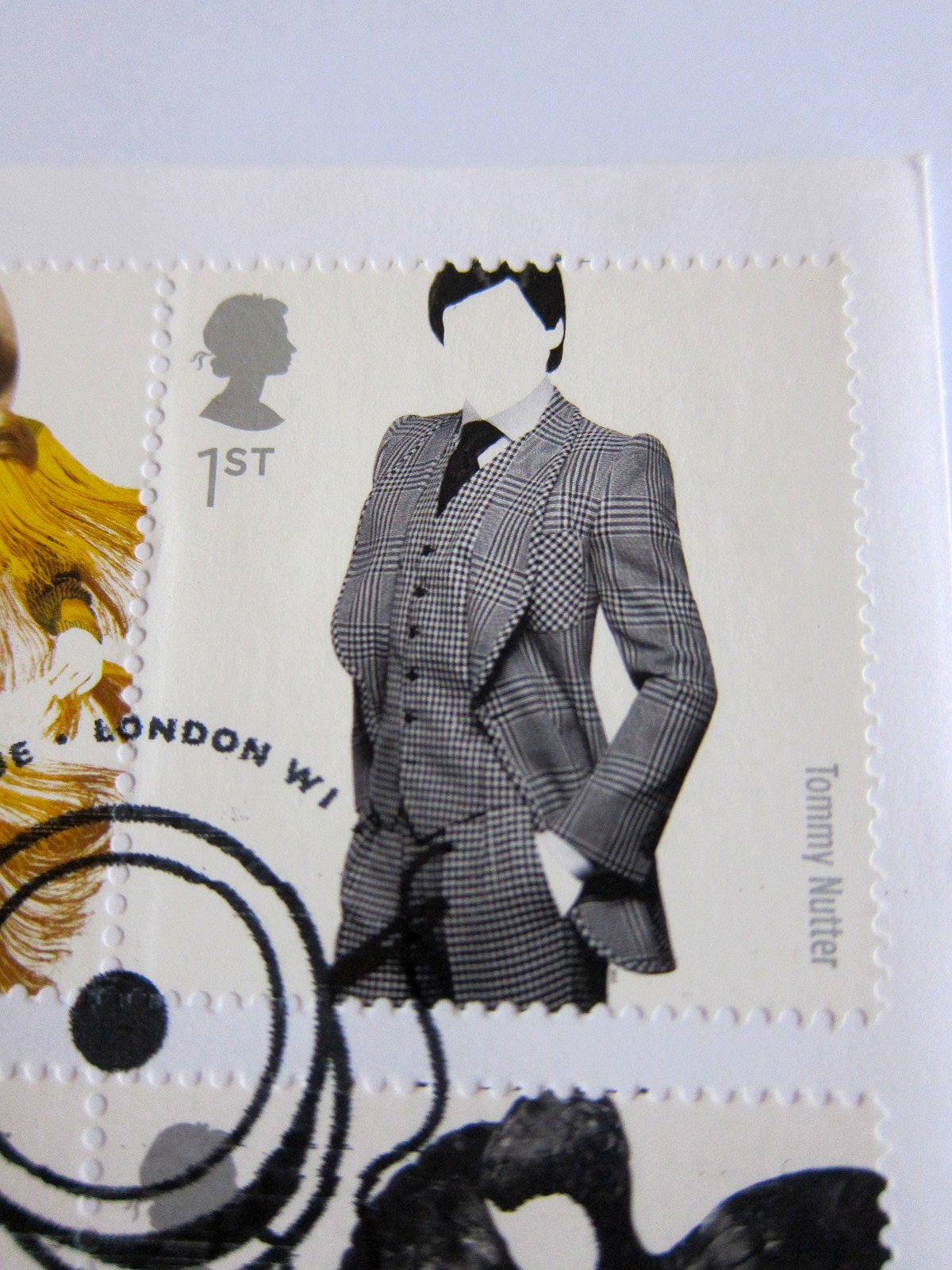 During the same conversation at the kitchen table that evening, my father relayed another bit of exciting news.  He casually mentioned the fact that he had been asked to give a talk on the opening day of a spacial exhibit that had been shown several months earlier at London's Fashion and Textile Museum.  Sadly, he had politely declined the invitation. "What?" I spurted, almost spilling my tea everywhere.  To make matters worse, I wondered why it was that I was only now learning of this news after the exhibition had closed. My father, as it turned out, did not think it "a big deal". 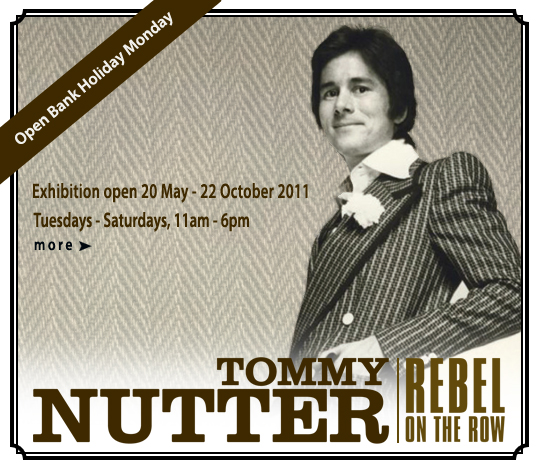 An advertisement for the Tommy Nutter: Rebel On The Row exhibition
Source

Actually, it was. Titled Rebel On The Row, the exhibition showcased many of the suits my father had tailored during the heyday of his career working at Nutters. It told the story of how Tommy Nutter revolutionized British tailoring.  I could barely believe my father's nonchalance towards this very exciting event. Suits he had tailored such as Mick and Bianca Jagger's wedding outfits, Elton John's colorful moire tailcoats, along with many other distinctive examples, were among the stars of this exhibit, and my father had made them all. 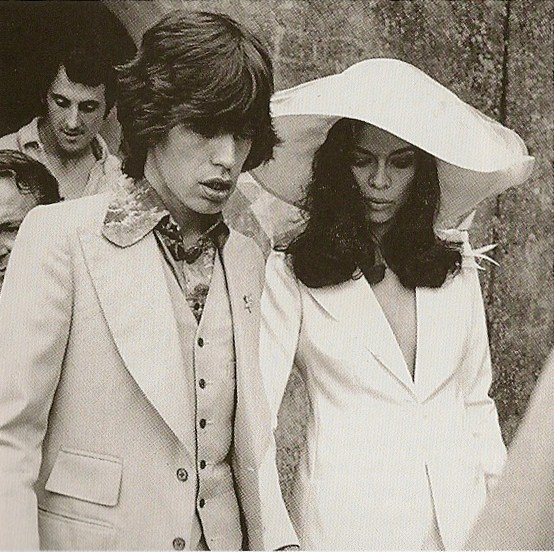 Mick and Bianca Jagger on their wedding day wearing the jackets my father tailored while working at Nutters (note: Bianca began the trend for cleavage-bearing attire decades before the likes of Jennifer Lopez and every other female celebrity caught on)
Source 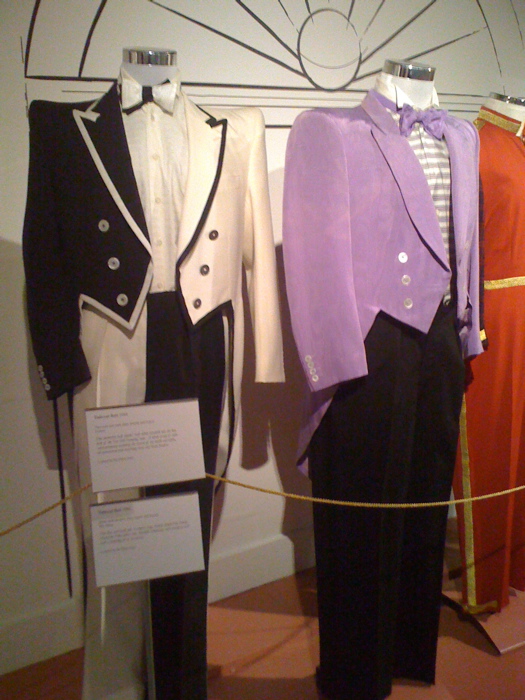 
I suppose his relaxed attitude should not have come as such a great surprise.  My father has always shied away from the spotlight and self-promotion, preferring instead to take pleasure in his work from behind the scenes.  I truly wish I could have seen this event firsthand to revisit some of my father's most memorable work.

The final jacket of my father's long career was to be worn at a very distinguished milestone celebration. Queen Elizabeth II would be celebrating her diamond jubilee throughout 2012.  To mark the auspicious occasion, a festive pop concert was to be staged directly in front of Buckingham Palace. Many of Britain's biggest musical talents would take the stage to entertain Her Royal Highness and other members of the royal family.  My father had been asked to make a particularly special jacket for one of the entertainers to be worn during the evening's grand performance.

The design, resembling a vintage British Bobby's jacket, would have a little decorated stand up collar and cuffs, and be set off with shiny silver metal buttons shaped into coronets. When my father took delivery of the cloth to be used for the jacket, which had been dropped off at his workshop by runner in a nondescript heavy-duty paper bag, he noticed it contained more than the expected bundle of pre-cut cloth.  He was a little bemused to discover a bedraggled vintage Union Jack flag which, upon closer examination, revealed it had formed part of a moth's banquet.  It was riddled with tiny holes. The flag turned out to be a 1953 model, manufactured the same year of Queen Elizabeth II's coronation.  I'll return to the flag a little later in the story.

On June 4, 2012, the day of the diamond jubilee concert celebration, we all eagerly awaited the appearance of Paul McCartney, not for his noted singing abilities mind you, but for the sheer pleasure of ogling at the jacket my father had made for him. 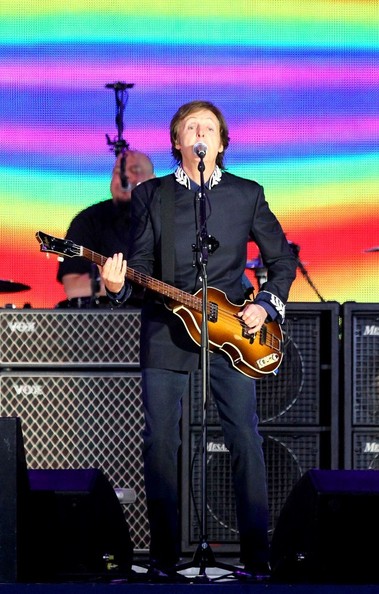 
Riveted to the television screen, we were more than a little delighted when, at the conclusion of his performance, Sir Paul whipped off his jacket and flashed his 1953 Union Jack to the world. Bravo Sir Paul, bravo! What a patriotic showman you are! 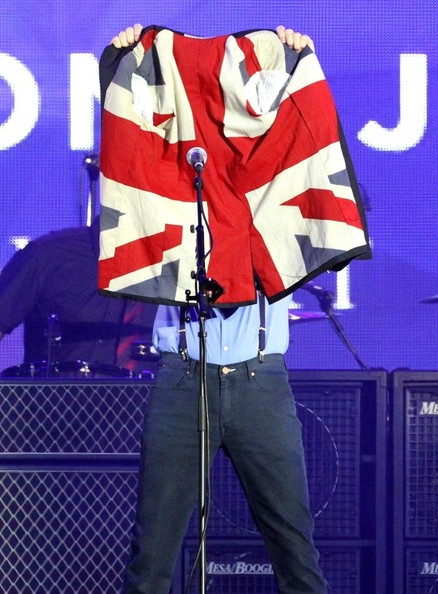 
And with that, dear reader, my father's career had come to a glorious end, in front of millions of viewers across the world, upon a stage in front of Buckingham Palace and The Queen of England, in the most fitting British way.  I could not imagine a more memorable retirement celebration than this grand spectacle, can you? 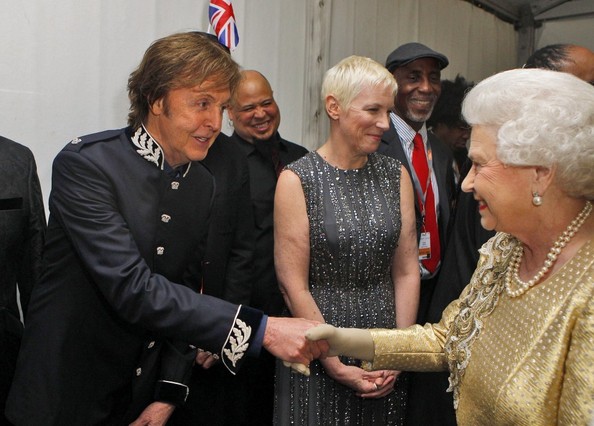 In the final installment to this series, I will show you what my father tailored for my lucky husband and I as his retirement gift to us.