Home At Last: The Reopening of Chuck Williams' First Shop 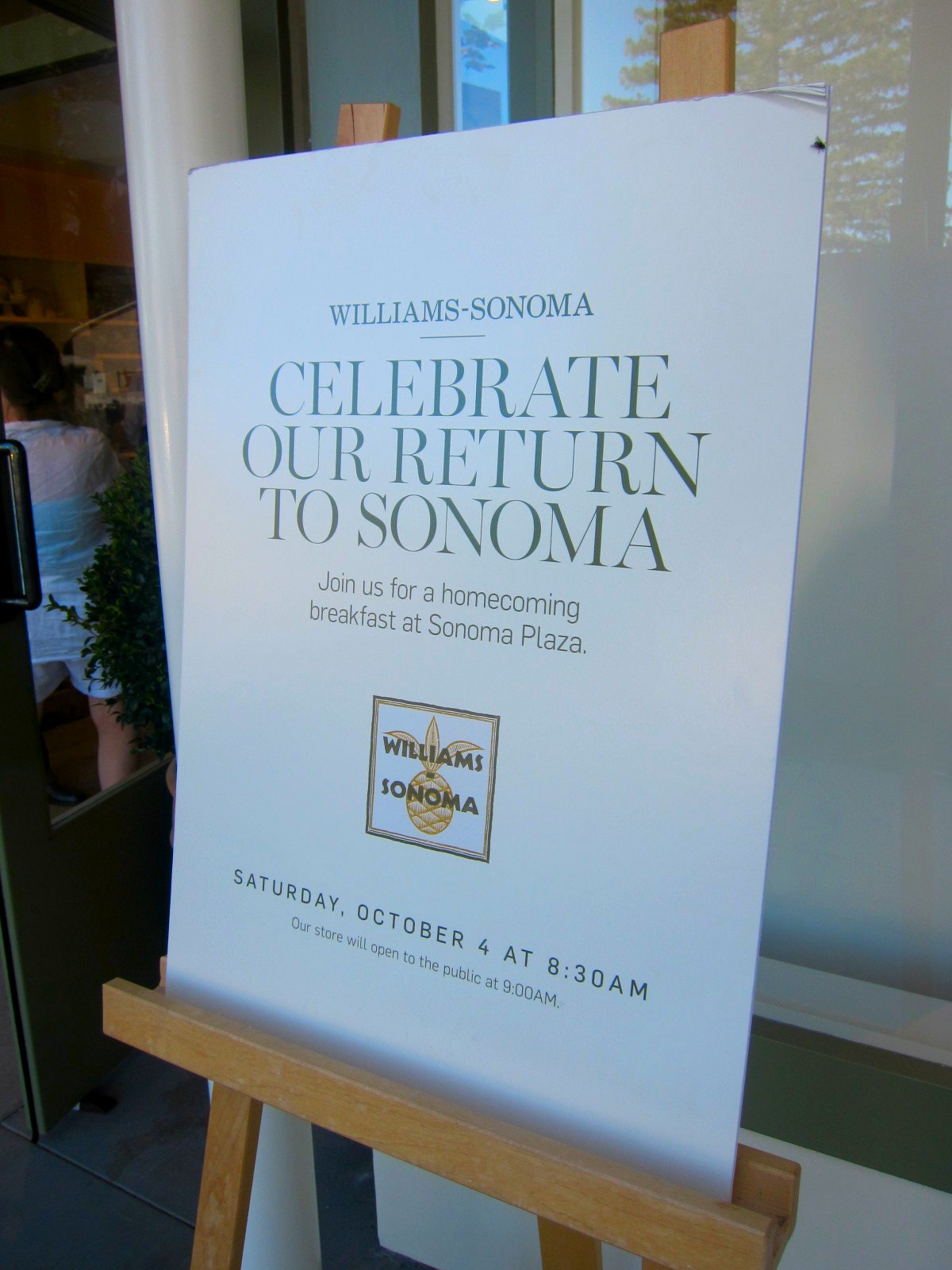 Home at last: A sign announcing the reopening of Chuck Williams' first shop in Sonoma, California, originally opened from 1956 to 1958
Photo: Chronica Domus


For any of my American and Canadian readers that have an interest in home cooking, they would have at some point in the past half century darkened the doors of America's premier culinary supply mecca, Williams-Sonoma. The company, whose stores are to be found in most metropolitan areas, stock a range of high-quality cookware and bakeware. One can find every conceivable piece of equipment required to build a batterie de cuisine to rival that of Antoine Carême.

The founder, Charles Williams, or Chuck as he likes to be called, was responsible for introducing American cooks to the finest, most practical and beautiful kitchen equipment, discovered on his travels as a young lad in Europe.

Mr. Williams opened his first shop in 1956 in the small wine country town of Sonoma, California. Initially, he sold only hardware but soon transformed the shop into a cook's paradise, stocking classic French kitchen equipment not found elsewhere. The emporium rapidly became a roaring success with a loyal following of enthusiastic home cooks and professional chefs alike. It soon became apparent that if the business was to further expand and continue showcasing the quality cookware Mr. Williams was introducing to the American market, he would have to relocate his shop to the big city. So, after two short years, the little shop in Sonoma was shuttered, reopening at its new location in the heart of San Francisco's shopping district. The rest, as they say, is history. 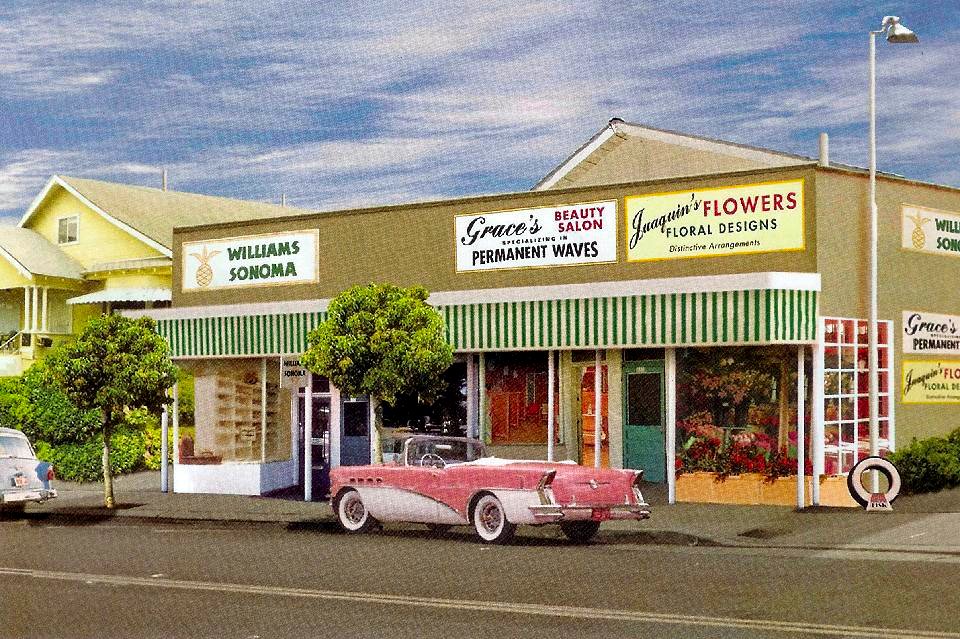 The original Williams-Sonoma shopfront, seen above at left, as it appeared between 1956 and 1958 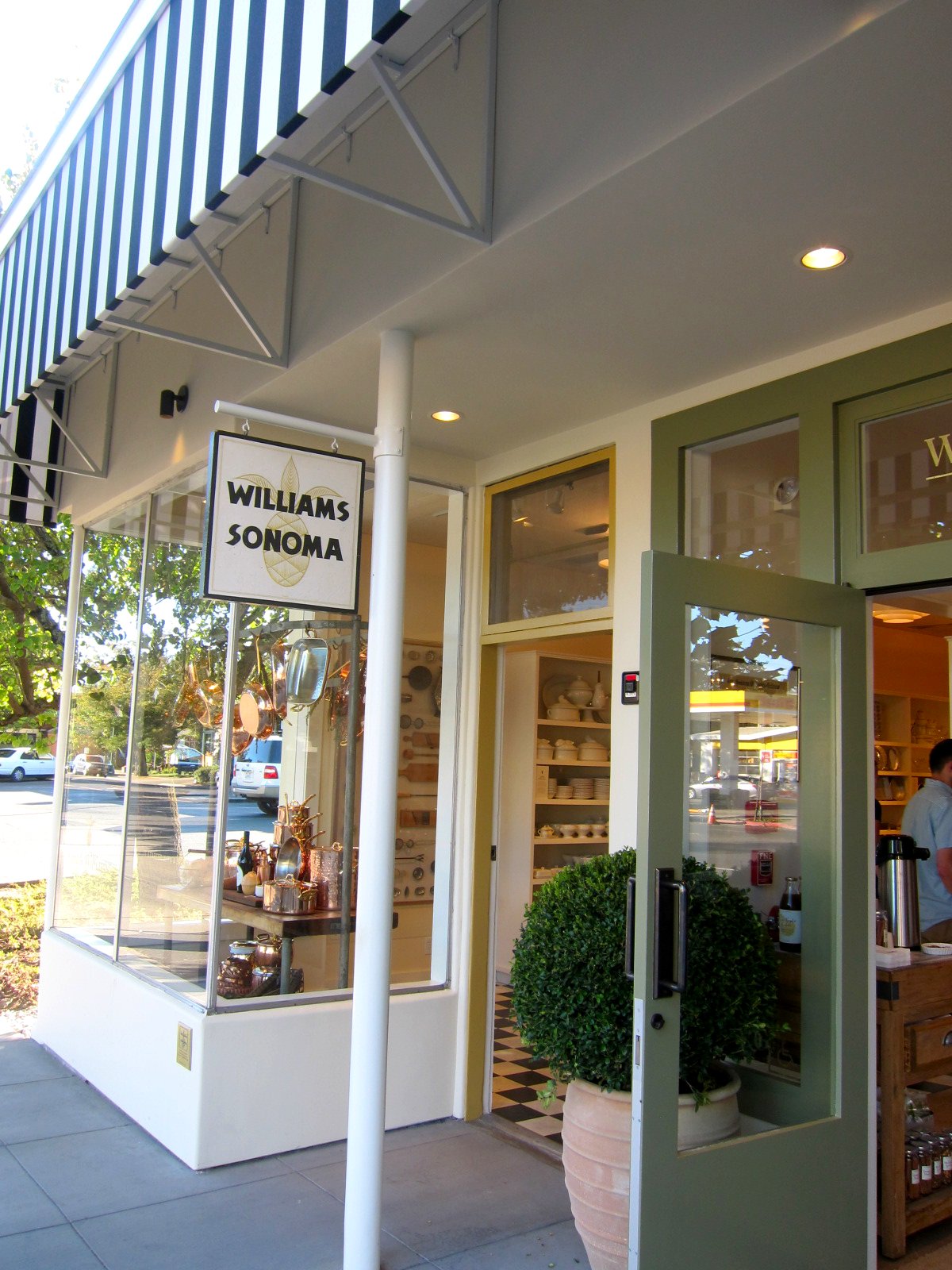 The shopfront as photographed on Saturday, October 4, 2014 during the re-opening celebrations
Photo: Chronica Domus


This past Saturday, Mr. Williams came home again. In celebration of his ninety-ninth birthday, the original Sonoma outpost was reopened to great fanfare, fifty-six years since it closed its doors. The Broadway Street location has been remodeled almost exactly as it appeared in 1958, with its simple white open shelving and classic black and white checkered flooring. Even the original shop sign has been reinstated and hangs proudly outside under the smart striped awning.

I say "almost exactly as it appeared" because the store has now expanded to fill the entire building and is divided into two parts; the original small shop front in replica form to the original, and the new addition of a cooking school off to the side. Mr. Williams' house, situated directly behind his shop, and which he once shared with his mother, has also been incorporated into the retail experience. Today, one can walk freely between the shop floor and the house, which has been restored and showcases the company's home goods. Mr. Williams' bedroom and office have been recreated, as has his private kitchen downstairs. 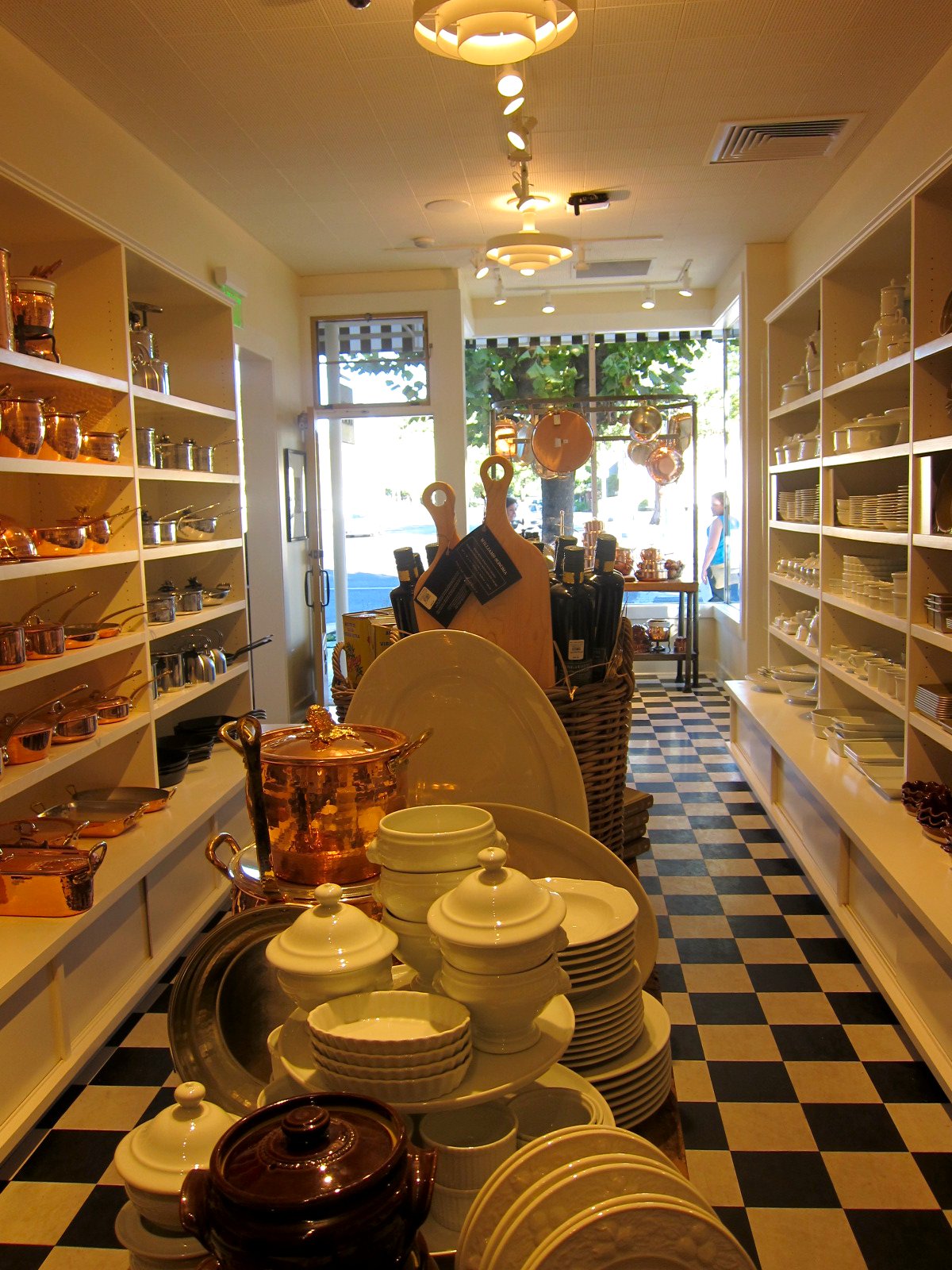 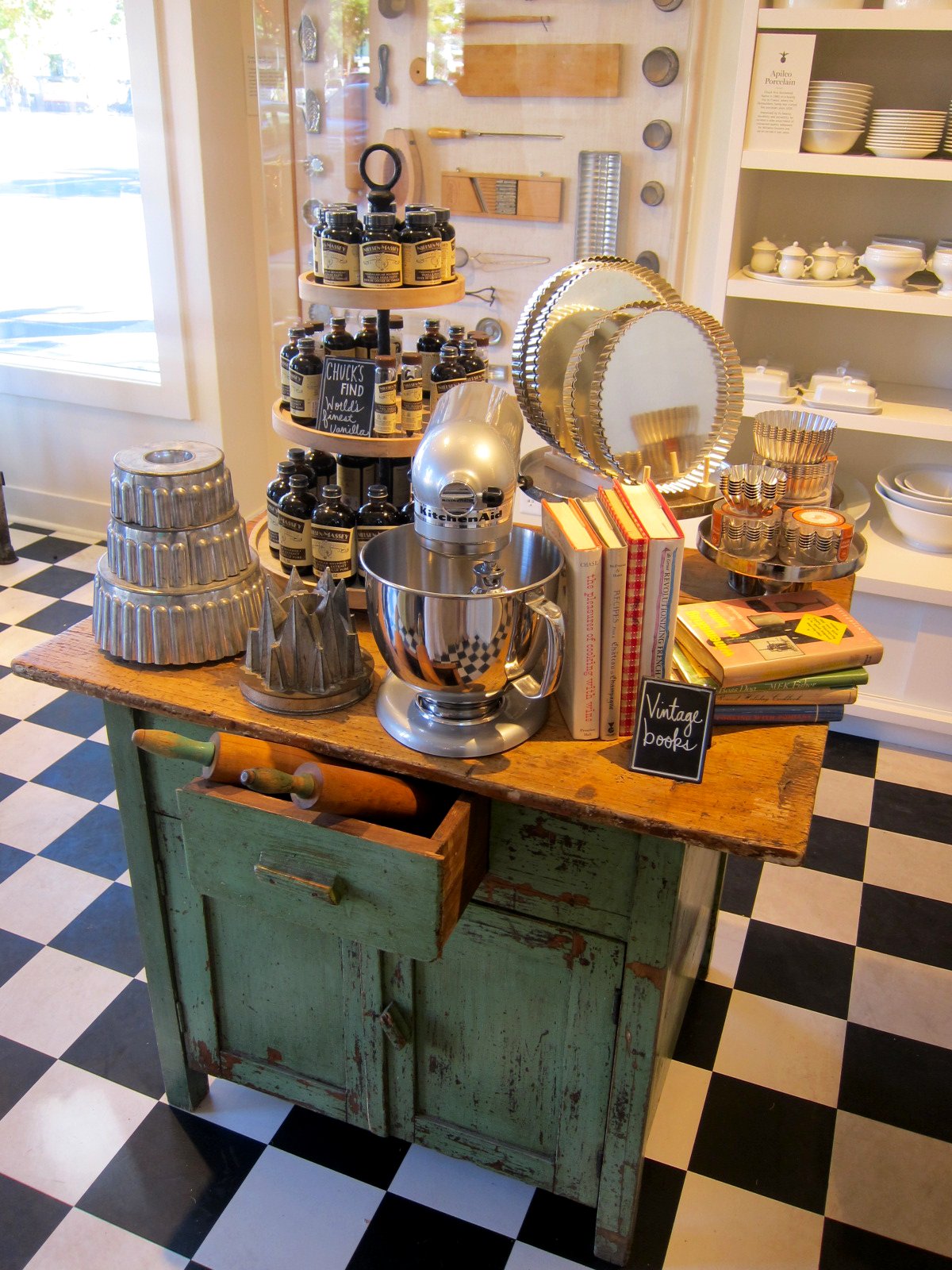 Vintage cake pans and unusual tin geometric food molds from the company's culinary archives are incorporated into the displays of new items and are available for sale
Photo: Chronica Domus 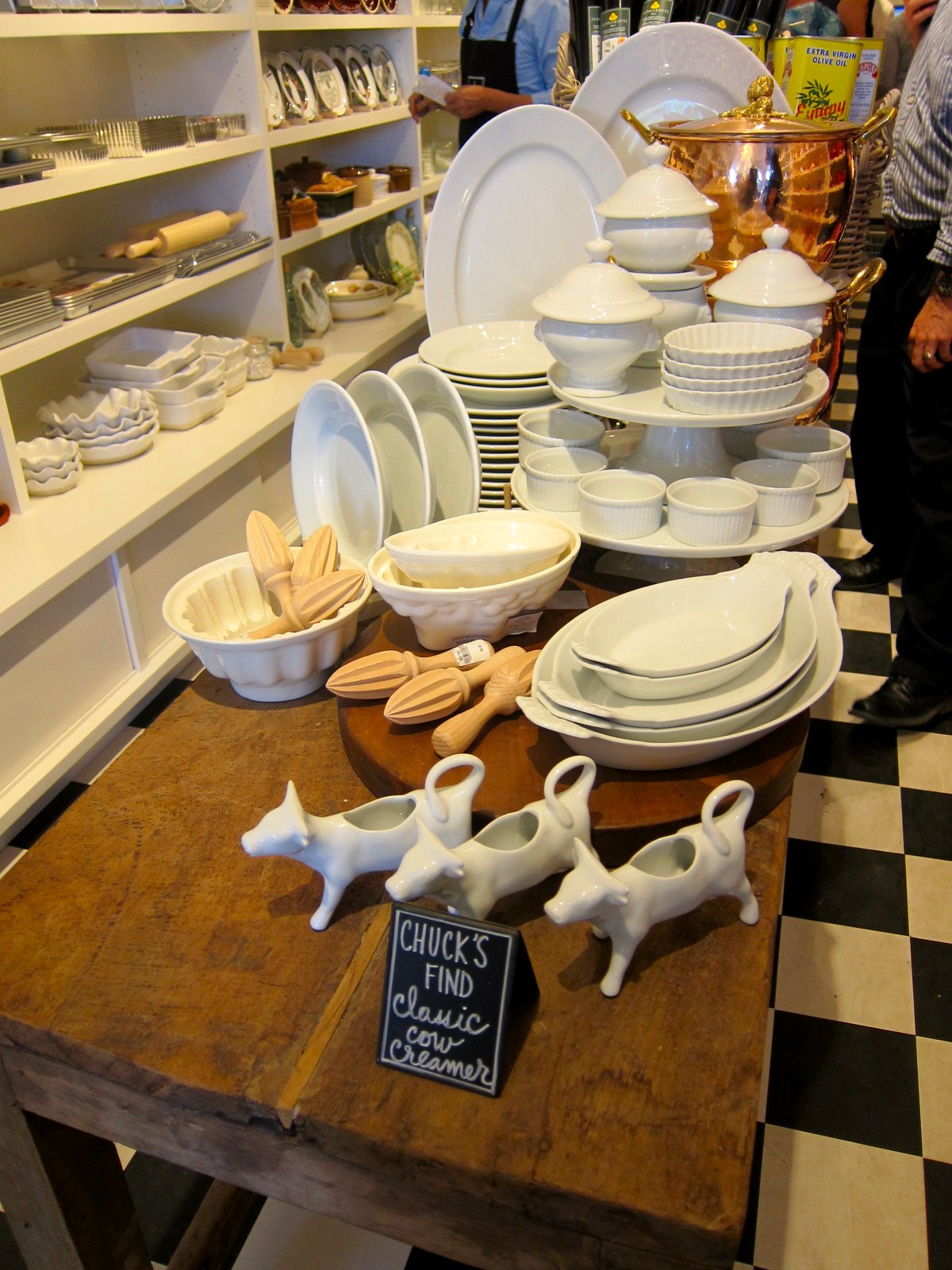 
Not only are new items to be found stacked on old wooden tables and lining the neat rows of white shelving, but antique and vintage items pulled from the company's culinary archives, and found by Mr. Williams in European antiques shops and markets, are also available for sale. I saw many covetable English copper jelly molds from the late 19th century, and several ironstone food molds that could have easily made their way home with me, but, alas, my cupboards are filled and my shelves are groaning, so one needs to be disciplined in such matters nowadays. 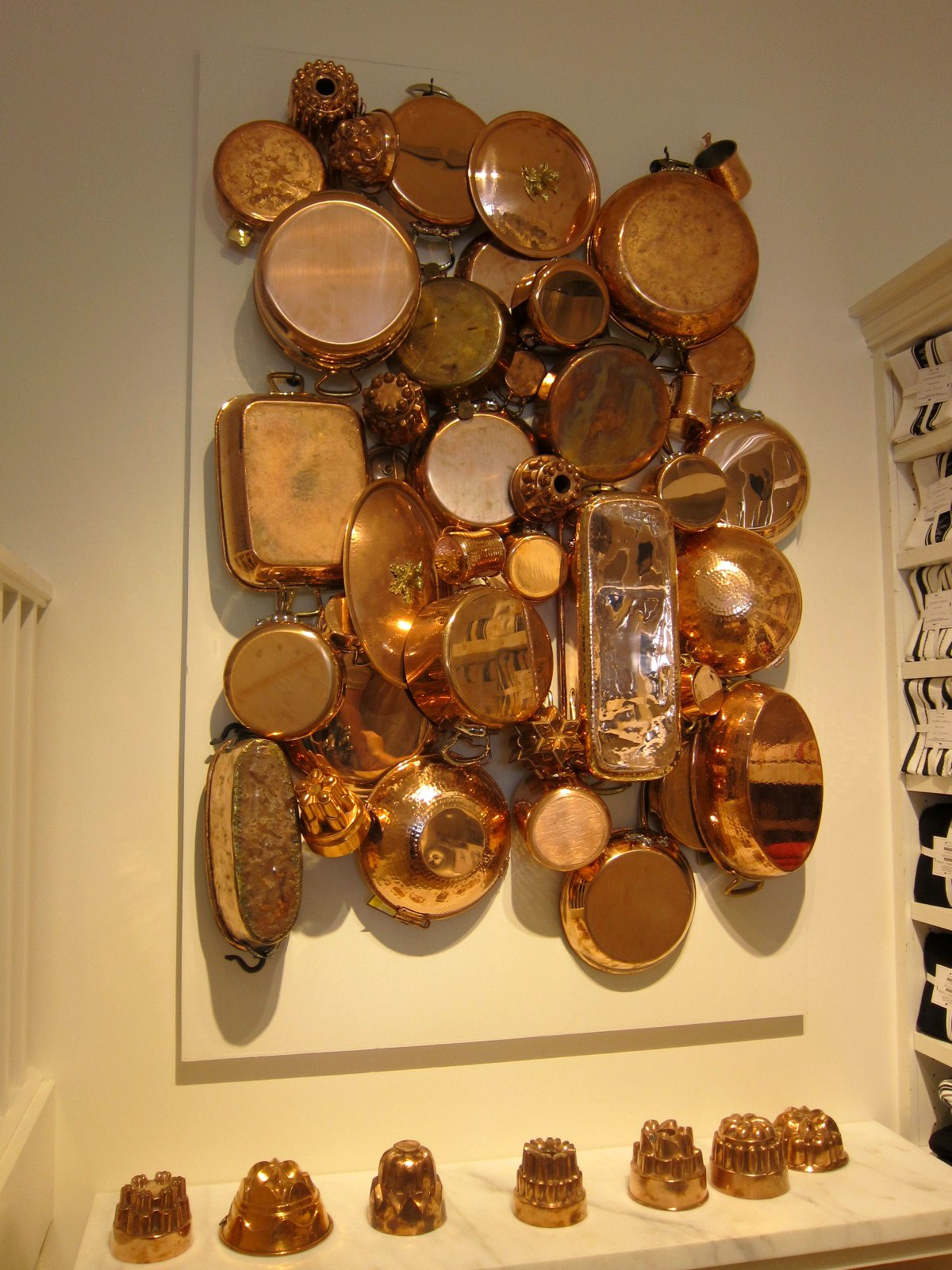 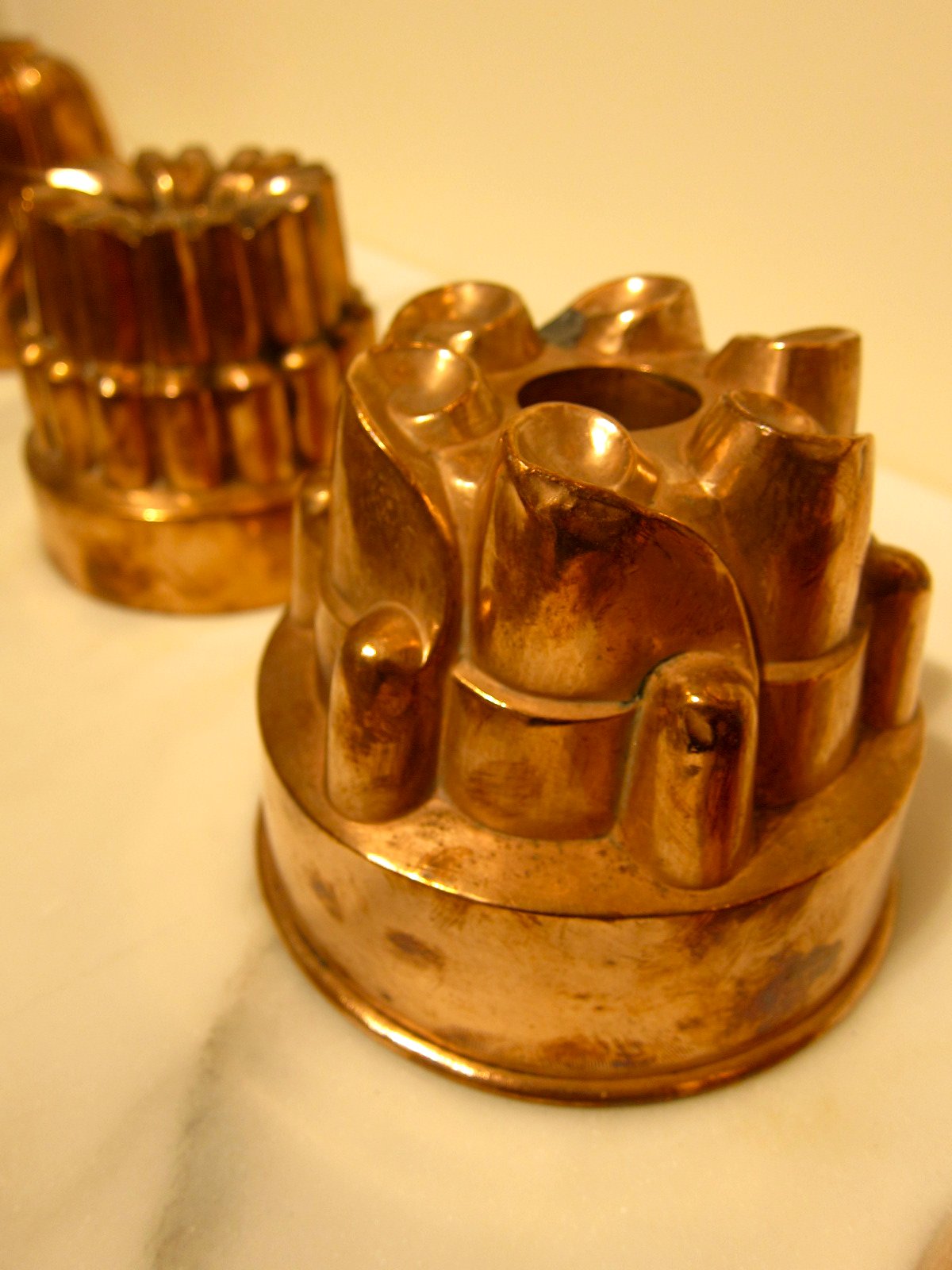 Beautiful antique English copper molds that had me quivering like a jelly
Photo: Chronica Domus 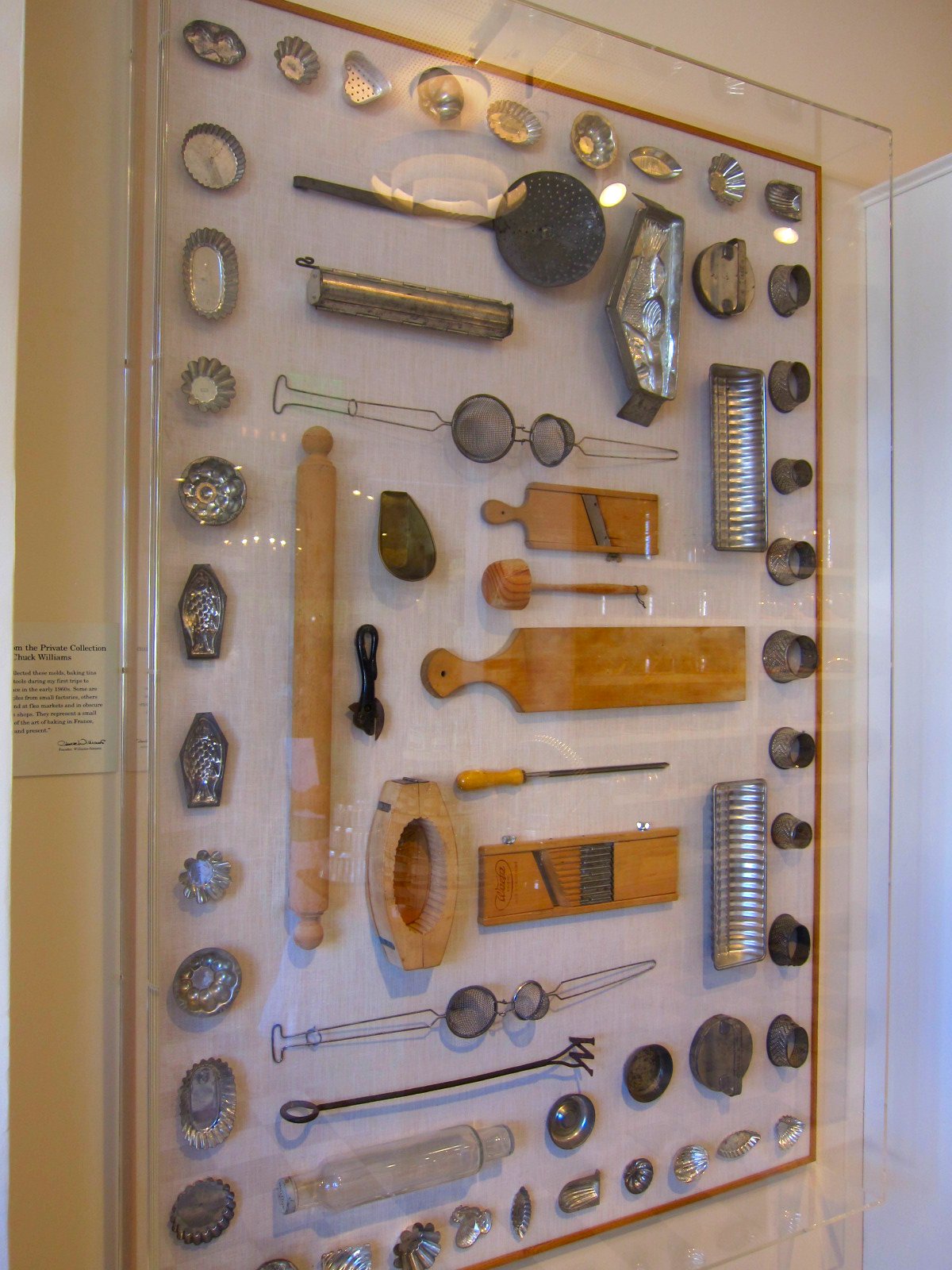 More vintage finds presented like a museum exhibit on the walls of the original shop
Photo: Chronica Domus


The newer area of the expanded premises is chock-full of other tools, gadgets, equipment, and ingredients required to whip up a feast fit for a king.  The impressive demonstration kitchen, where cooking lessons are taught to small groups, can also be found here. 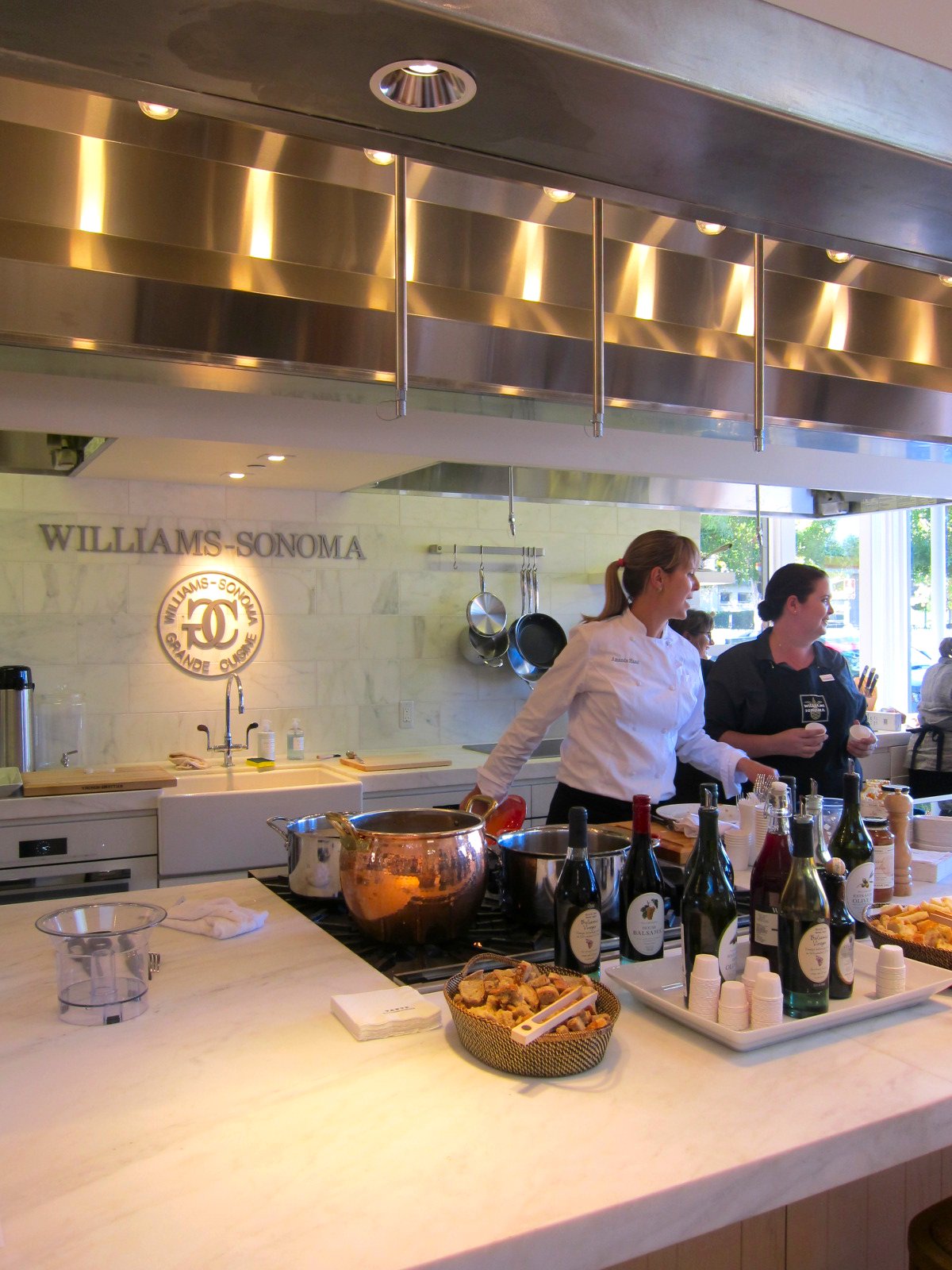 A view of the demonstration kitchen being used to concoct culinary goodies that were handed out to those attending the reopening celebration event
Photo: Chronica Domus 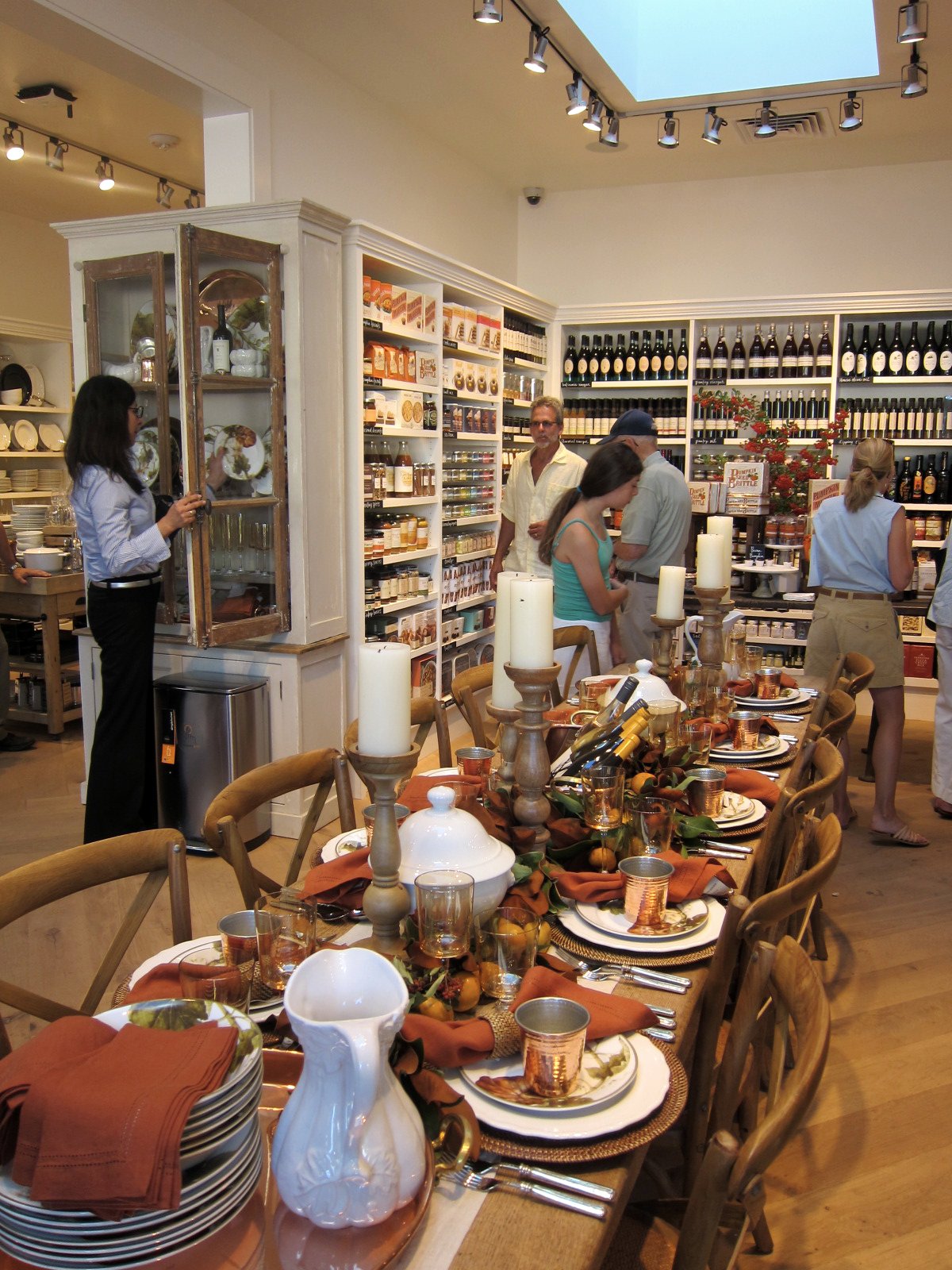 
Mr. Williams was a true visionary when he started his little business back in the 1950's and was instrumental in changing the way Americans cook at home. He was able to convince companies like KitchenAid, who supplied restaurateurs with their powerful mixer, to develop a version befitting the home cook, and also talk Le Creuset into producing their classic flaming orange colored cookware in a rainbow of colors that would appeal to a greater audience.

Hundreds of enthusiastic cooks and foodies made the pilgrimage to the reopening celebration this past Saturday in the sweltering heat of the Bay Area's Indian summer. Watching everyone buzzing about, examining the wares on offer and touring the shop, kitchen garden, and house in the back, one felt a sense of hope that perhaps the simple and grounding act of preparing home-cooked meals is still alive and well in a world where convenience foods abound, and when many of us eat out more and more frequently. Personally, Mr. Williams has made the preparation of my meals much more pleasurable and convenient by way of the many items he has deftly sourced for my kitchen over the years. Whenever my English relatives come to visit, they always ask to be taken to the flagship store on Union Square to shop for gifts and unusual tools to use in their own kitchens. Perhaps in the not-too-distant future, Williams-Sonoma will consider crossing the pond to introduce legions of British cooks to the delights of the many American culinary gadgets Mr. Williams has unearthed. 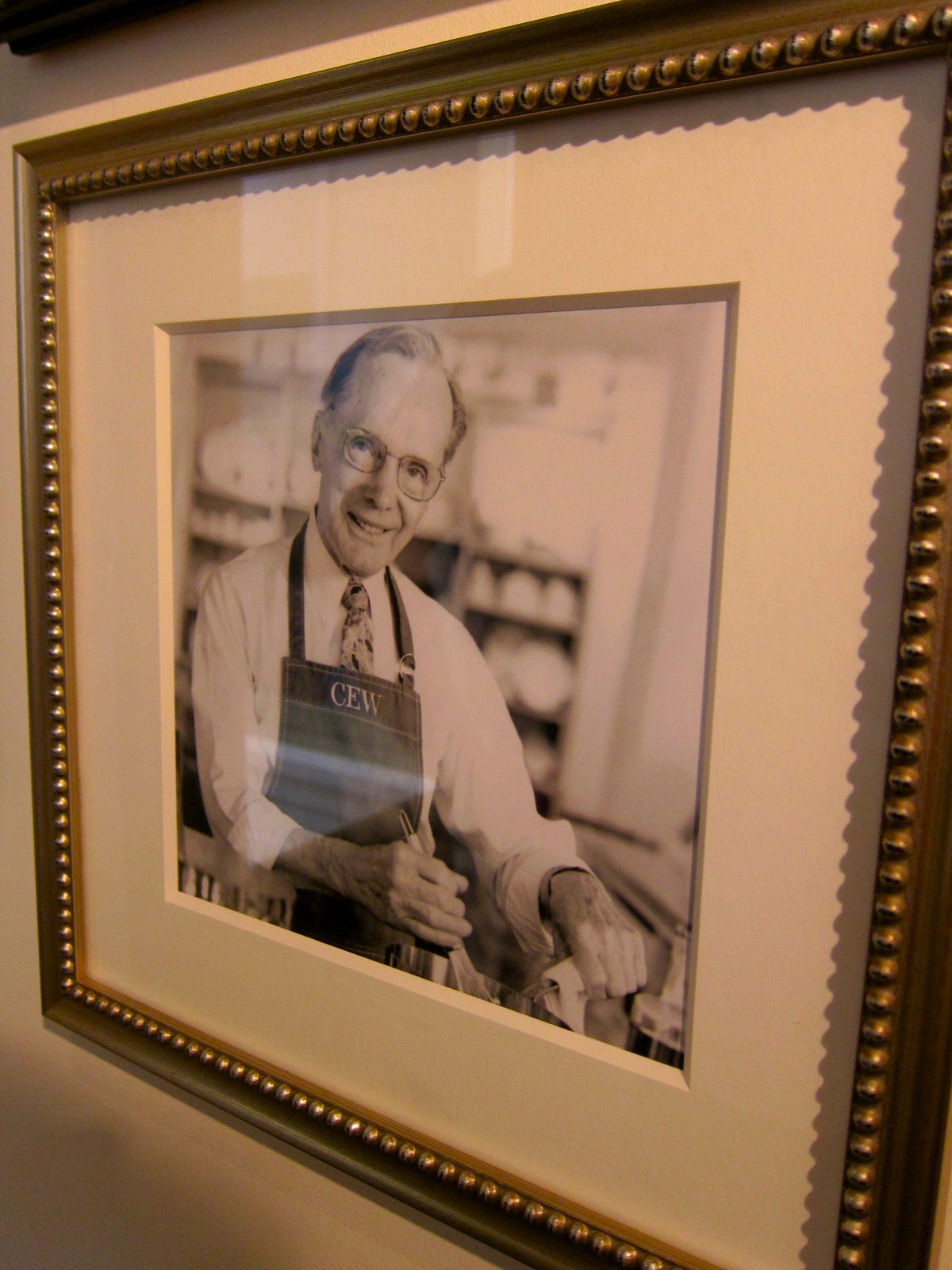 A framed photograph of Chuck Williams hangs on a wall in the back of the house along with many other portraits of him, newspaper clippings and company memorabilia
Photo: Chronica Domus


If you find yourself in the pleasant environs of California's wine country, I do urge you to add this marvelous little shop to your travel itinerary, especially if you, like me, enjoy dabbling in the kitchen.

Do you have a favorite kitchen gadget that you discovered on your travels, was passed down from a family member, or picked up at one of Mr. Williams' stores?


Nota bene: I am neither paid nor do I receive recompense in exchange for applauding products or services within my blog.  I do so because I enjoy them.  If you are a kindred spirit, you too enjoy recommending nice things to fellow good eggs.
Posted by Chronica Domus at 8:21 PM