George Washington In The Eye of The Beholder

Today, as America celebrates its independence, one cannot help but to think of the country's founding fathers and George Washington in particular, the young nation's first president.  Imagine what it must have felt like to lead an army of soldiers to victory and then head an independent fledgling nation as its leader.

Deeply respected both in life and death, George Washington is often depicted in portrait paintings and sculptural works of art with a justifiable amount of pride, typically wearing military garb.  Which is why when I first laid eyes upon Horatio Greenough's twelve ton marble sculpture I was all astonishment.

Was this really a likeness of George Washington that met my gaze, or some Roman impostor?  I had never seen anything quite like it and instantly delighted in its quirkiness. 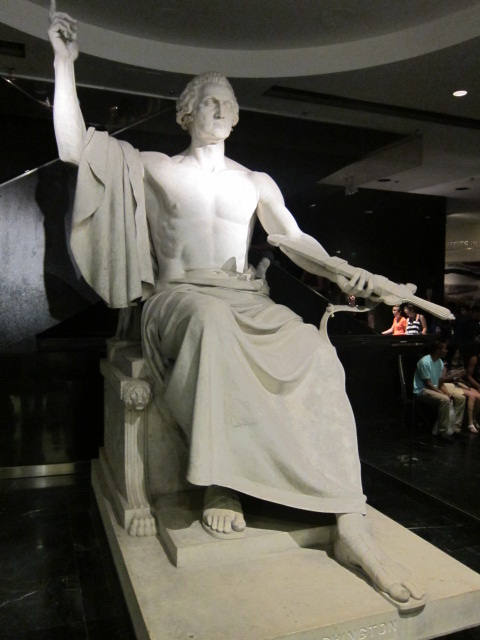 
Seated upon a throne, and resembling the Roman god Jupiter or the Greek Zeus in pose, the semi-naked Washington looks more akin to a mythical being than a mere mortal or an unwavering general. According to Kirk Savage, the author of the book Monument Wars: Washington, D.C., The National Mall, and The Transformation of The Memorial Landscape, the statue has become "...the most reviled public statue ever erected".  This could very well explain why it now sits in the National Museum of American History in Washington D.C. where I had the pleasure of viewing it firsthand several years ago.  I'm simply wild for it.

Greenough's statue was completed in 1841 and installed in front of the United States Capitol building where it remained until its removal in 1908.  I think it rather a shame that this striking and imposing depiction of George Washington had become the butt of many a joke in America. Clearly Greenough's portrayal is intended as allegory at a time when the young nation was still finding its feet, taking aesthetic cues from democracies of the ancient world.  At the base of the statue, toward the rear, an inscription in Latin reads "Horatio Greenough made this image as a great example of freedom, and will not survive without freedom itself".

As I've already stated, I find this particular incarnation of George Washington rather wonderful. Perhaps it is because I have always had a soft spot for classical art and architecture. The statue reminds me of the countless ancient examples I've had the privilege of viewing on trips to Italy and Greece, and those found in the British Museum and beyond.

What's your reaction to this statue - like it or loathe it?

I wish you all a very happy Independence Day.