There is something so endearing about this time of year here in Northern California.  The dregs of summer are barely holding on in the garden with the last few tomatoes clinging to the withering vines, and a final clutch of cheery summer nasturtiums offering themselves up for gathering just as autumn creeps upon us. 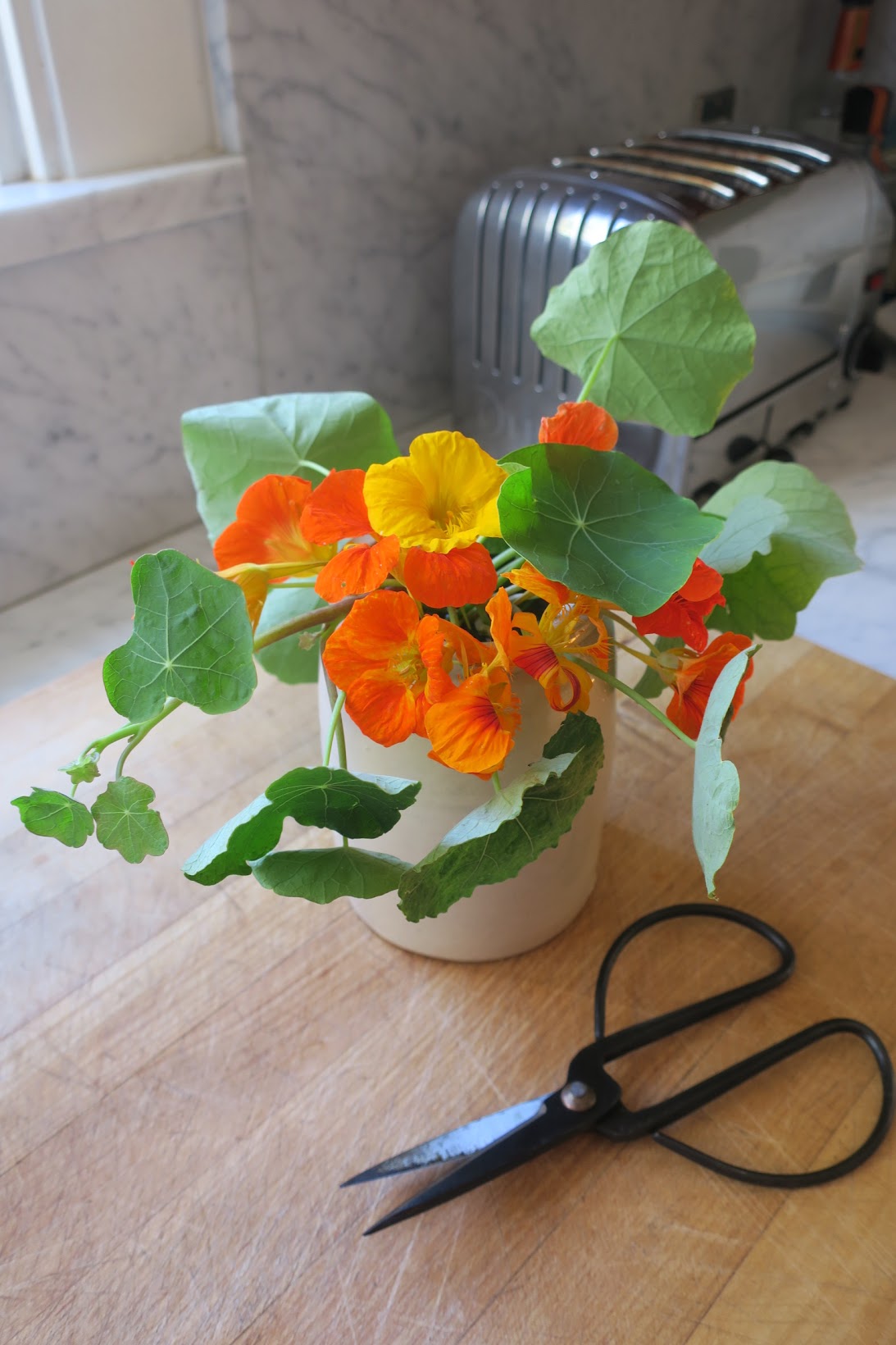 Summer's last nasturtiums gathered this morning and placed in an earthenware
vessel to brighten up the kitchen
Photo: Chronica Domus 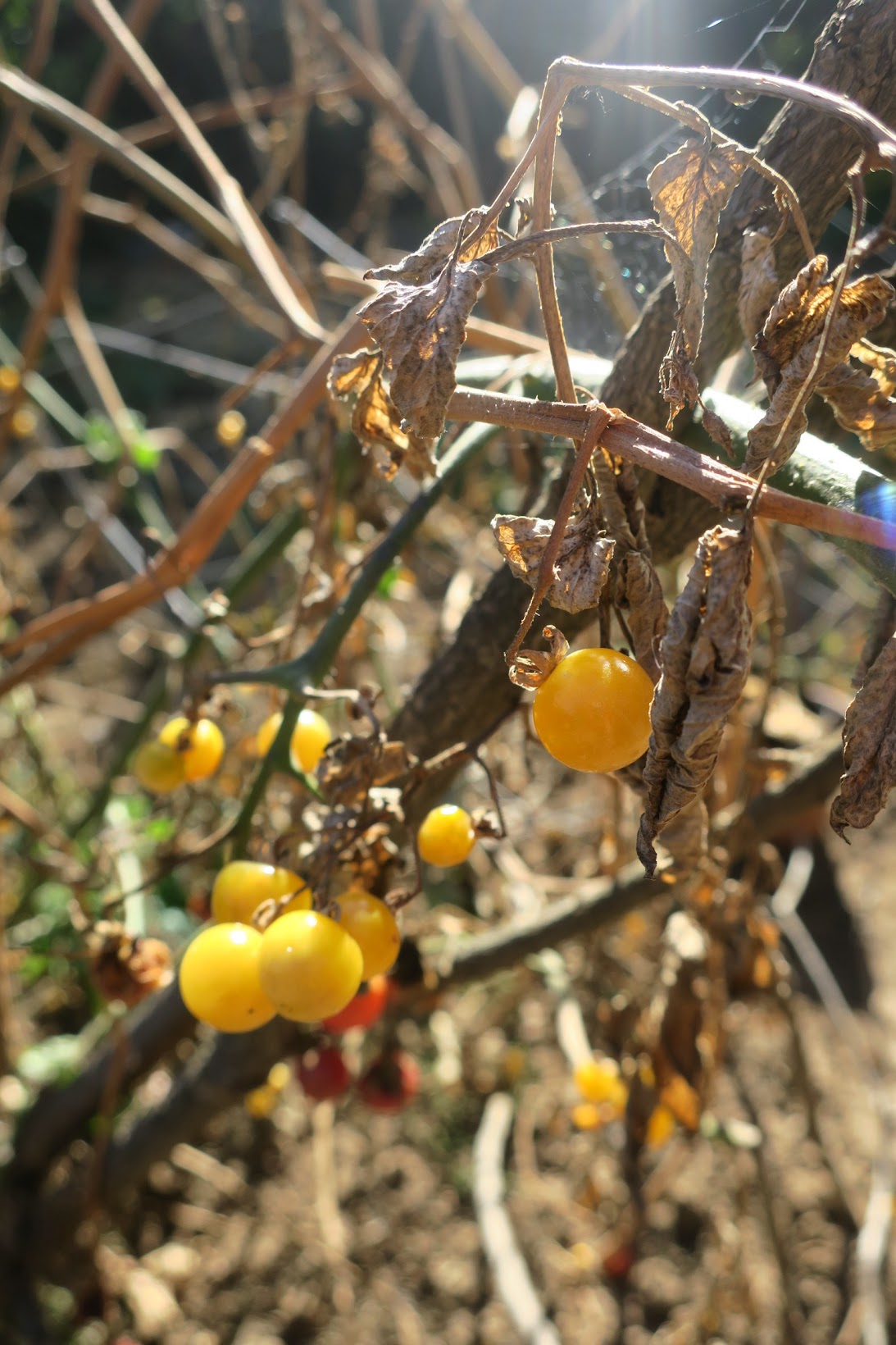 
The subtle signs of autumn play 'peek-a-boo' with the foliage.  Look here!  The first wisteria leaflet splashed in warming shades of amber. 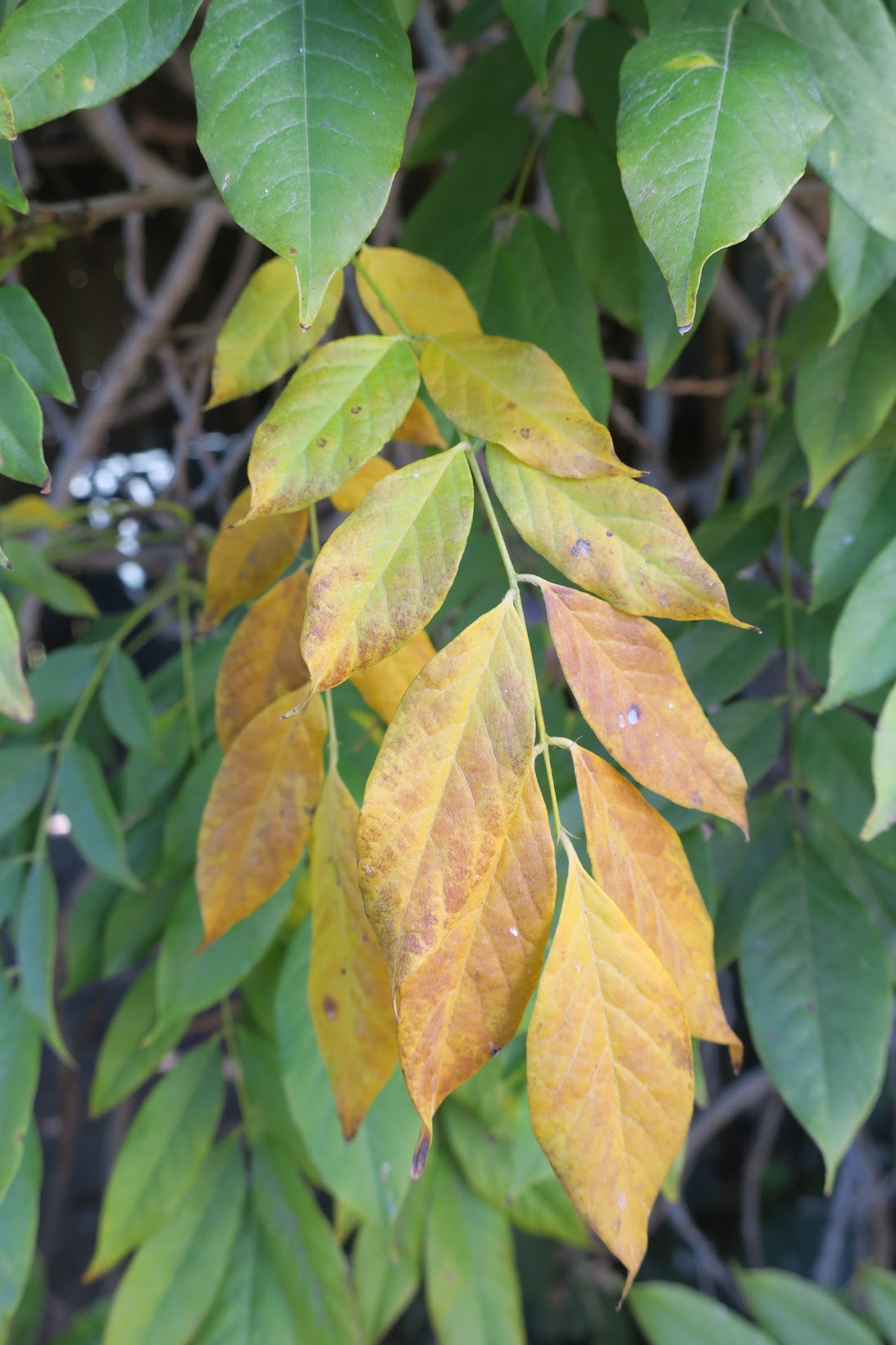 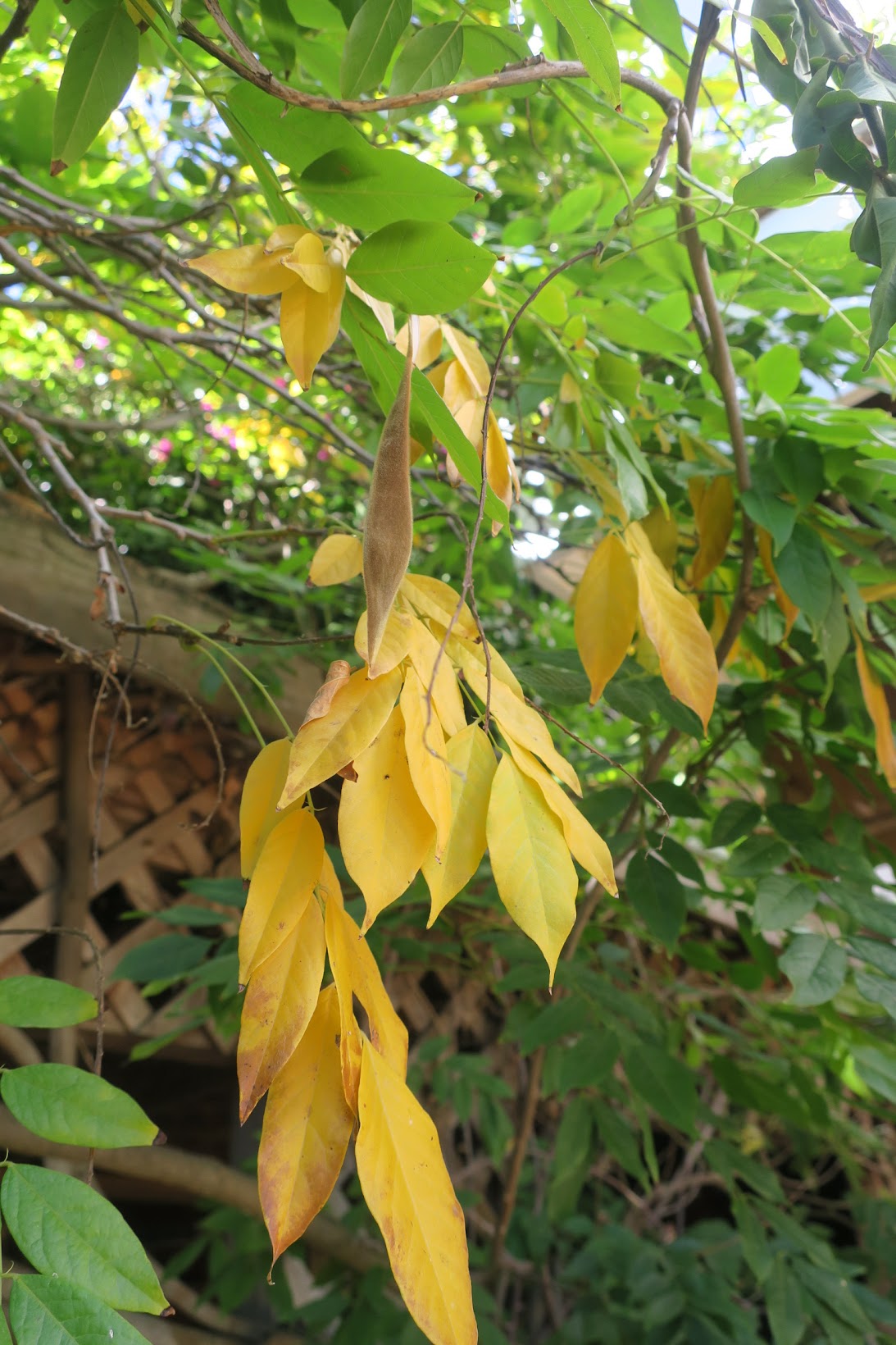 
It's funny to celebrate the colors of these few turning leaves when I think back on childhood memories of knee-deep piles of them, blown across from the woodland, only to settle in the front garden. There were many October Saturday mornings spent raking seemingly endless piles of oak leaves into the wheelbarrow in the company of my two younger sisters and my father.  We made a game of it so that what would otherwise have been a wearisome task became a fun but exhausting rite of autumn.

Of course, that special golden light that rakes across our house in the afternoon is yet another undeniable signal that autumn is here.  The intensely saturated sunsets too have been nothing short of spectacular as of late.  I captured this one a few weeks ago on our travels home across the Bay. 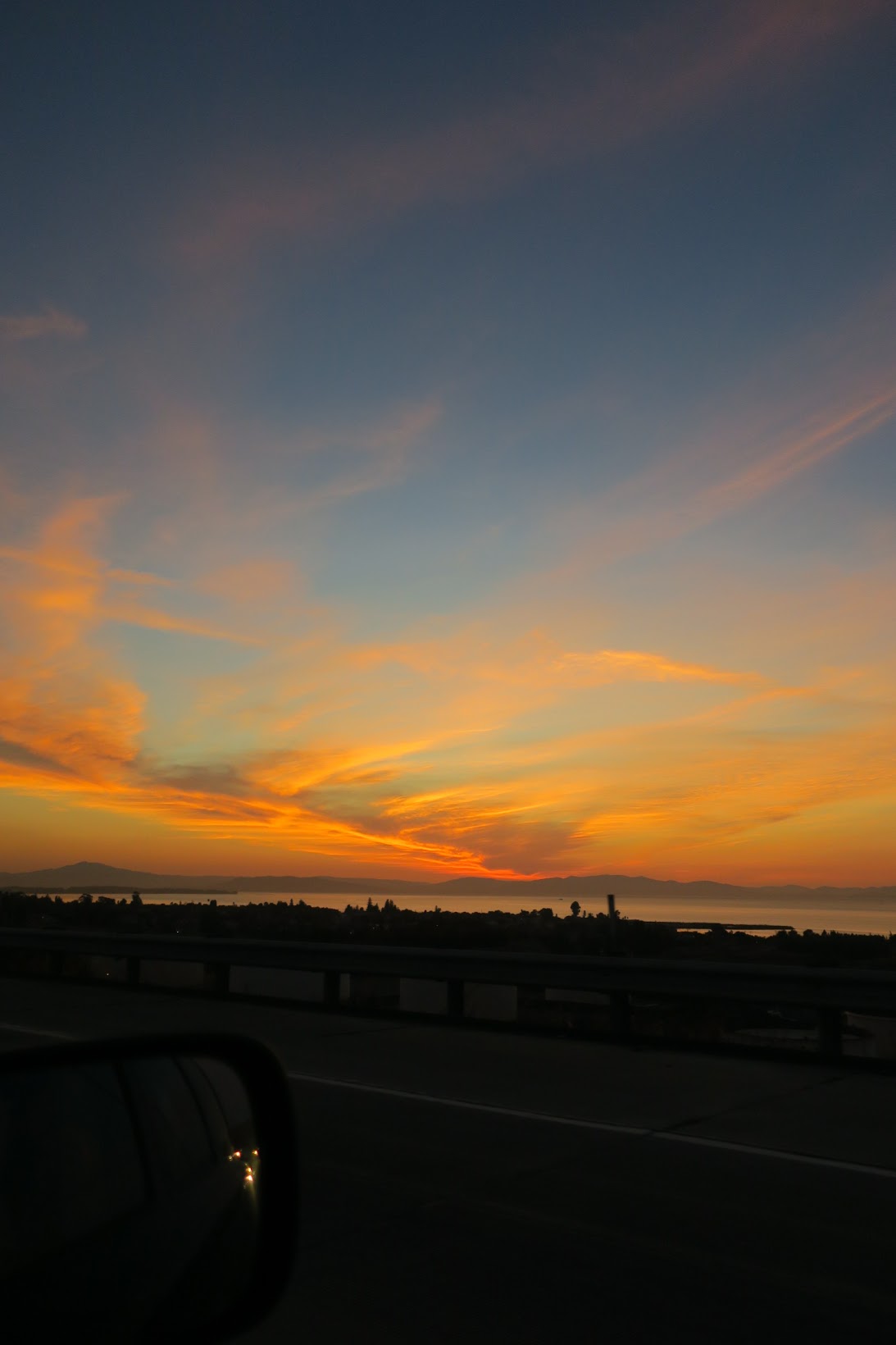 
And, although our daytime temperatures are mild at present, I am certain all of that will soon come to an end.  Last night was the first night I felt as though I needed a blanket to get me through the cooler night air.

How is it where you live?  Are you betwixt the seasons or did autumn arrive on cue with the calendar, in the latter part of September?  Please, do tell me.

I've spent all of Friday and Saturday fretting over this little fellow: 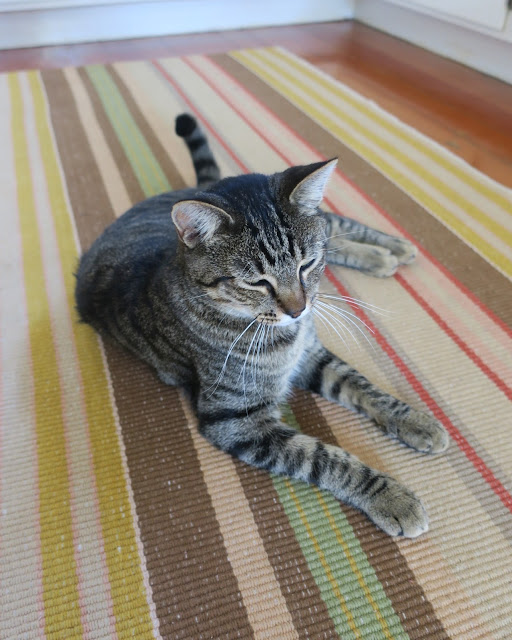 
I last saw him darting out of the balcony door as I sat down to dinner with my family on Thursday evening.  Our little friend Norton is both an indoor and outdoor cat and spends most of his waking hours in the garden basking in the sunshine and keeping company with another feral stray that took up residence there a few years ago.  At dusk, he makes his way into the house for cuddles and then onto bed.   Occasionally, he is nowhere to be seen when we turn in so remains outdoors overnight, greeting us first thing in the morning with a "meow" that signifies it is time for breakfast.

Norton failed to appear on Friday morning but I didn't think much of it.  However, by Friday night my usual sunny disposition took a backseat to an uncomfortably uneasy feeling that something was not quite right.  After fruitlessly searching the neighborhood on foot and knocking on neighbors' doors, my husband and I drove to the nearest animal shelter in case someone had found him and dropped him off.

I cannot express enough how terribly gut-wrenching that experience was.  Being guided through four very packed "Lost and Found" rooms of surrendered or stray animals while searching for Norton was nothing short of depressing.  Animals housed in the smallest imaginable metal cages, stacked one on top of the other, with no human contact ("No Touching Allowed" signs are everywhere), was more than I could handle.  I was moved to tears.  Asking the animal technician about those poor creatures, we learned that the animals are held for four days, then medically and temperamentally assessed before being "processed" for adoption.  Some, unfortunately, never see the light of day again.  The dogs were housed separately so I can't speak to them, but the animals we saw were mainly kittens and cats, rabbits and, would you believe it, chickens.  Frankly, I was taken aback - nay shocked - at how many grown rabbits had ended up in this pitiful place.  I imagine most were given to children at Easter and discarded once fully grown by parents coming to the realization that these adorable sentient creatures require care and attention and are not just trinkets to be included in their child's Easter basket.

I fully understand that animal shelters do wonderful work for the thousands of homeless animals and former pets that require rehousing.  However, the very fact they exist at all speaks volumes about our attitude towards animals.  I can only implore those that wish to add an animal companion to their lives to please consider adoption first, to spay or neuter (I shan't soon forget the sight of a nursing mother cat and her litter of kittens crammed into one of those metal cages at the shelter), and to know that animal companions are for life.  Some, in fact, are destined to outlive us so provisions for their care should be considered long before we've shuffled off this mortal coil.

Not finding Norton at the shelter was encouraging.  Perhaps he'd just strayed from home and lost his way and would take a little longer than usual to return.  By Saturday night, however, that glimmer of hope was rapidly fading.  He'd never before strayed from home for three consecutive nights.  Would I ever have the pleasure of seeing his sweet little face again?

Worry had kept me up most of the night.  Before anyone else in the household was awake, I headed outdoors to scour the neighborhood once again.  As I was about to leave, I was met at the door by Norton.  I momentarily imagined I had seen him, like some feline phantasm, but no, it really was Norton.  He let out his familiar "meow" greeting which was just enough to convince me that my mind was not playing tricks on me. At long last, Norton had returned, cold and hungry but seemingly unharmed. What a glorious Sunday surprise! 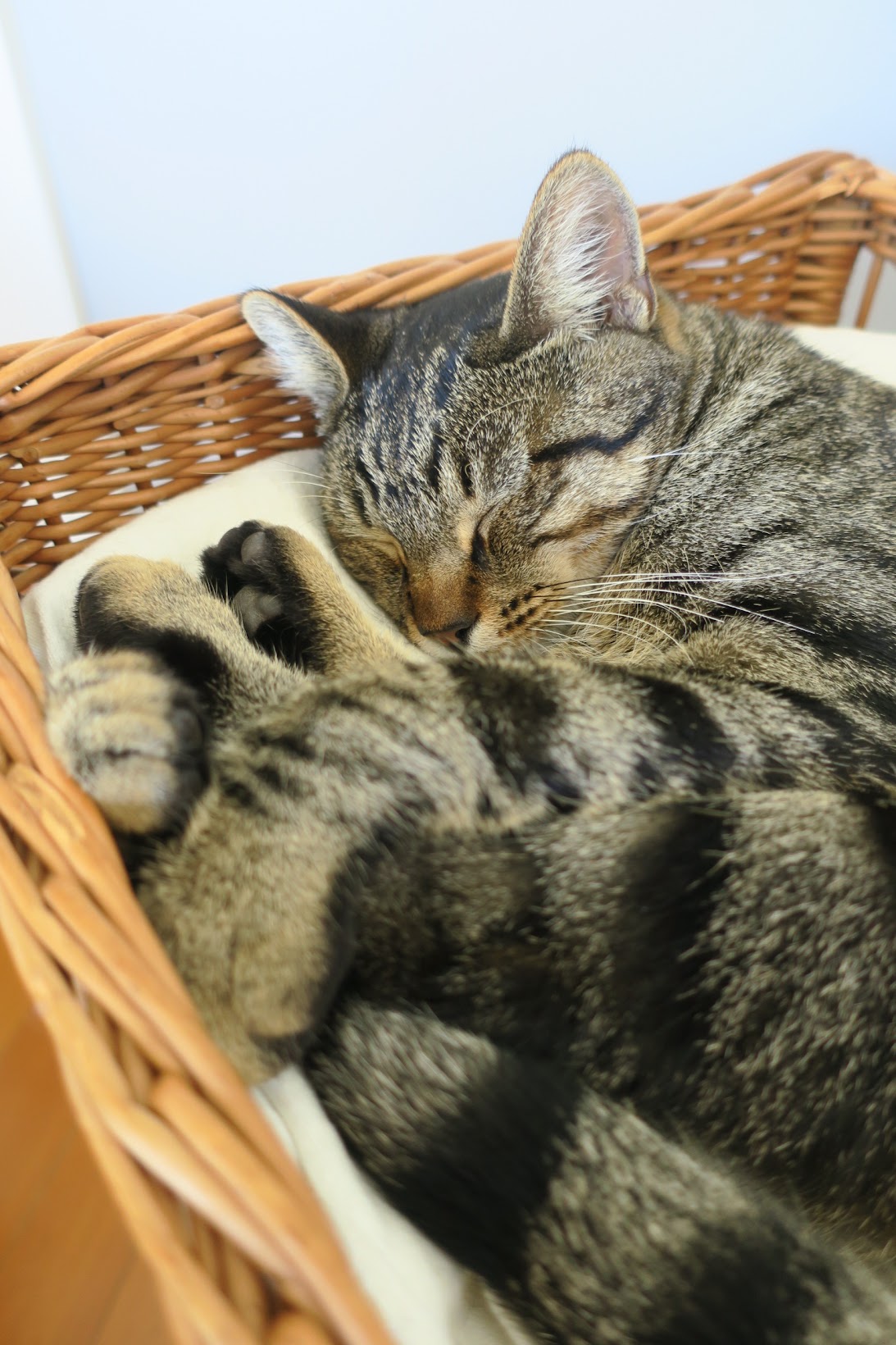 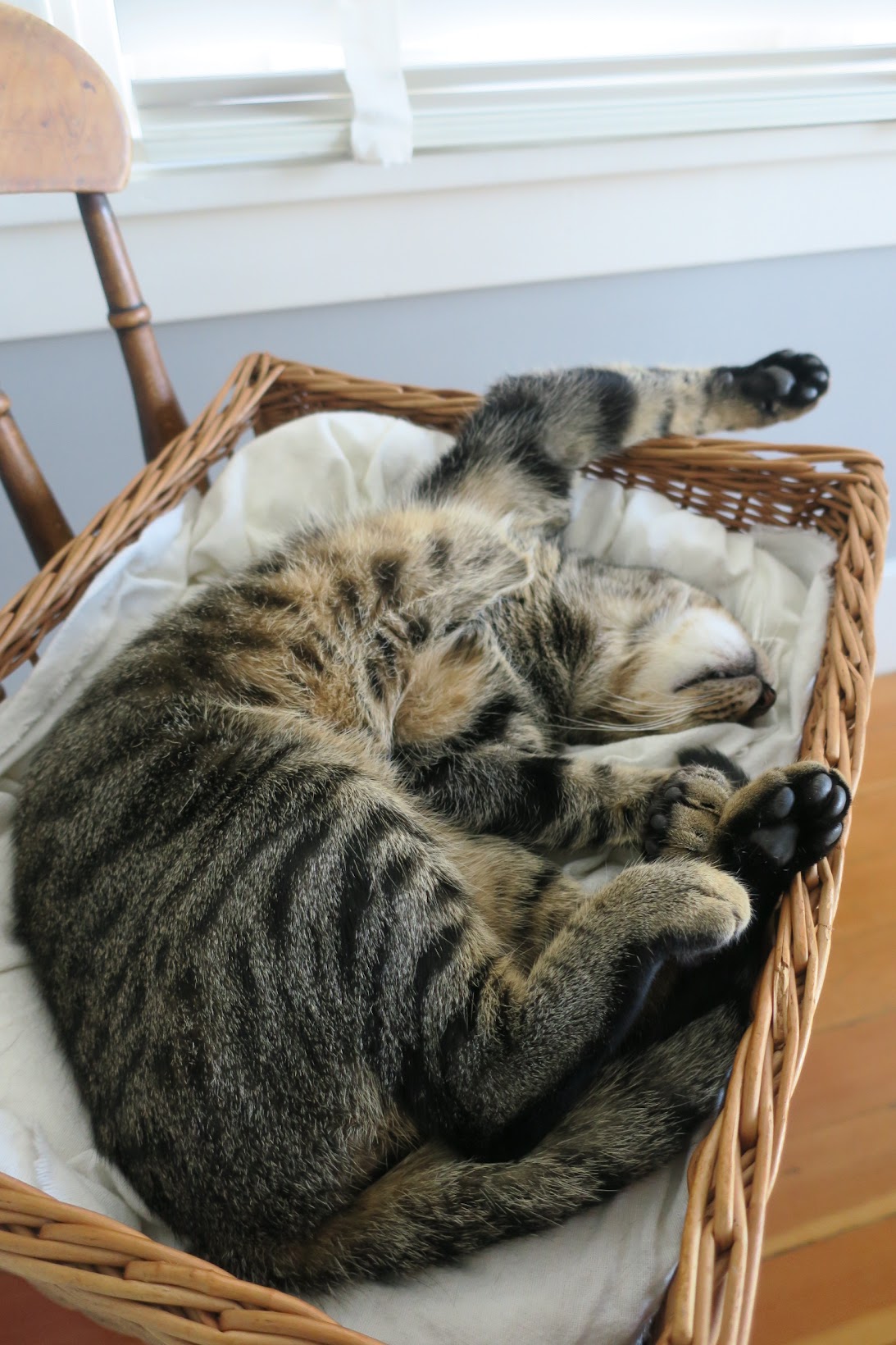 
As I sit here at the breakfast room table tapping away at my keyboard on Monday morning, Norton is nearby keeping me company.  He's been indoors for over twenty-four hours and, I think he likes it that way.  At least for now.  I wonder what it was that kept him from us for so many nights, and where his travels took him, and what he saw?  I joked to my husband that his disappearance must have been a celestial trick. After all, Norton did fail to return home on Thursday evening, the night of October's orange Harvest Moon which, for those that saw it, was spectacularly large, hanging low over the night sky.

Whatever caused our dear little friend to take his leave of us, we are full of joy at his safe return and most grateful to be reunited.  I only wish those dear little animals at the shelter also find good homes to live out the remainder of their lives.  Our pets sure do have a way of giving us a few gray hairs.