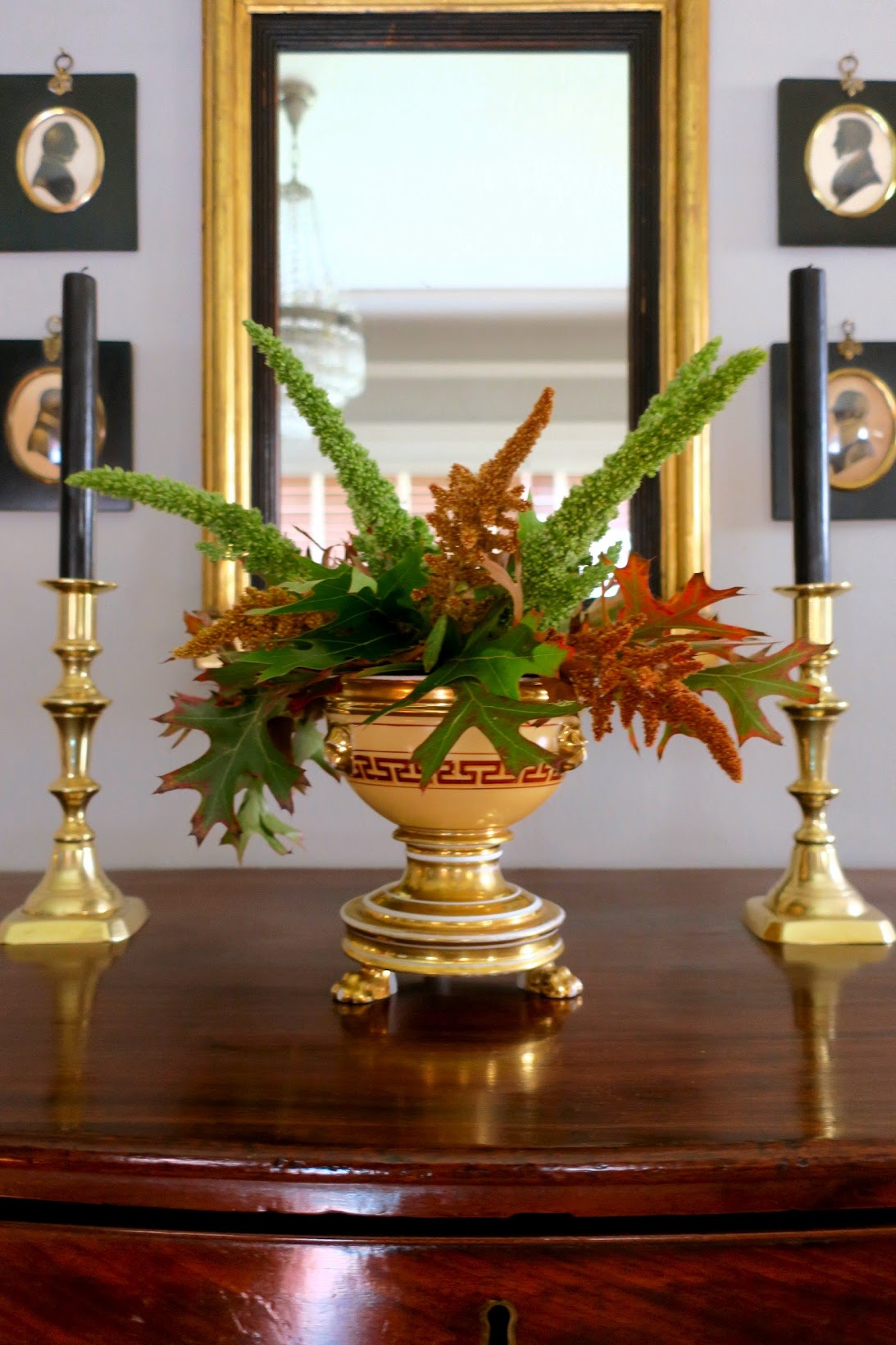 An arrangement of amaranth and pin oak leaves held in a Paris Porcelain confiturier adds an autumnal note to the drawing room
Photo: Chronica Domus

My favorite holiday is upon us once again, Thanksgiving.  I just adore the concept of setting aside a day each year to count one's blessings and revel in the companionship of friends and family over a feast of tasty home-cooked fare and flowing libations.  As a Brit now living in California, I've wholeheartedly embraced this very American of holidays and wish that all nations would dedicate such a day of thanks and reflection.  It really is rather grounding.

Last year, we did not get an opportunity to host our annual Thanksgiving dinner, which we share with our closest friends and family.  We jokingly refer to this as our 'Annual Thanksgiving Dinner Party for Waifs and Strays'.  This year, we are back in the saddle and raring to go. 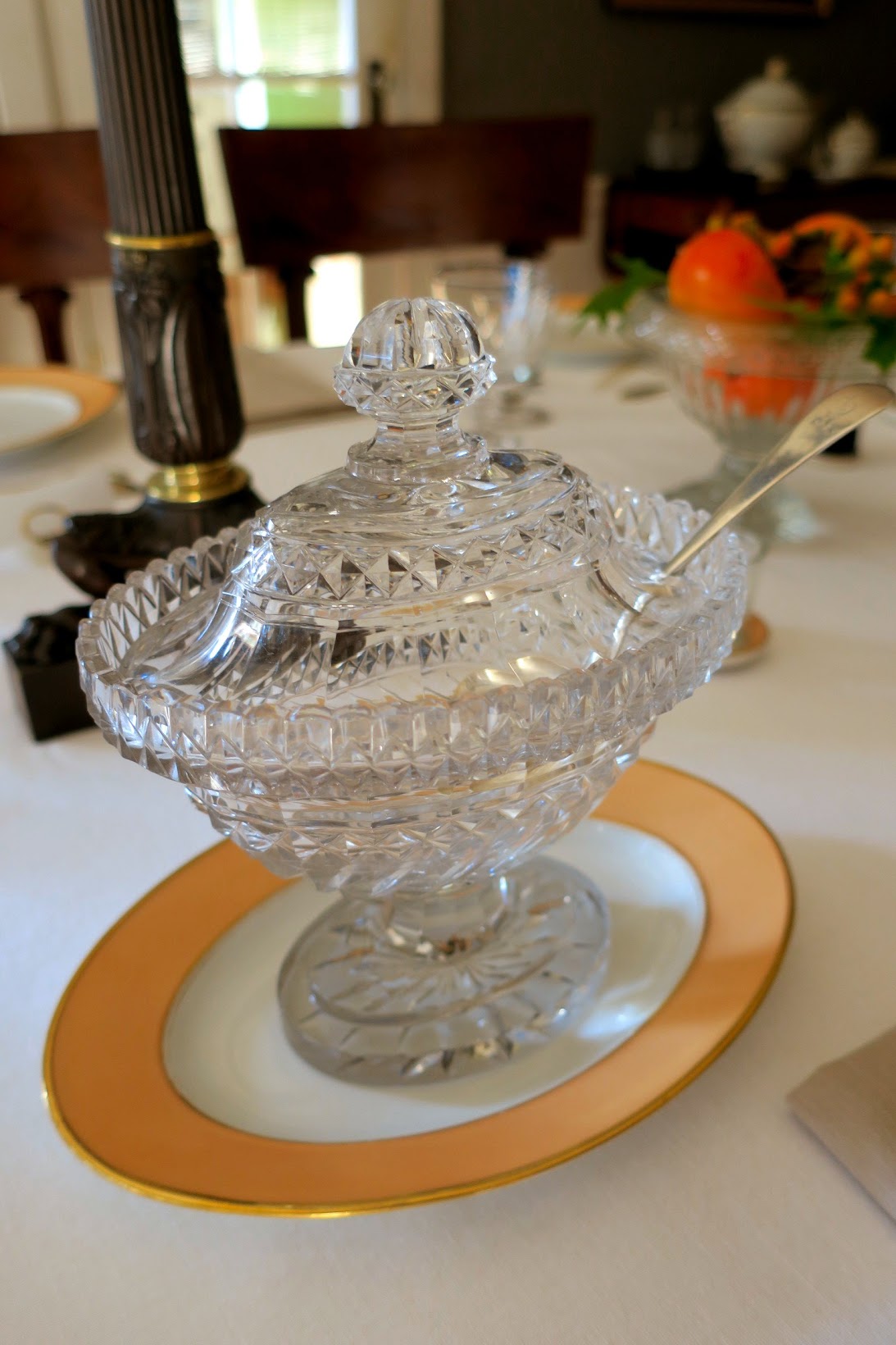 Shortly, my husband will be placing the brined turkey into a hot oven.  I'll be filling my recently acquired old sauce tureen with the delectable port and fig cranberry sauce I wrote about last year, and fussing over the other small details of the table before our guests arrive. 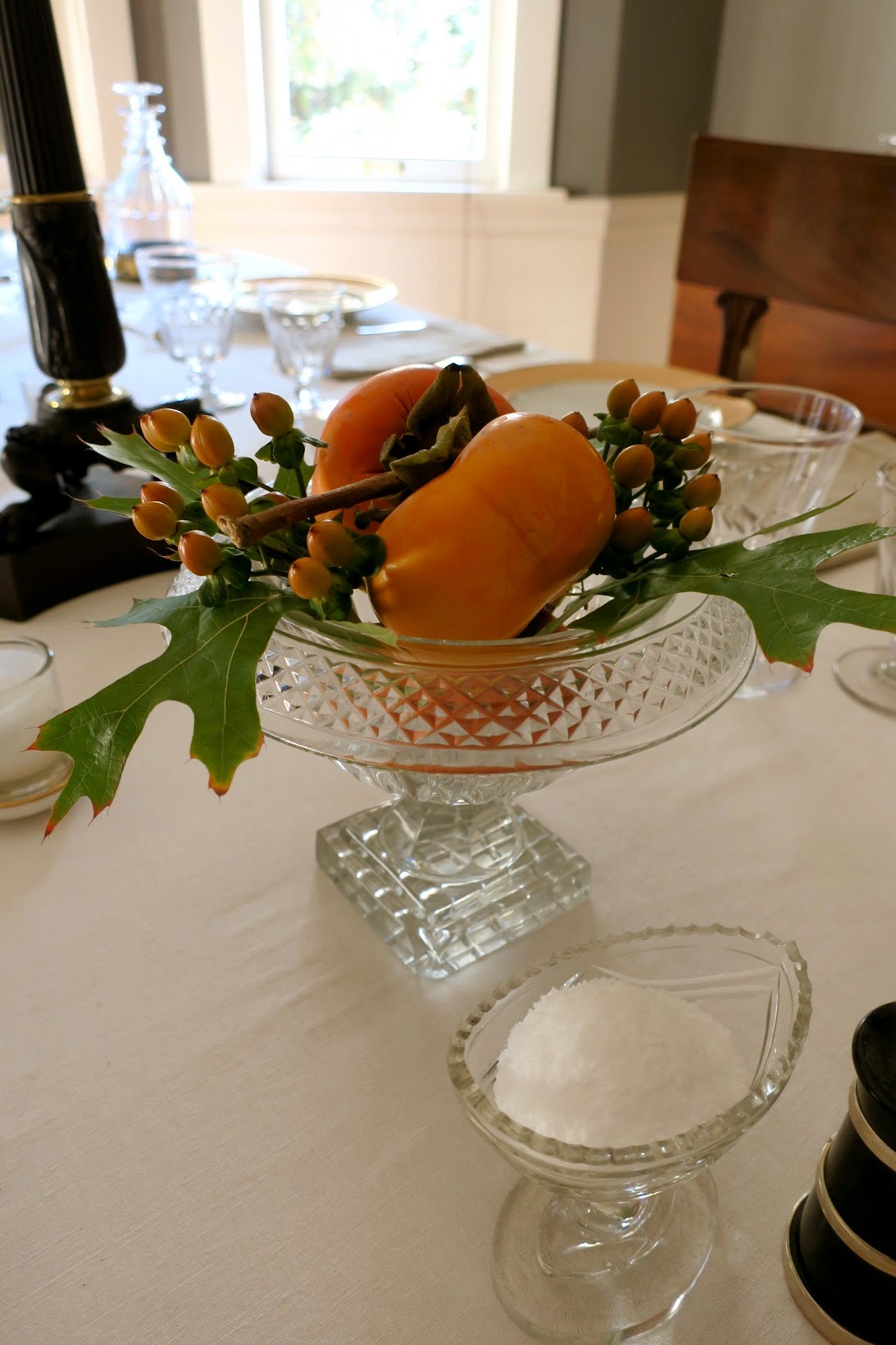 
I wish you all a very happy Thanksgiving holiday wherever you might find yourselves today.  I have much for which to be thankful, and hope you do too.  Now, I'd better get my skates apron on and get myself into the kitchen if everything is to be ready before the arrival of our guests.

End of An Era: Farewell My Pretty Boys!

It was with great sorrow last week that my family and I said our farewells to our ever faithful senior canine companion, Mavro.  It marked an end of an era of sorts, for we have enjoyed the companionship and oftentimes naughty antics of dogs for the past twenty or so years.  Our house has taken on a rather quiet emptiness now that both of our dogs are no longer with us. 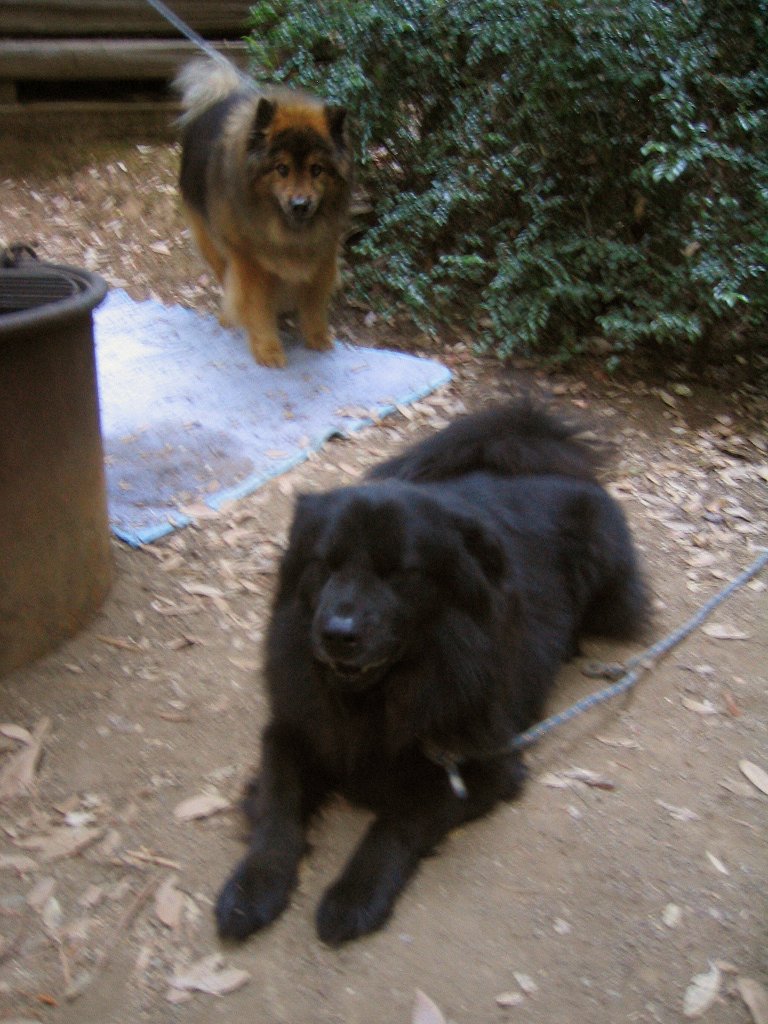 A rather fuzzy photograph, taken in 2007, of Kylo and Mavro (in the foreground) when both dogs were very much in their prime and at their most boisterous
Photo: Chronica Domus


Our beloved Kylo died five years ago.  We considered acquiring another companion for Mavro but by all appearances, he rather liked being the only dog in the household.  That also meant he was the sole attention seeker too, which suited him just fine.  Mavro became a calmer and more stoic dog, if that is at all possible.  He assumed a proud gait as I trotted around the neighborhood daily with him during our walks.  It was as though he was announcing to the world that he had claimed me for his own, ever the faithful guardian I suppose.

Both of our dogs were rescues and although we knew they were not purebred by any stretch of the imagination, Kylo strongly resembled a Eurasier in both temperament and physical appearance, and Mavro a Swedish Lapphund. 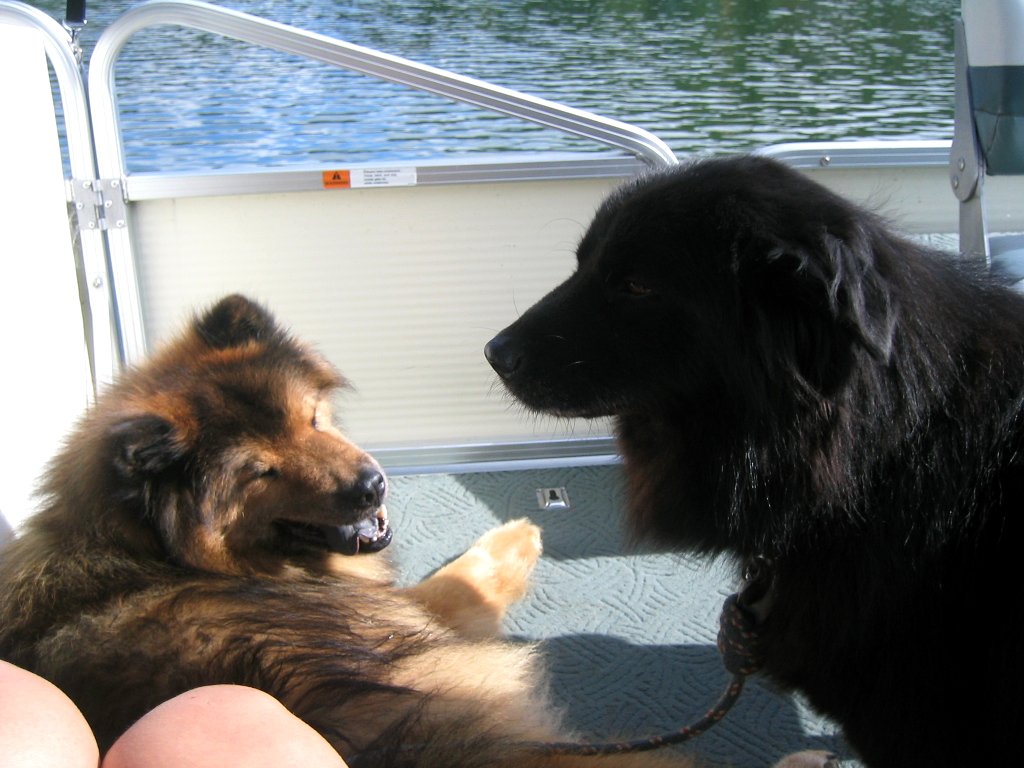 Content to be bobbing about on the water during the summer of 2007
Photo: Chronica Domus

Our sweet boys shared our lives to the fullest and always accompanied us on short excursions to the country where they enjoyed discovering the delights of rambling through mountains and rivers, bobbing about on the water in rented boats, and hiking high and low.

We were fortunate to enjoy the company of each dog for fourteen years, which we've been told is rather a long lifespan for large breed dogs.   Of course, in reality, that's never enough time to enjoy the unconditional love that these animals bring into our lives. 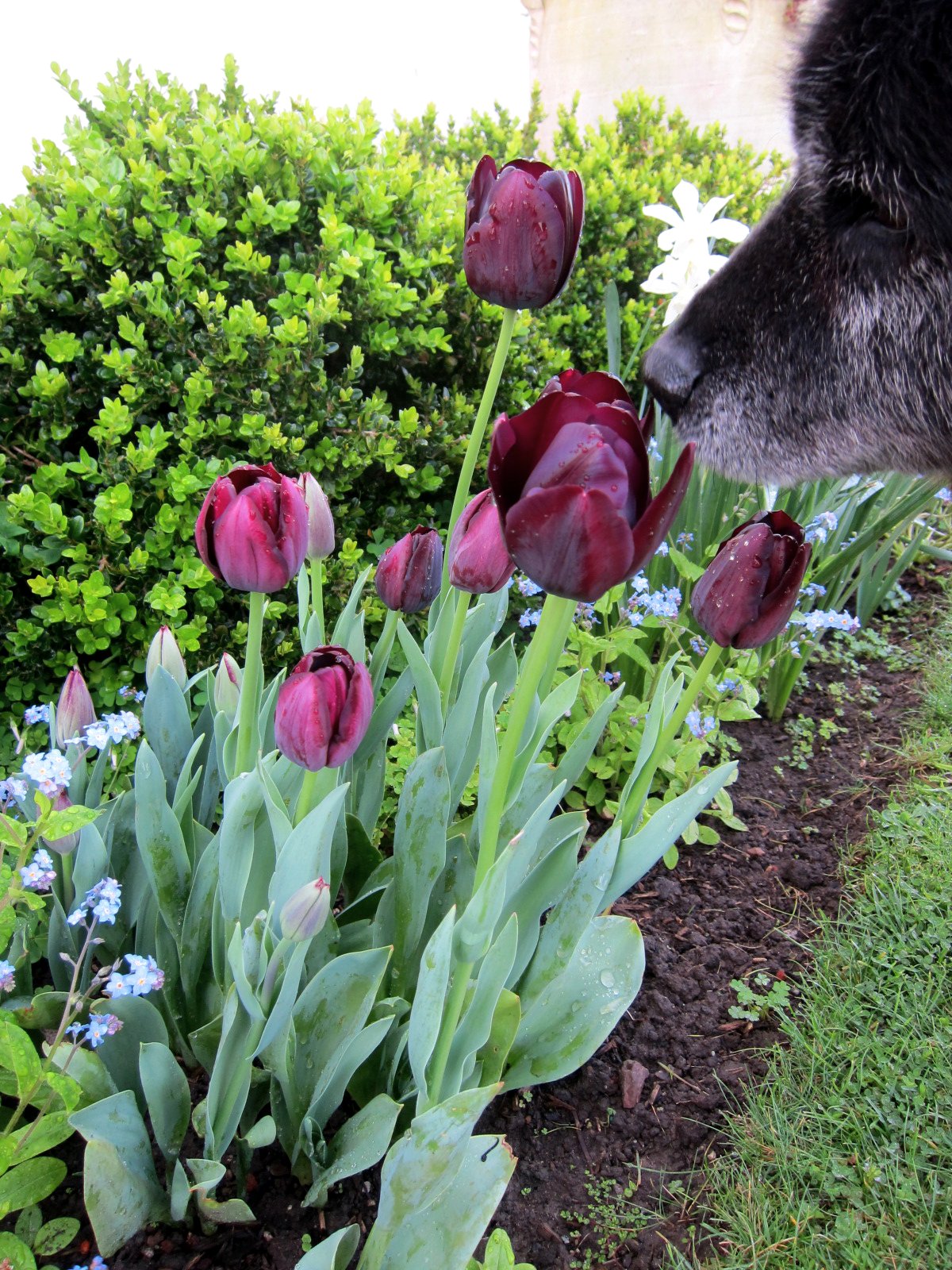 Mavro with his graying snout sniffing at the spring tulips back in April 2015
Photo: Chronica Domus

Mavro had slowed down considerably during the past few years and found it increasingly difficult to maintain a good pace on even the shortest of walks.  We knew it was time to seek help earlier this year and approached our vet for a solution.  Pills and a new diet were prescribed and, for a while, we saw a marked improvement in Mavro's comfort level.  Then, two weeks ago, even leaving the house became problematic.  The hobbling had worsened and Mavro was deteriorating at an alarming rate. When he could no longer get up on his own, we knew it was time.

I will forever remember both of our good-natured loyal boys with love and affection, and will never forget their gift of unconditional love towards their human family.

Farewell my pretty boys and may you both rest in peace. 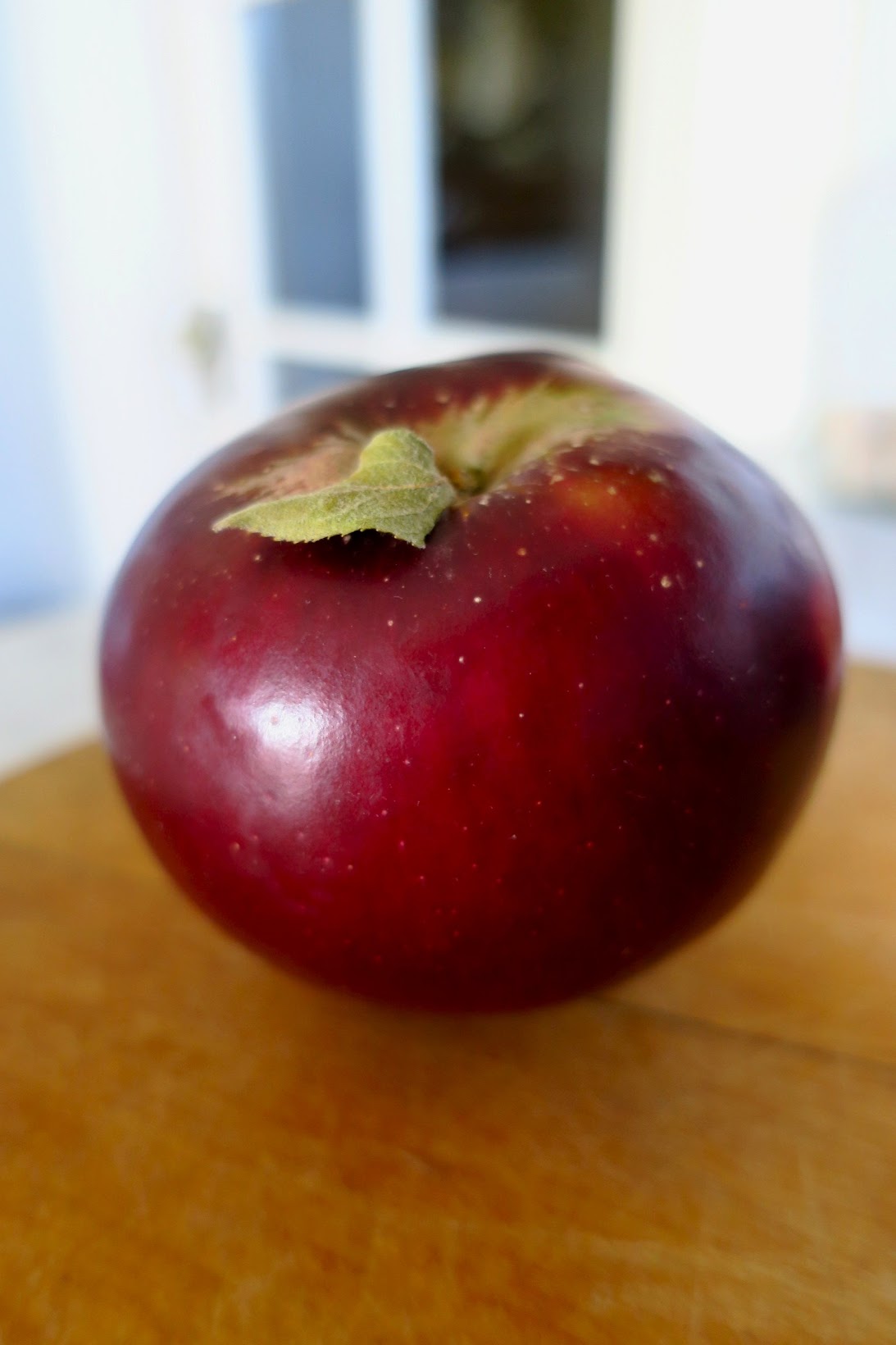 Could this be the apple that tempted Snow White?
Photo: Chronica Domus

During Saturday morning's foray to the farmers' market, I was stopped in my tracks by the sight of an apple.  The apple in question was not just any old apple, mind you.  It boasted a hue so deep and dark it could almost pass for a plum.  I had an overwhelming urge to bite into one right there and then. The two women standing beside me filling their brown paper bags with these bewitching fruits exclaimed to each other "They look just like Snow White's apple".  I had to agree with them. 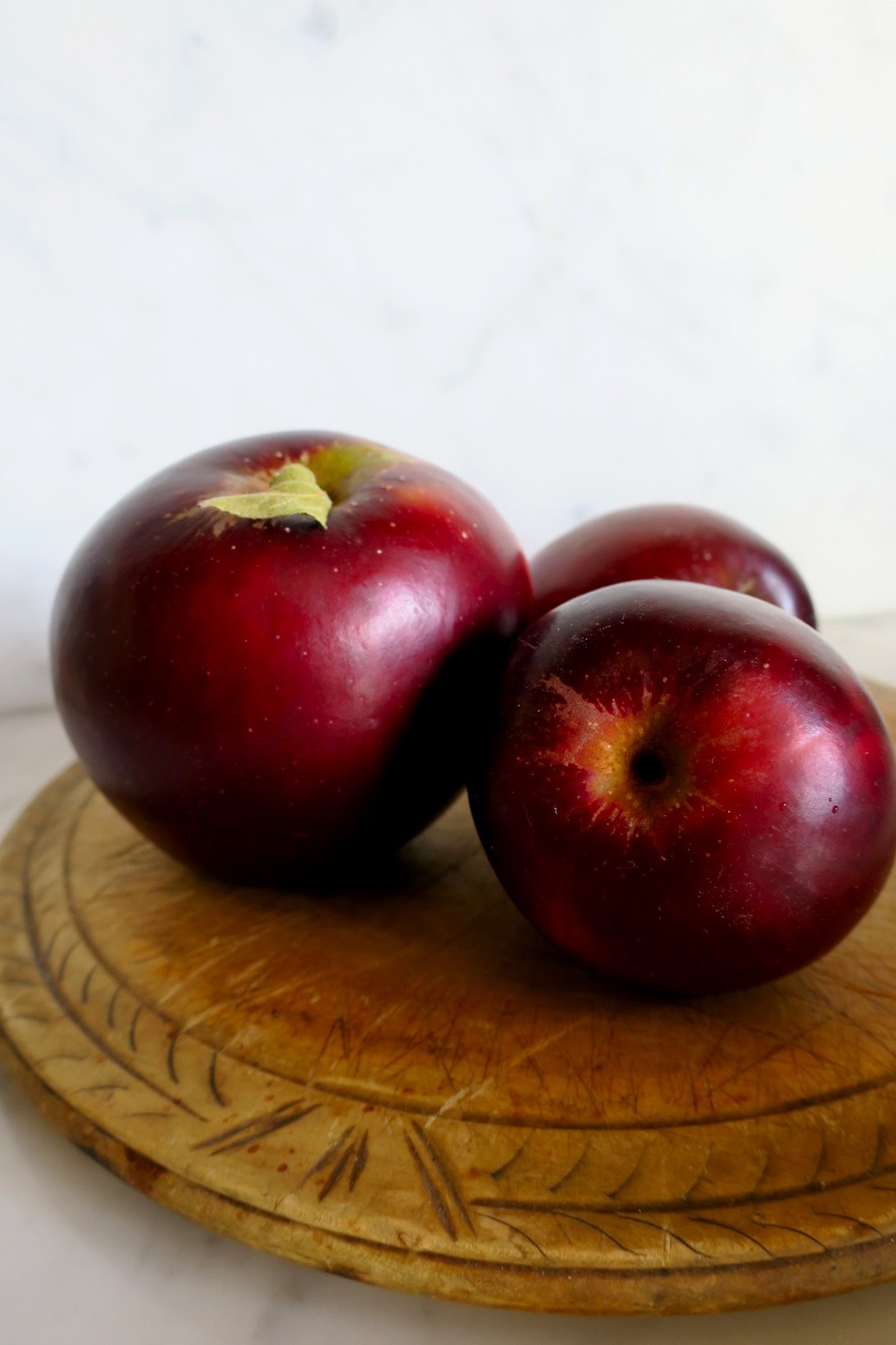 
In chatting to the farmer, I discovered that this early-nineteenth century cultivar is known as an Arkansas Black apple and provides quite a challenge to grow.  In fact, he told me it was a "real pain" which might explain the scarcity of this particular variety in our area.  Apparently, his finicky thirty-five year old tree is not usually a heavy producer but this year's optimal weather conditions yielded an unusually large crop.  How lucky for us, his farmers' market patrons. 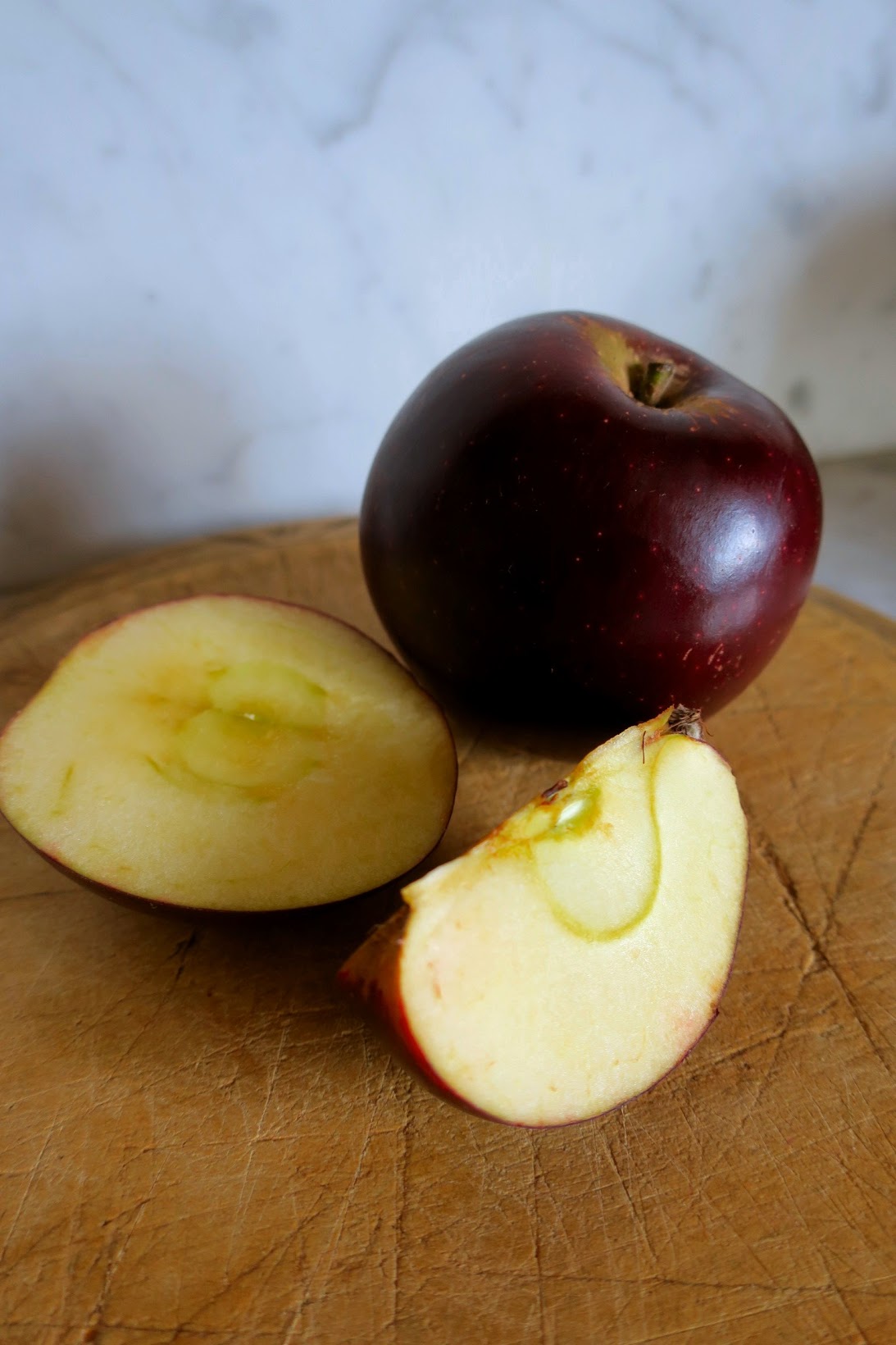 Have you ever seen such a dark-hued apple?
Photo: Chronica Domus

Upon my return home, I could not wait to cut into the glossy dark skin of this beautiful heirloom and photograph it for your pleasure.  Biting into the green tinged creamy-colored flesh proved to be a very good thing indeed.  I can tell you the flavor was nothing short of delicious. With just the right balance of  sweet and sour, and as crunchy and juicy as one would expect from a perfectly ripened autumn apple, Arkansas Black proved an excellent choice among the sea of apples available for sale at the market.  I just know my daughter will agree when she finds one tucked into her lunch box today.

Have you had the pleasure of sampling one of these black beauties, or do you have a favorite "go to" eating apple you look forward to snacking upon at this time of year?

A Mourning Memento for All Souls' Day 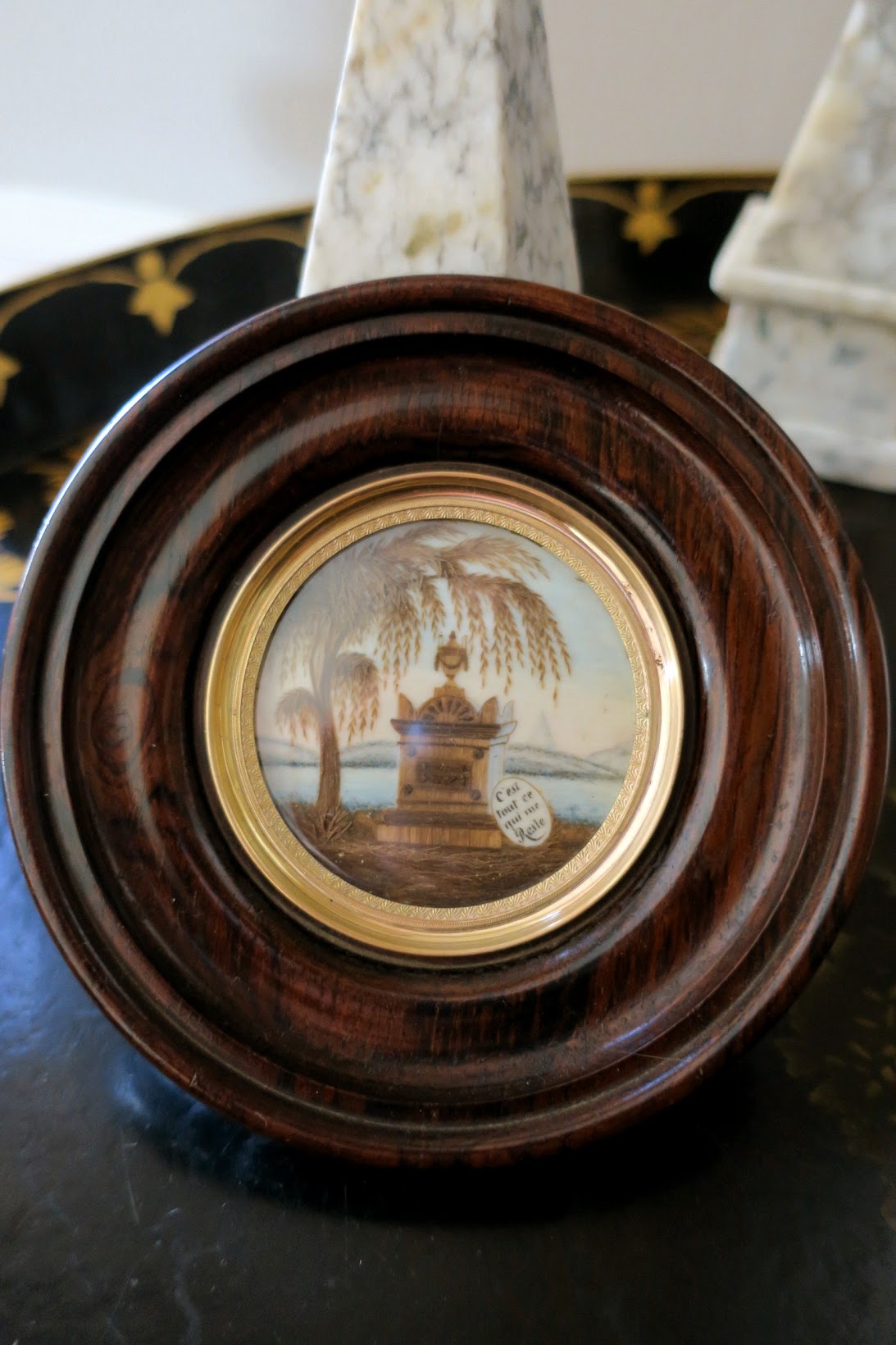 
Today is All Souls' Day, a day to remember those that have gone before us.  The occasion also provides me with an excuse opportunity to share another piece of mourning art from my collection.

I've already written other posts on the curious and sentimental art of mourning, found here, here, and here, so I won't go into too much detail on the subject.  I will allow this handsome memento to speak for itself. 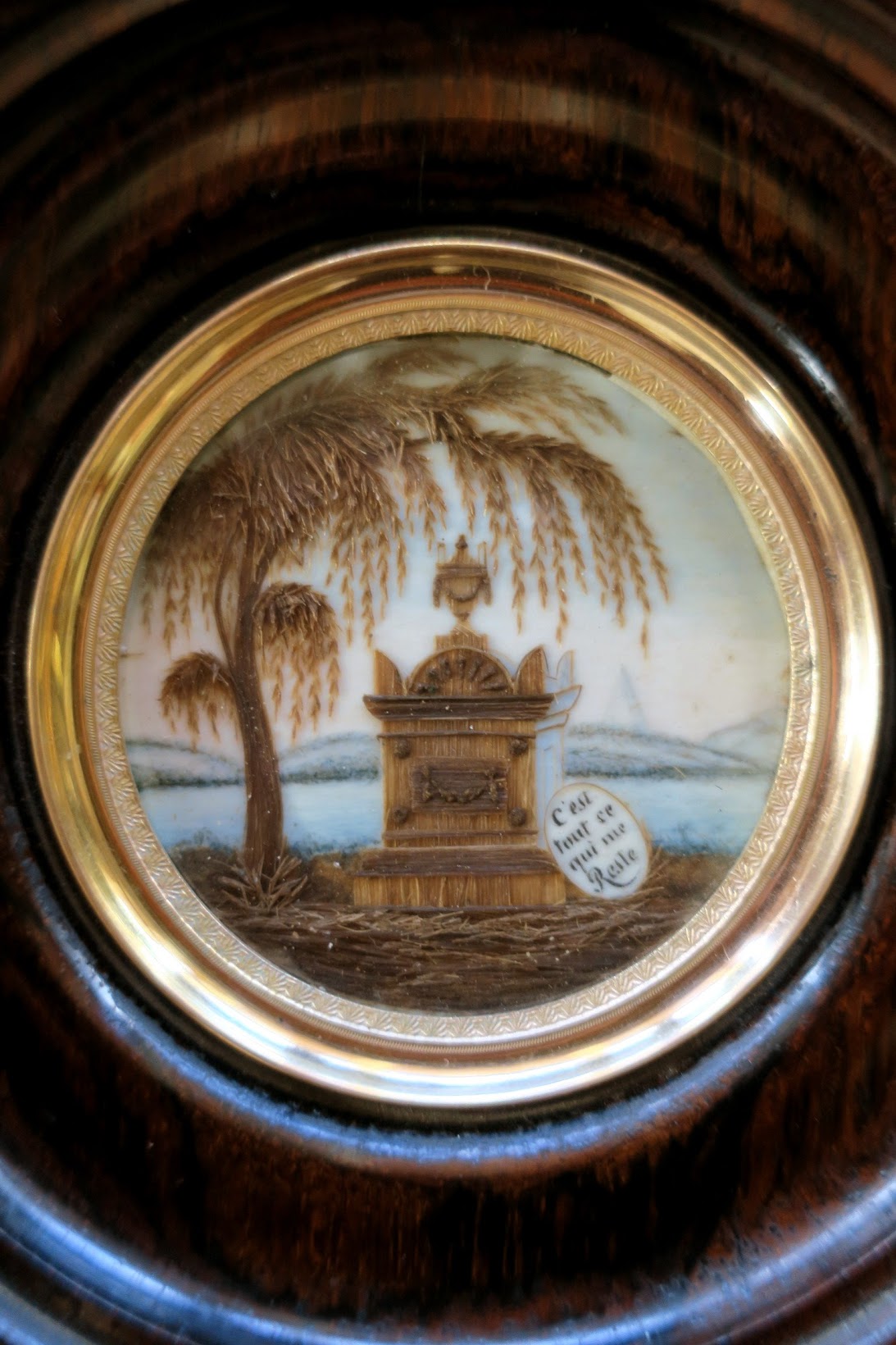 This diminutive treasure is a mere two and a half inches in diameter, or five inches with its frame.  Its imagery is composed of human hair which has been masterfully manipulated and arranged upon a thin slice if ivory backing.  The background has been painted to show a river and hilly landscape. A pyramid or perhaps the top of an obelisk is visible beyond the hills.  Typical symbols of mourning are represented by the weeping willow tree, the tomb upon a plinth, and a lone graceful urn.  The poignant inscription on the tablet, to the right of the tomb, reads "C'est tout ce qui me reste", which roughly translates to "all that remains of me".  Nothing else need be said to convey the affections of the loved one who commissioned this striking and dignified piece.

This is another example which I acquired in Holland though it was likely created in France.  The mourning art is housed under glass in its original mahogany frame which has developed a warm patina over the ensuing years.  I believe the memento dates to around 1830.

I expect many of you might well find this form of memorializing our dearly departed more than a little macabre, but I find the sentimentality behind the incorporated symbolism of such artworks not only pleasing, but rather fascinating.

If you'd enjoy learning more about this most personal form of artwork, I highly recommend you visit the Art of Mourning web site which is deftly curated by Hayden Peters, a fellow collector of mourning art and sentimental jewelry.

Posted by Chronica Domus at 6:47 AM 9 comments: