A Rather Peculiar Carrot Crop

Sometime during the month of May, my daughter Patience and I planted carrots.  We did not plant many, so we thought, just a starter pack of six seedlings purchased from a seller of organic plants at the San Francisco Farmers' Market.  The variety, we were told, was a type of mini carrot whose name has since escaped my failing brain.

Yesterday, I noticed the little orange carrot tops had poked out from beneath the damp earth. 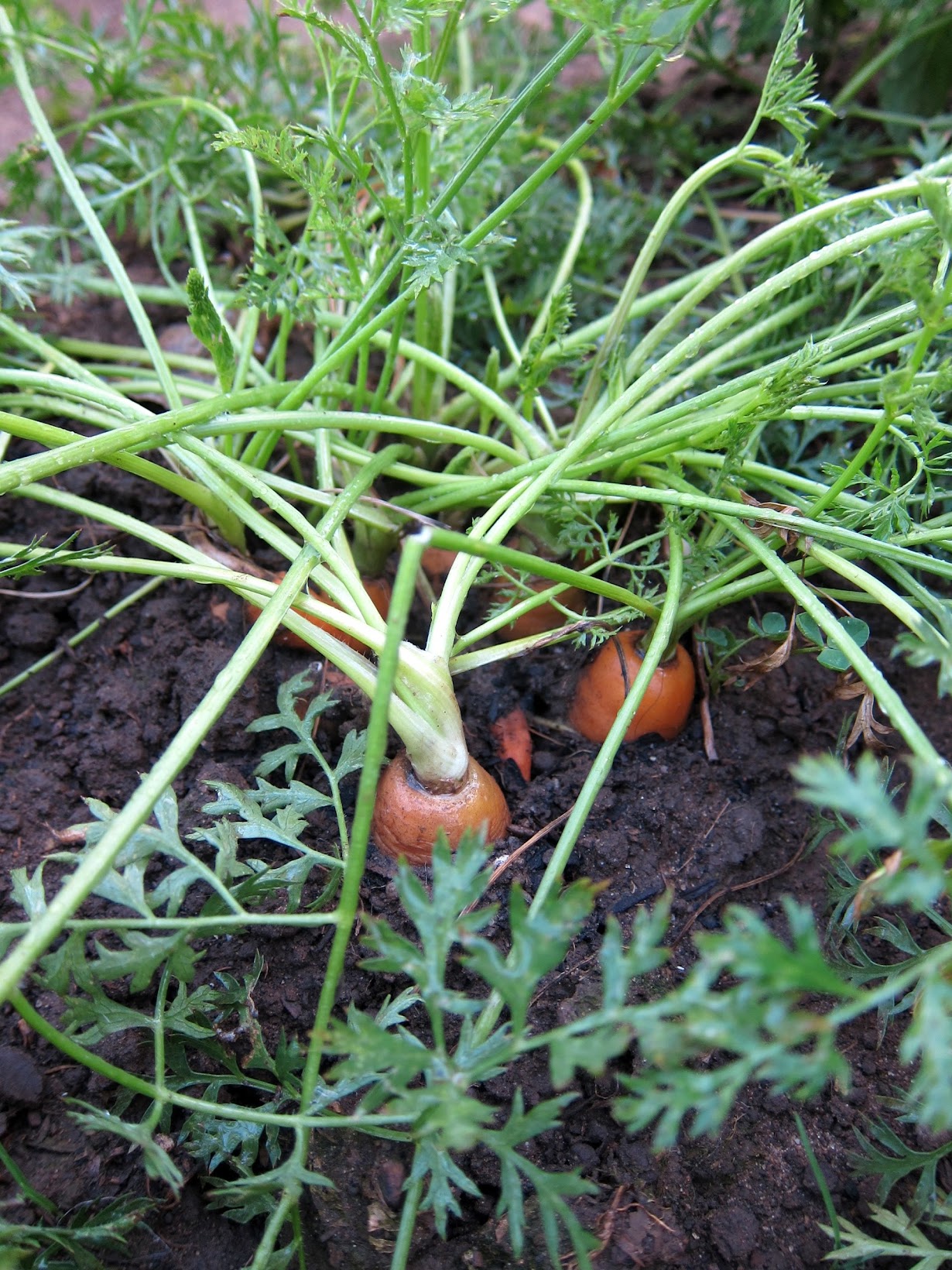 
Aha, I thought, it must be time to dig up our crop.  But wait... just... a... minute!  Exactly how many carrot tops was I staring at?  Had they seemingly multiplied during their growth spurt?  We had, after all, only planted six little starter plants. 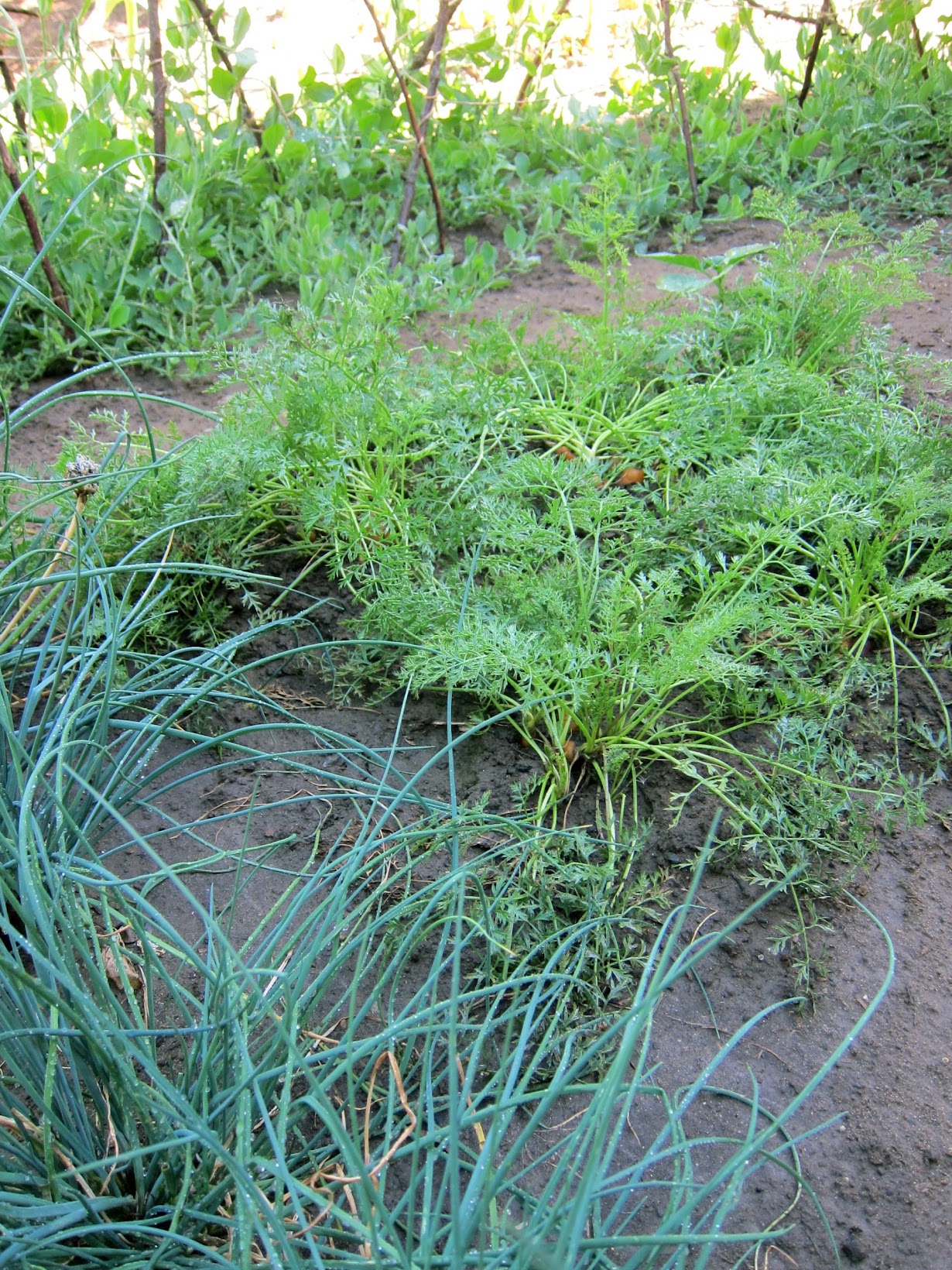 Our six pack of carrots in among the chives and sweet pea stakes
Photo: Chronica Domus


Curious to reveal what might be hiding beneath, Patience handed me the trowel.  When the soil had loosened, I gently tugged at the carrot tops and lo and behold out came ... 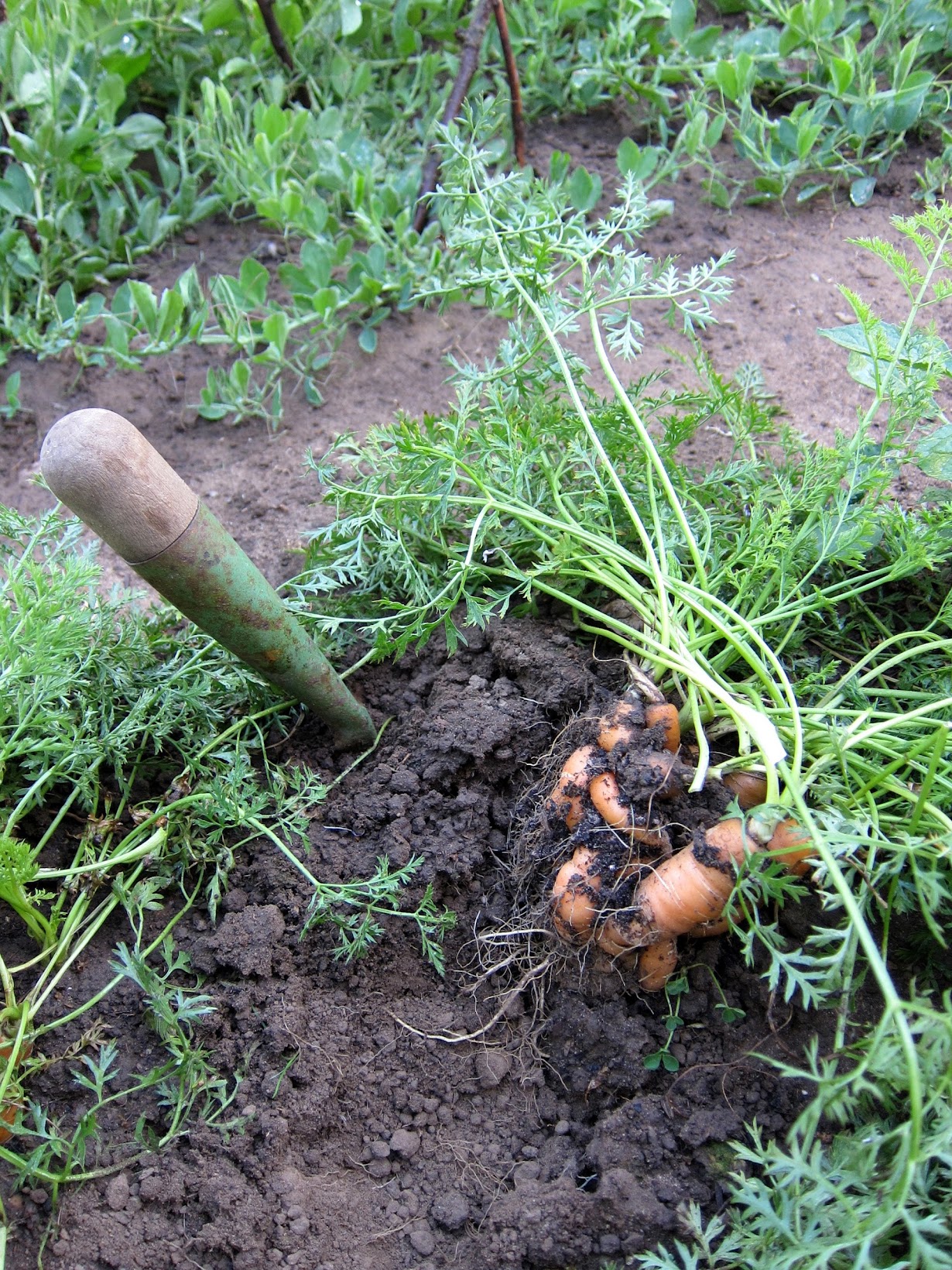 Heave-ho, and out you come!
Photo: Chronica Domus 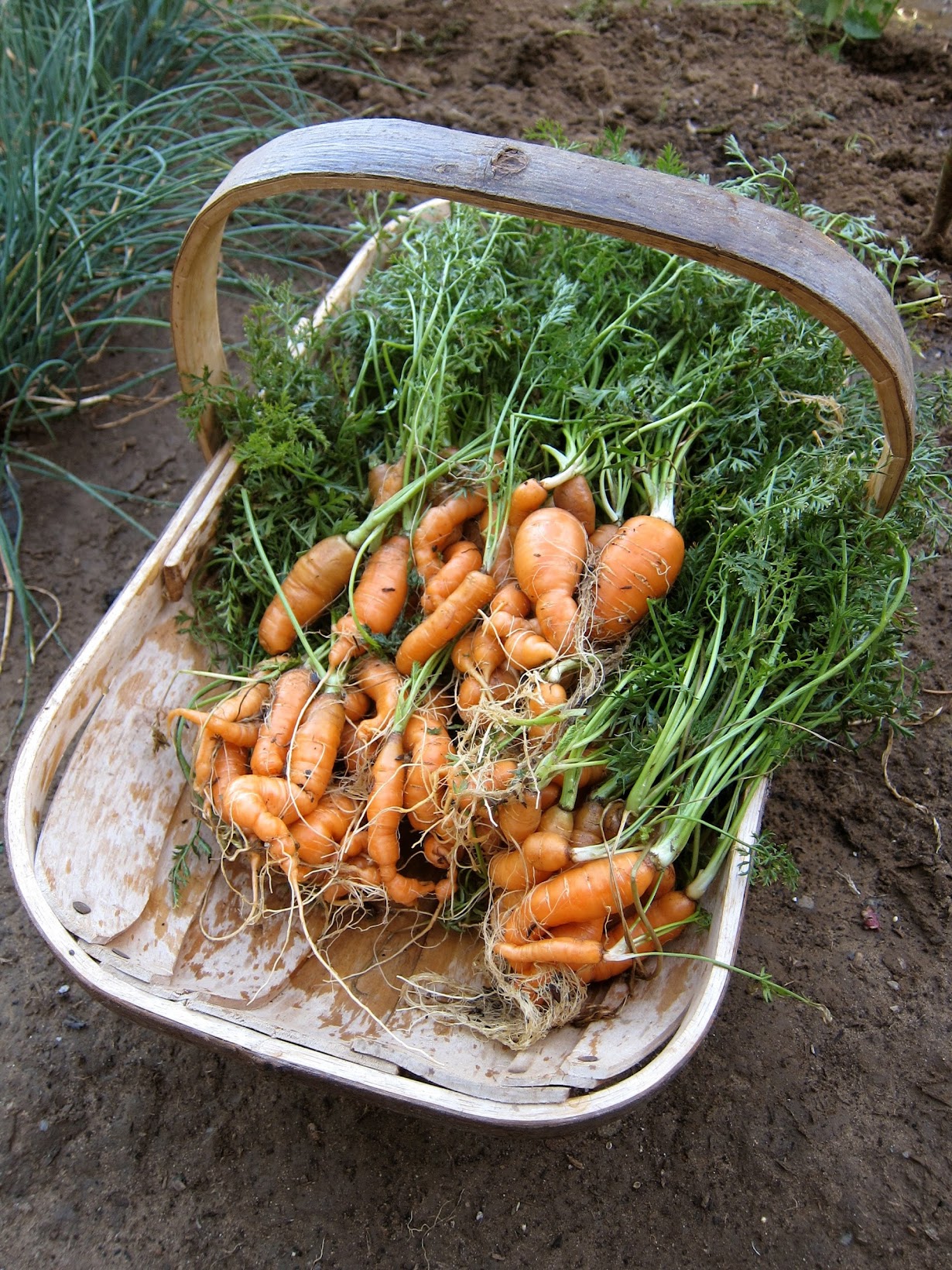 
Patience and I were flabbergasted at the sight of our peculiar carrot crop.  How on earth had six little seedlings turned into so many carrots, and how had they become so contorted as to look, well.... deformed?  Or, as my daughter succinctly put it "They look like broken phalanges".  Hmmm... quite! 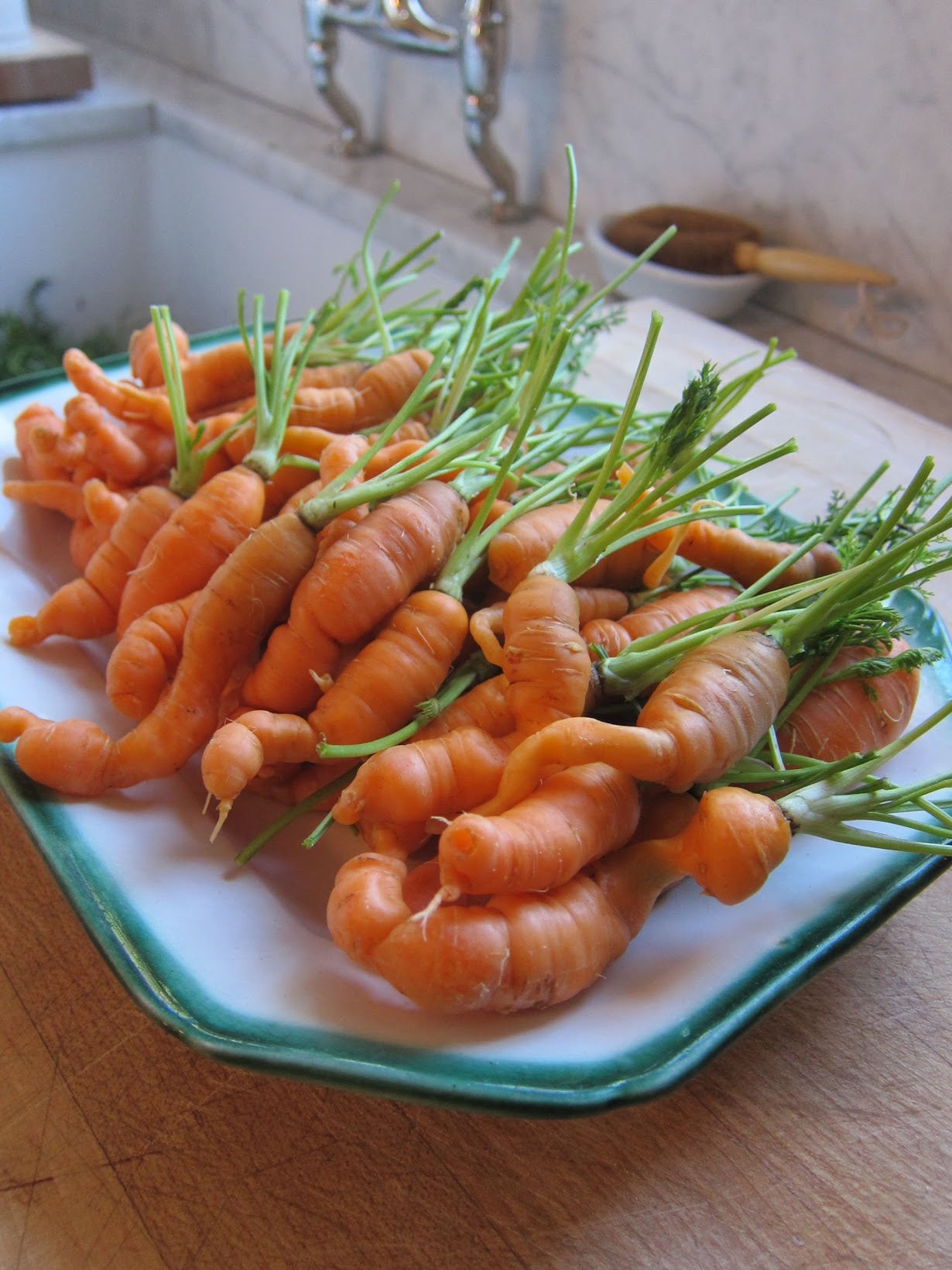 
Sharing a jolly good chuckle over our horticultural endeavors, we both agreed that although our crop would not be winning any blue ribbons for their looks, they might just eek one out for their sublime taste. Crisp and sweet, these were certainly winners in our book.

As much as I enjoy the panoply of blooms that are available for sale at the San Francisco Flower Market, there's nothing quite like the joy of growing one's own.

In this particular instance, it was never my intention to grow these glorious tennis ball-sized globes at all but, as the old adage goes, "the best laid plans of mice and men often go awry". 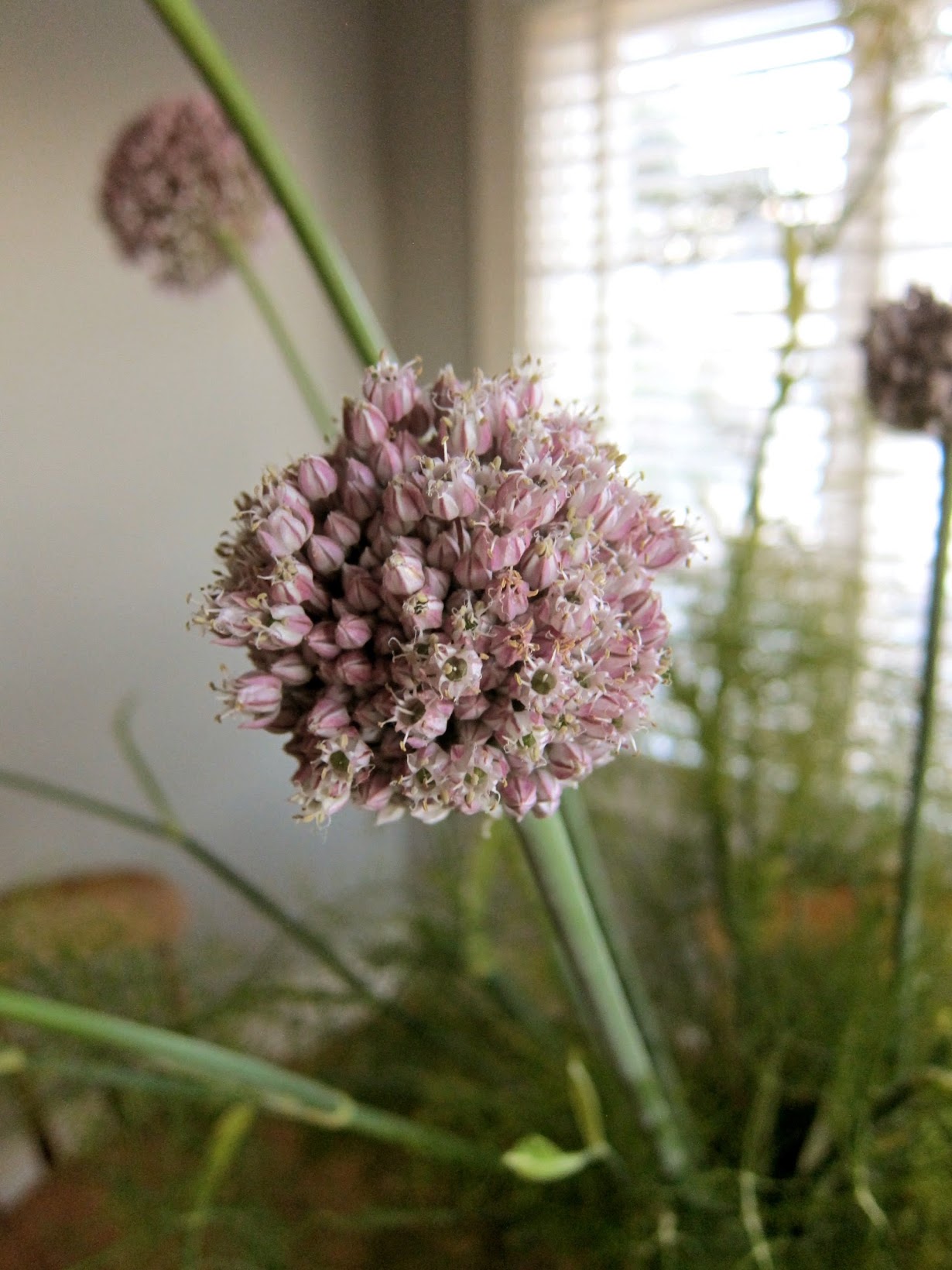 You might remember back in February reading about the leeks I planted which stubbornly refused to grow for what seemed like an eternity.  There were two dozen of them. 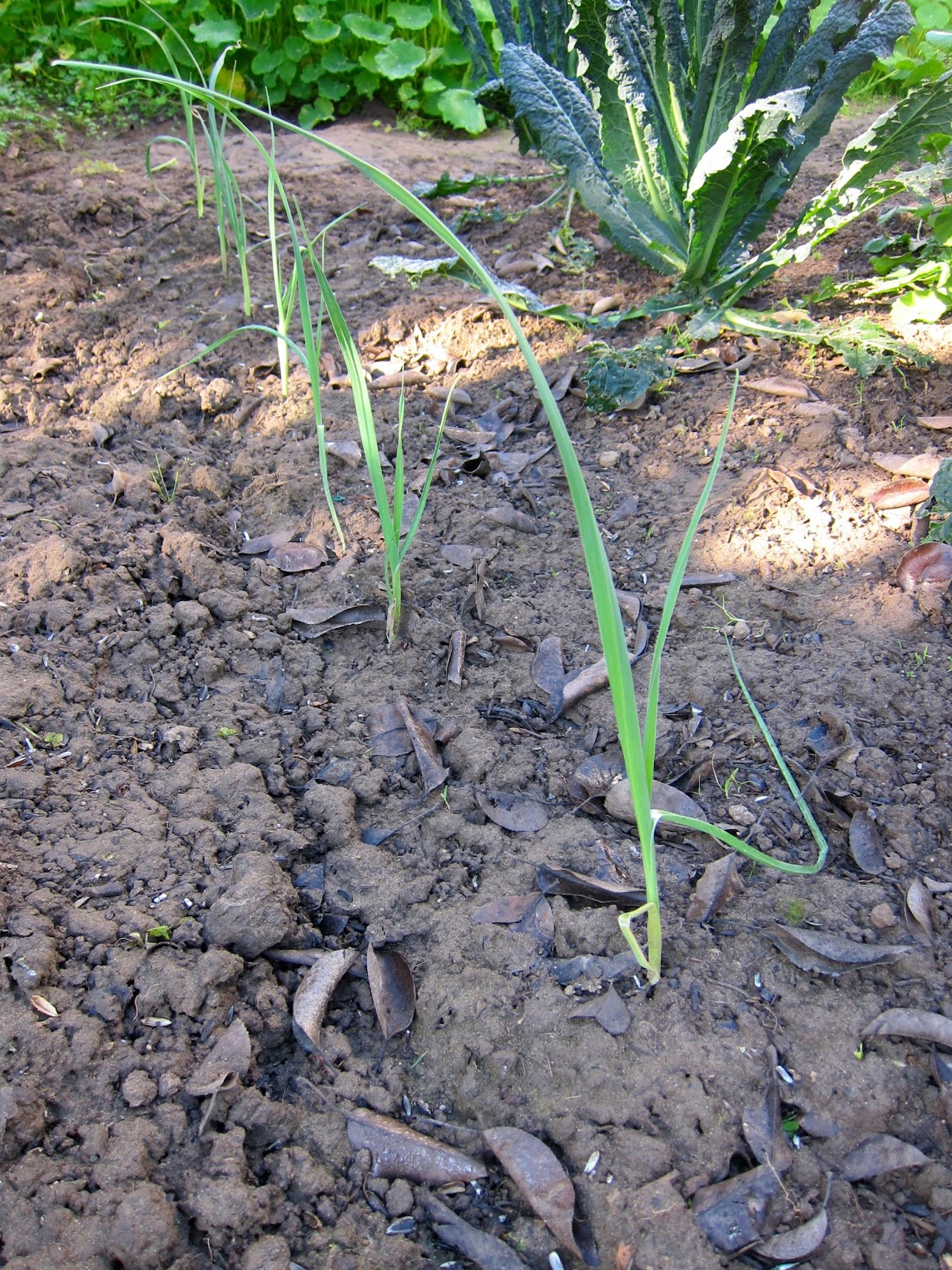 Blink, and you might just miss a row of wimpy leeks in the early spring vegetable garden
Photo: Chronica Domus

Well, those feeble little things finally grew up and provided our kitchen with their flavorful goodness for weeks on end.  However, too much of a good thing is... well, you get the picture.

Before I knew it, the remainder of the crop began to climb skyward.  Seemingly overnight, the plants had metamorphosed into beguiling five foot tall tapers crowned by purple globes.  I was delighted at their transformation, as were the local honey bees which found them of interest. 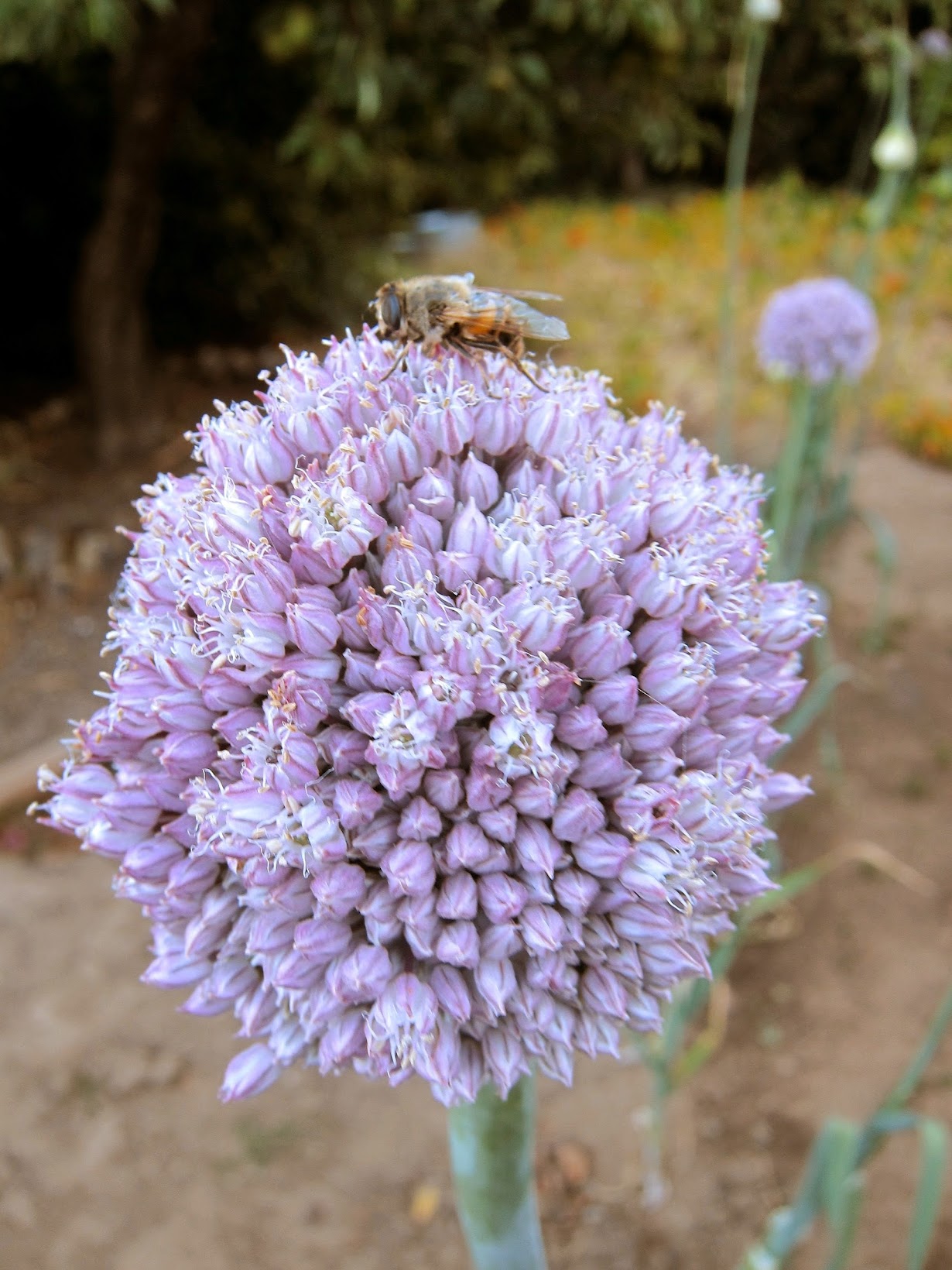 Yesterday, I took my secateurs to hand and snipped half a dozen of the blooms to bring indoors.  I added them to foraged wild fennel, which grows in abundance in the Bay Area, much like the cow parsley I recall in England which lined every countryside lane.  The intoxicating licorice-like aroma of the feathery fennel fronds is such an unexpected olfactory treat. 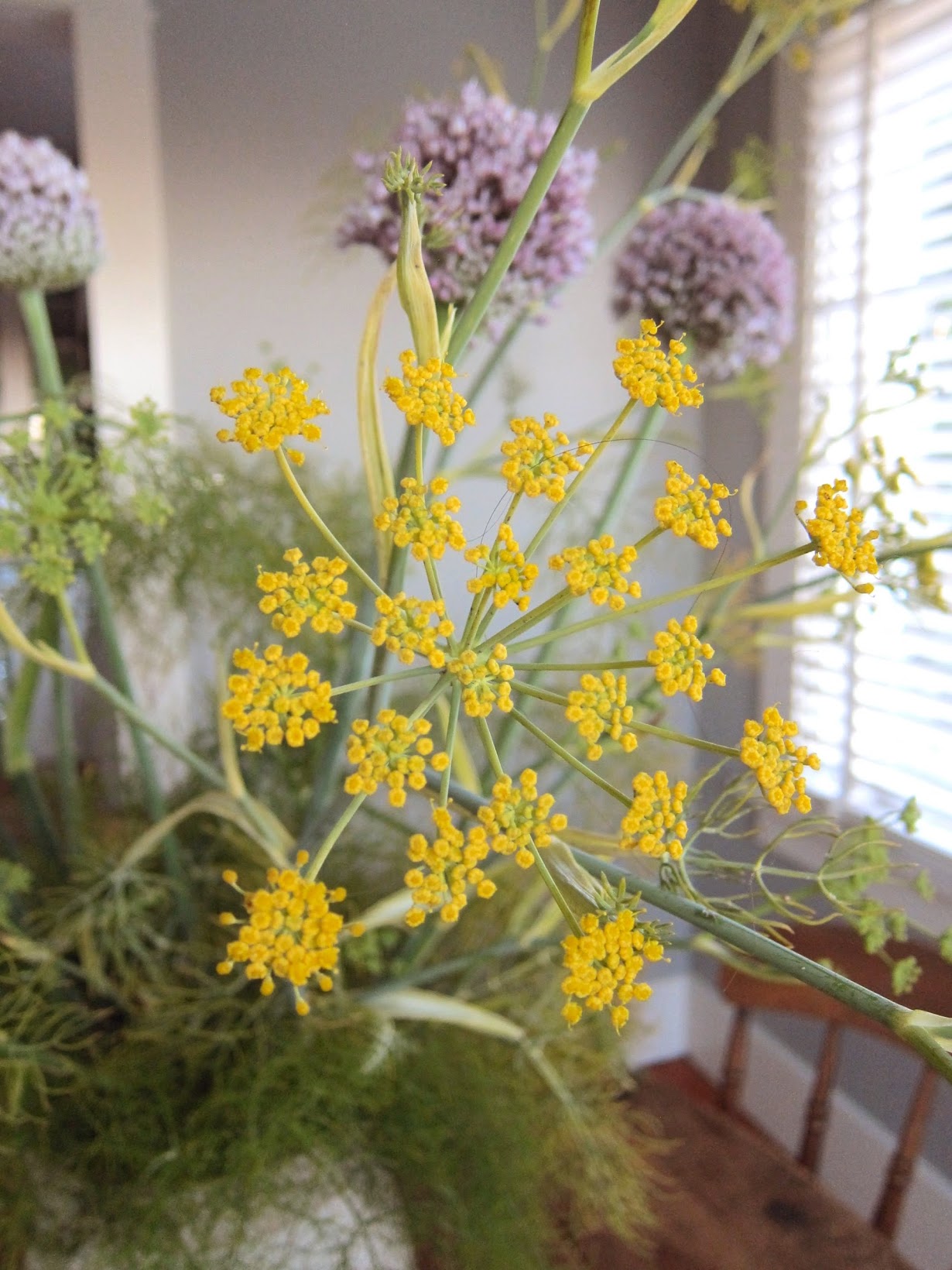 It took me a matter of minutes to assemble the modest arrangement you see below, which sits on our kitchen table.  The best part of this little story is that I managed to use my otherwise inedible leeks. Waste not, want not, I suppose. 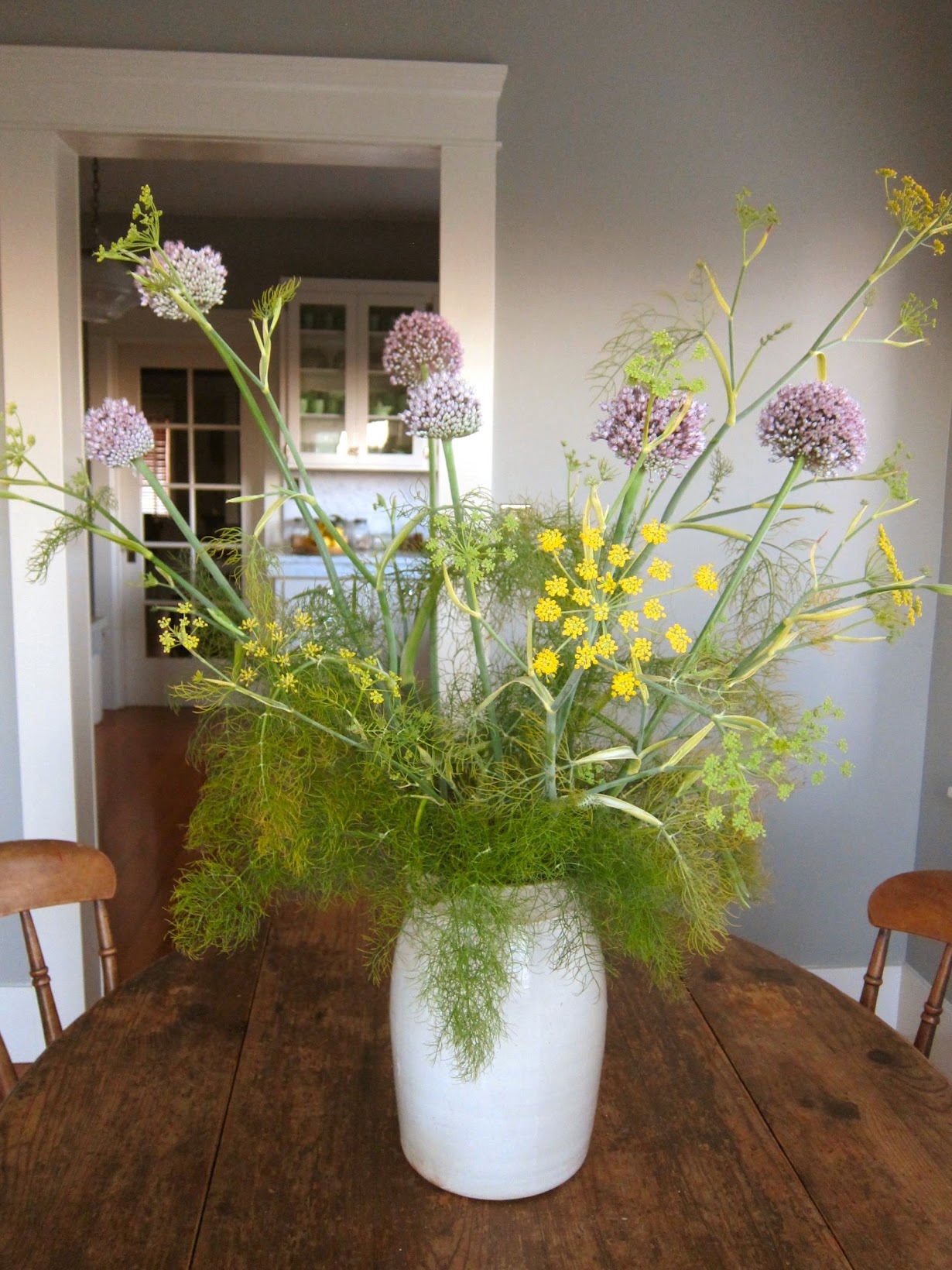 Is there something indigenous to your region which may occasionally find its way into your home, in the manner of our wild fennel?
Posted by Chronica Domus at 4:50 PM 18 comments:

I recently learned that the one dollar bill, which prominently features a painting of George Washington by Gilbert Stuart, was first printed in 1963. It is the oldest design of any US currency in circulation today.  Mr. Stuart wisely held onto his original unfinished portrait of Washington, known as The Athenaeum, so that he could make subsequent copies of it to sell on both sides of the Atlantic. He painted seventy-five in total.  Not surprisingly, it became his most celebrated work. 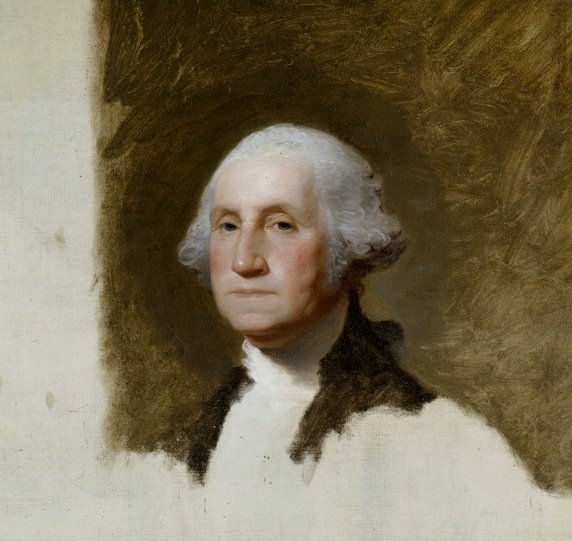 
Rembrandt Peale, another prolific and successful contemporary of Gilbert's, established his own career by painting George Washington seventy-nine times; a career-defining milestone if ever there was one.  The artist helped cement George Washington as an iconic symbol of the young nation. Interestingly, Peale had been greatly inspired by Gilbert Stuart's 1795 dollar portrait of Washington. 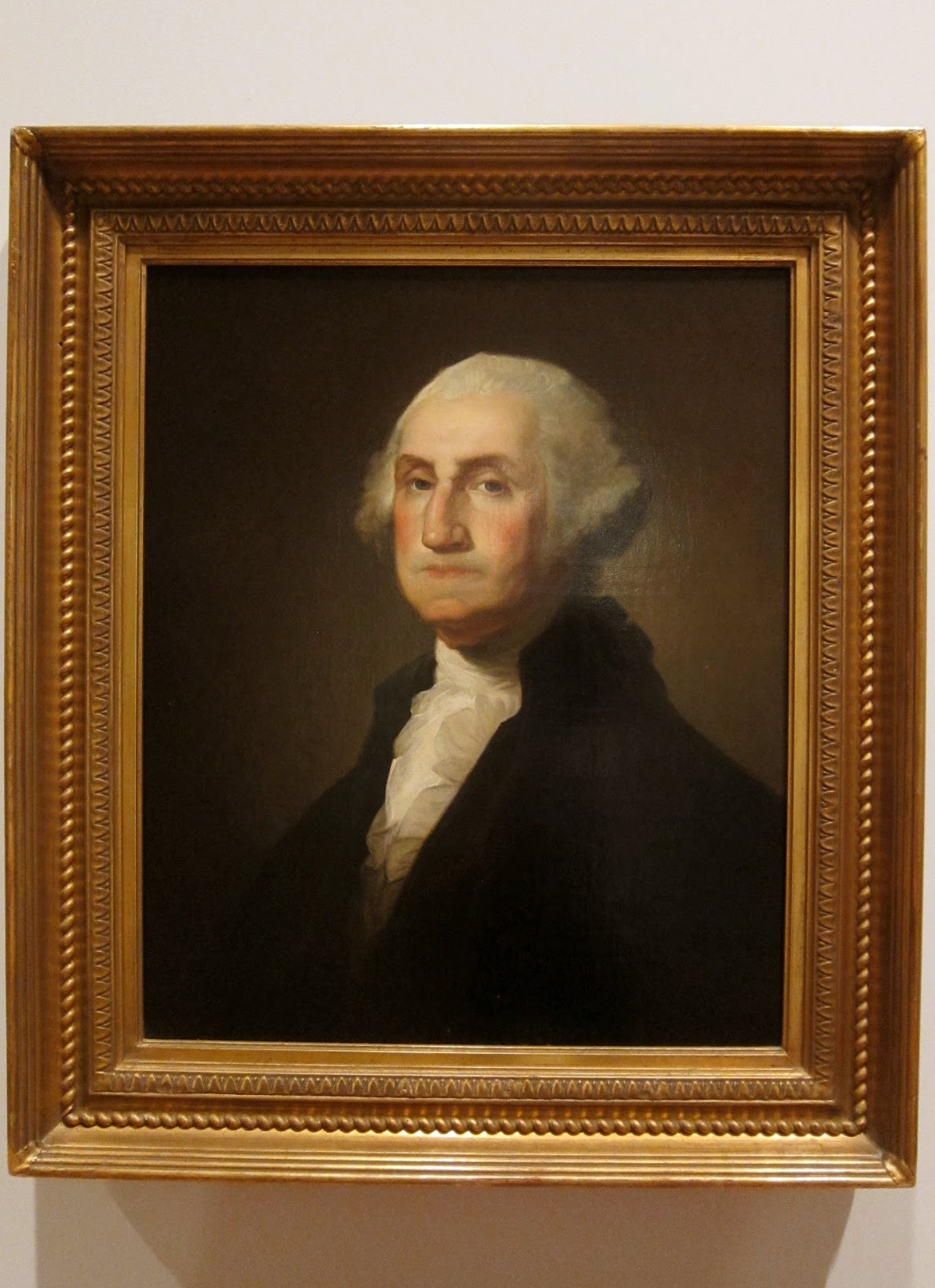 
Over the years, many more artists have been roused into action by America's first president. Mr. Ray Beldner, a San Francisco-based sculptor and artist, is one of them. Below is his depiction of George Washington, which itself was inspired by Rembrandt Peale's Washington portrait as seen in the preceding photograph. 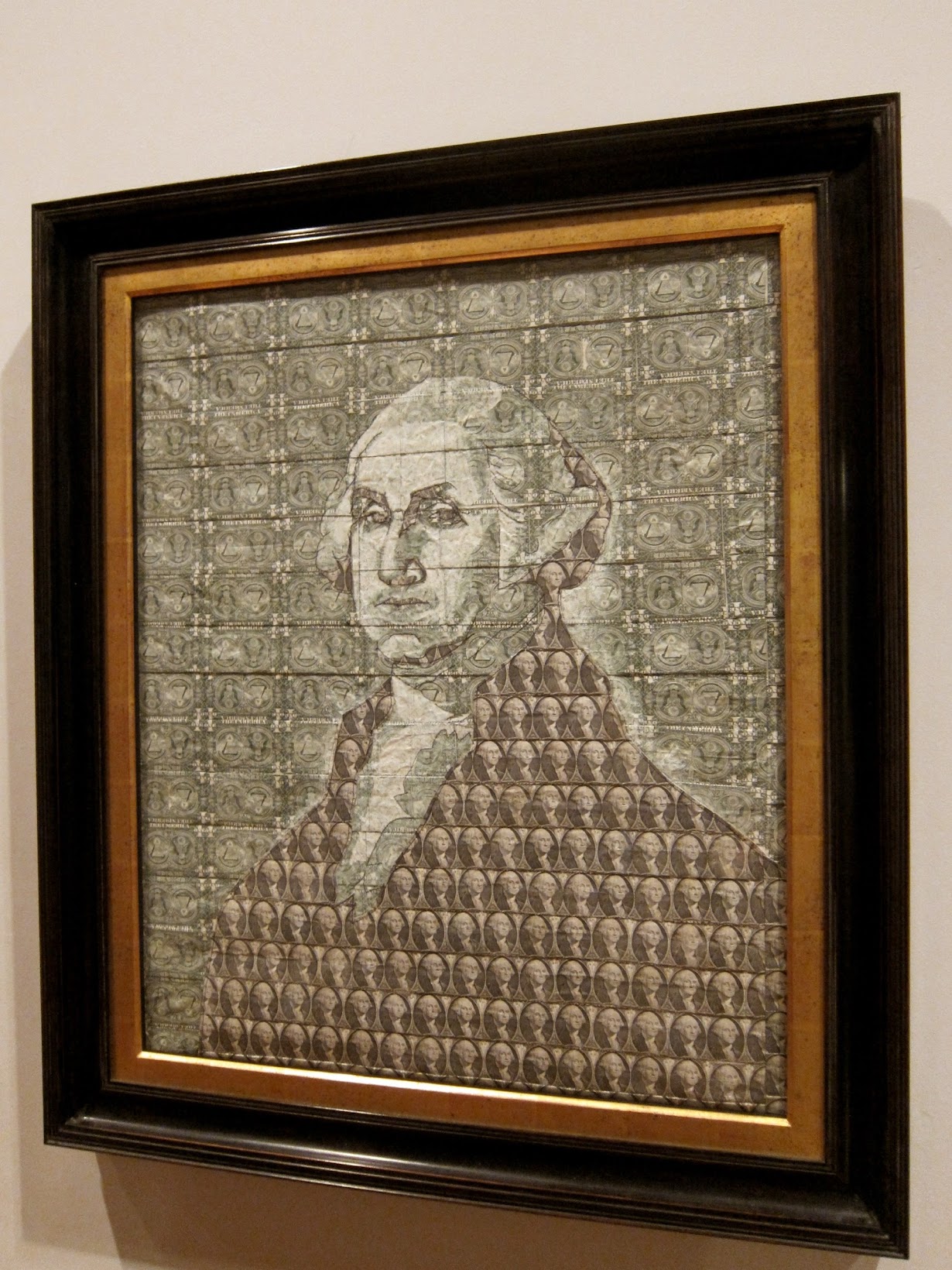 
The extraordinary thing about this particular depiction of George Washington can be found in the details.  If you look carefully, you will notice the portrait is comprised entirely of one dollar bills, the same bills that feature Gilbert Stuart's Washington portrait. Mr. Beldner has painstakingly sewn them together in a most novel arrangement.  By some unfathomable trick of the eye, they form a perfect likeness of The Sage of Mount Vernon. 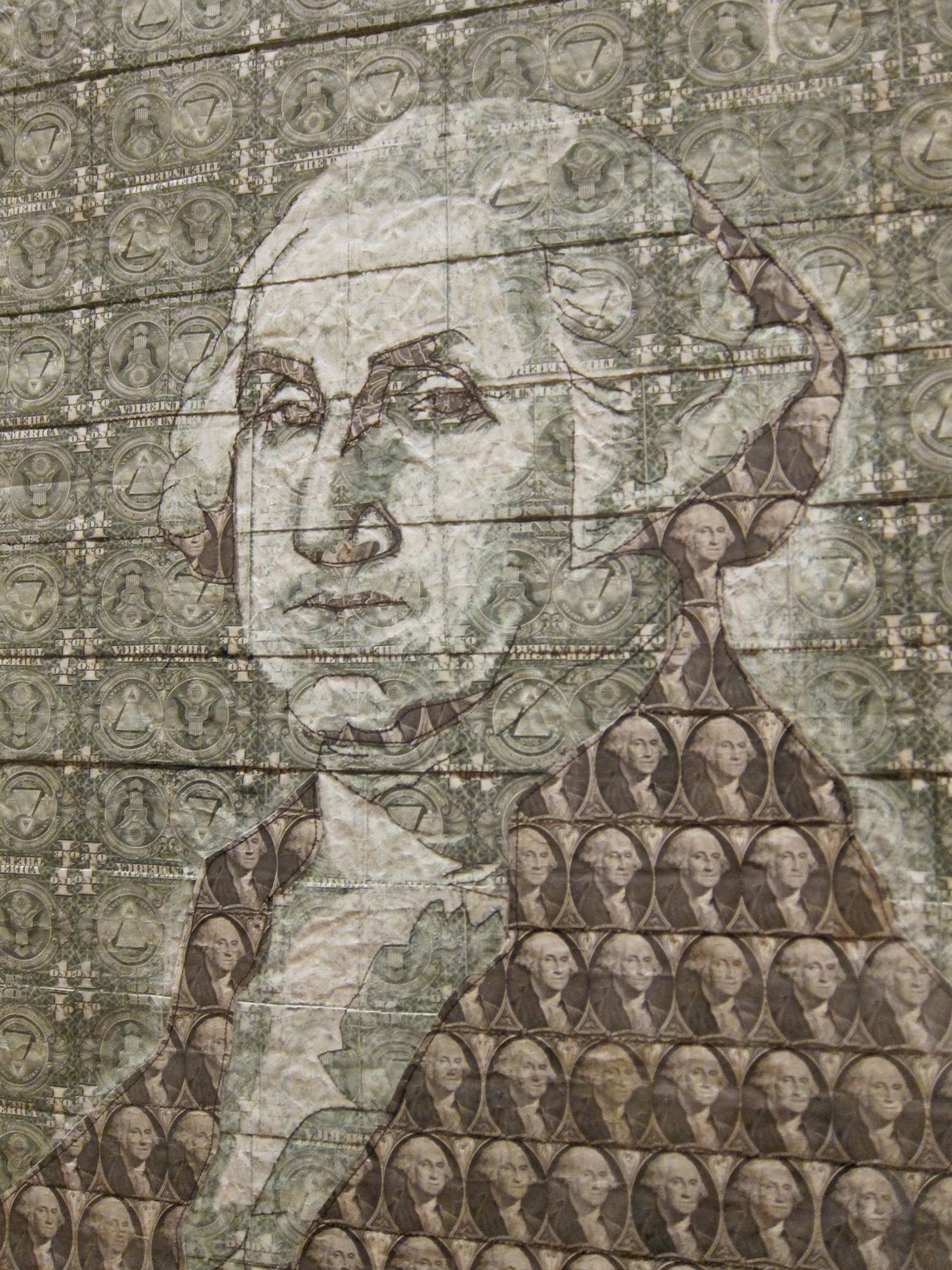 
The first President of The United States has not only inspired countless men on the battlefield and beyond, but has also managed to inspire those of a creative bent. Stuart, Peale, and Beldner, three artists, over two centuries, forever united by their greatest inspiration, George Washington.