Part I of III: Birthday Wishes To My Father & How He Fell Into His Profession

Tomorrow is my father's birthday and as I've been thinking about him a lot lately, I decided to write a short series of posts all about his work.  Happy Birthday Daddy! 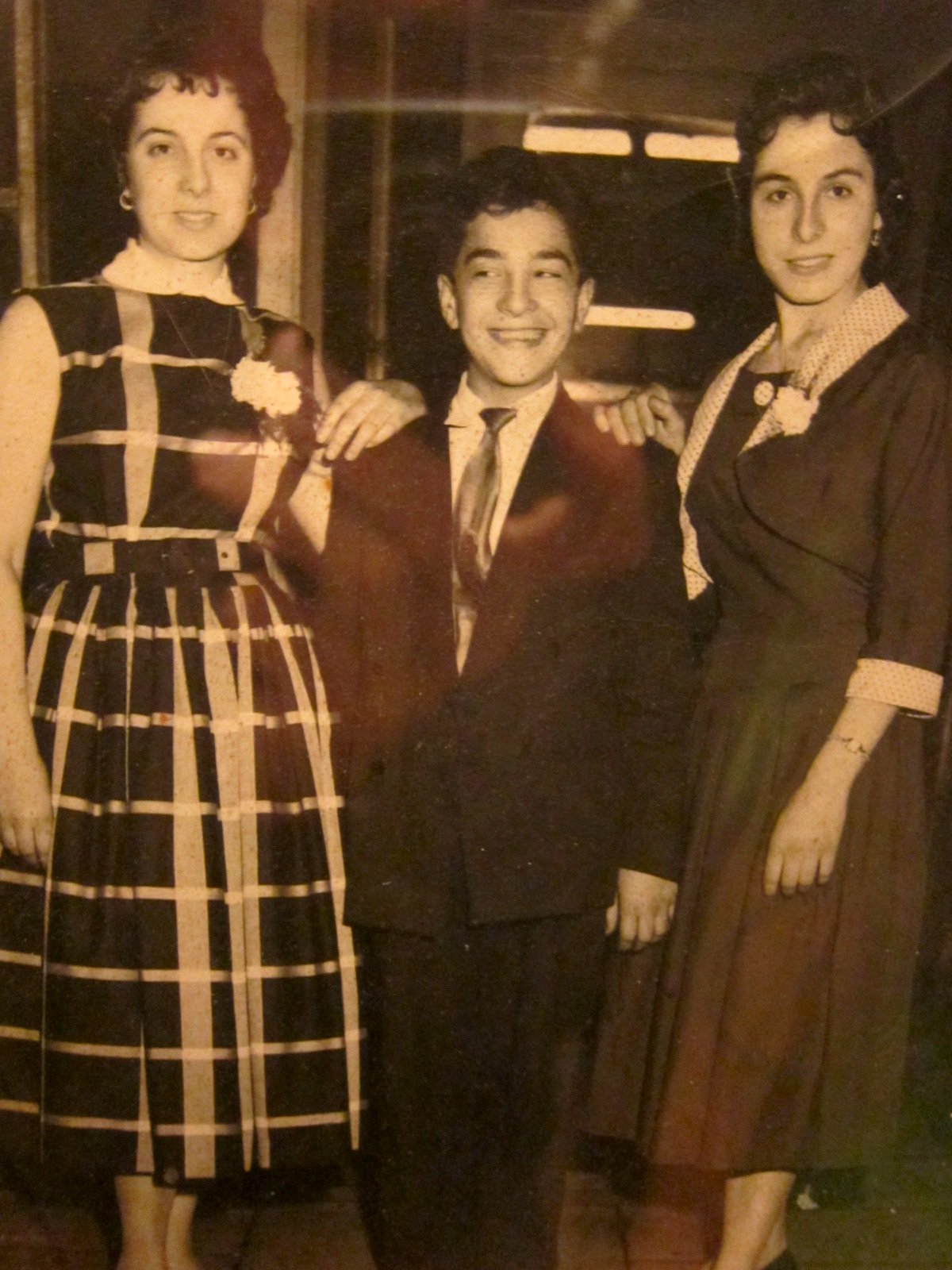 My beaming father at the age of sixteen wearing the first suit he ever made, a double-breasted example, photographed with his two adoring sisters
Photo: Chronica Domus


You've never met my father, but if you've ever seen Rex Harrison in the film My Fair Lady, or have admired or been equally amused at some of Elton John's unique and zany stage suits, or perhaps remember the cover of The Beatles album Abbey Road, you will likely have seen my father's handiwork. Until his retirement a few years ago, my father was a Savile Row tailor.

During his lengthy career, which began as an apprentice at the tender age of sixteen, when he was a mere rakish lad, he has dressed some of the most famous figures in the world. People from all walks of life that have admired and desired the fine cut of a bespoke suit have crossed paths with my father. His jackets have been worn by figures from the world of stage and screen, members of the royal families of Europe and the middle-east, politicians, singers of popular music and classical opera, captains of industry, and untold numbers of ladies and gentlemen whose taste in sartorial elegance includes a finely crafted suit.

Becoming a tailor was something that was quite unplanned for my father, and he was the only member of his immediate family to have pursued a creative career. I believe this is because he is an artist at his very core, someone for whom the smallest and most subtle detail can never escape his critical eye. He has nearly a sixth sense as to how cloth might be manipulated to drape and caress in just the right places, highlighting or even disguising the best or worst features of a person's frame. He can appreciate the construction of a tiny horn button, or the way a pair of scissor blades have been honed to cut just so, and whose weight balances perfectly in the hand. When I was a little girl, I remember him constantly doodling on the silver paper linings found within his packets of Rothmans cigarettes, often little crude designs of lapel styles or theatrical renditions of jackets and blazers.

I recall my father telling the story of how he was so all consumingly bored upon being given the tedious duty of gluing endless fabric samples into books, his sole responsibility at his first job. The operation was based in a multi-storey building somewhere in London, and he found it most amusing to pad out his day by riding the building's only elevator, up and down ad nauseum. Well, his superior soon clocked onto his game when other employees began complaining that the elevator was always jammed and out-of-service. I don't think that job lasted for too much longer.

Next, he managed to be taken under the wing of an experienced tailor as an apprentice, who soon taught him how to cut. My father likes to relay how he ruined Peter Sellers' jacket by cutting the fabric for the sleeves backwards. Poor daddy, he didn't even know his right from his left and there he was being given the heavy responsibility of cutting through costly Holland & Sherry worsteds and wools.  He remembers a swift clip around the ear being delivered with an admonishment to pay attention; measure twice and cut once, and all of that.

By the time his apprenticeship was completed, my father certainly knew his craft competently enough to have made Rex Harrison's suits in the 1964 film My Fair Lady. Examples of traditional English tailoring can be seen through the various tweeds and dinner jackets worn by the actor. 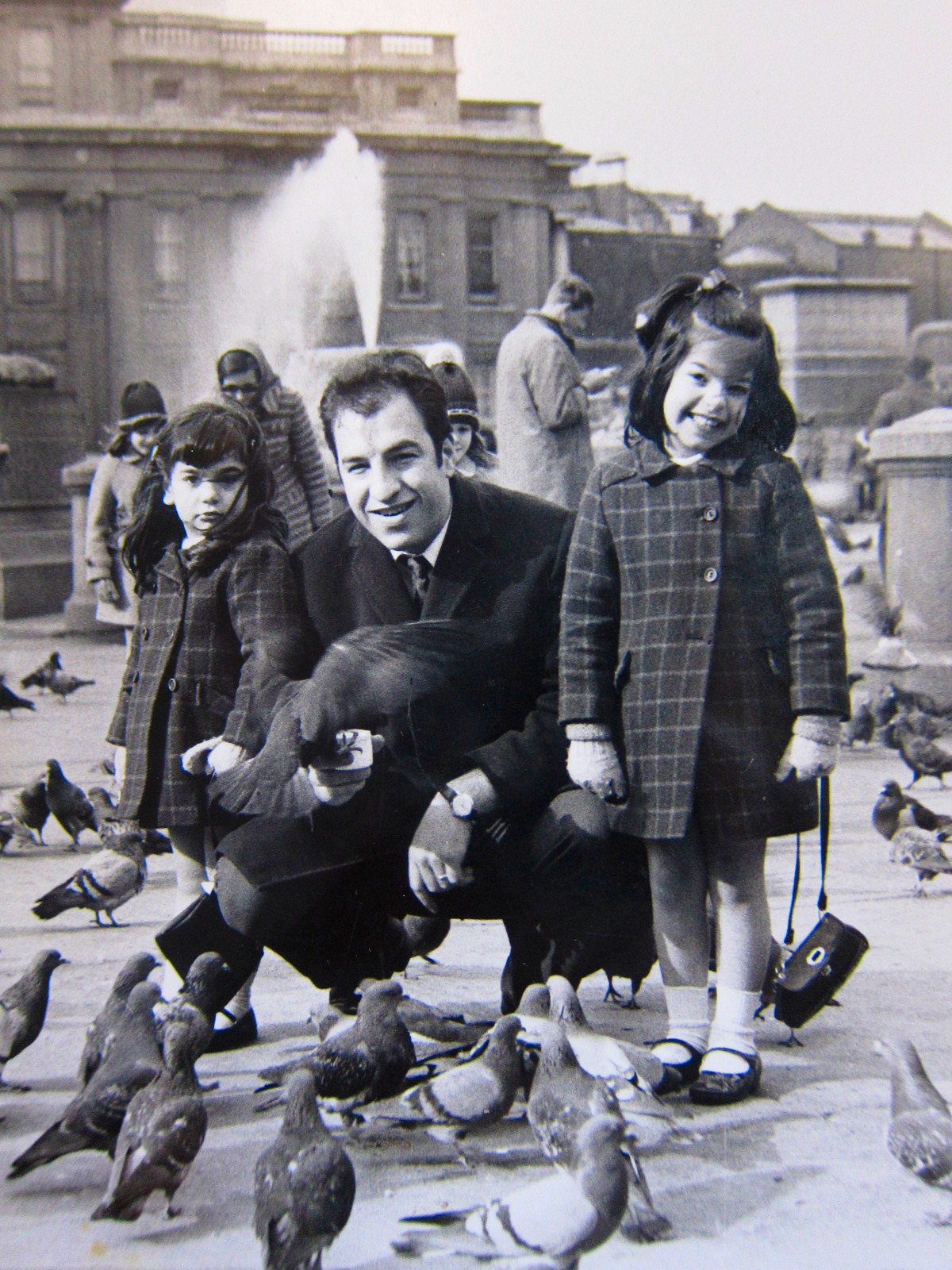 If you can get past the fountain spouting out of my father's head, you can see the young author of this blog (right) and her sister (left) enjoying a trip to Trafalgar Square, smartly attired in their first bespoke overcoats made by their talented father
Photo: Chronica Domus


My father eventually moved on to work for the suiting department at Harrods where he made ladies bespoke clothing. Jackets, skirts, and simple shift dresses were very popular items among the fairer sex.  I recall my mother showing me a fabulous shift dress in deep red wool, with a matching cropped and collared jacket adorned with shiny brass buttons that he had made for her around the time he was dressing some of the wealthiest women in London.  Imagine having your very own personal tailor at your disposal.  My mother always looked fabulously elegant at social functions thanks to my father's creations. My sister and I also benefited from his craft. One of my very favorite childhood photographs was snapped in Trafalgar Square where we were taken often to feed the pigeons. Not only do I cherish this photograph because of the happy memories, but also because the little coats my sister and I are wearing were made by my father.  If you look carefully, the very bottom button of our coats remains unfastened not because we were careless at dressing ourselves for our outing, but for the simple fact that my father was a tailor, and tailors have particular ways of doing things. Who knew there was a code of what buttons to fasten and which to leave unbuttoned. Apparently, this was the correct way to wear one's double-breasted coat. Of course, my father also made the heavy overcoat he sports too in the photograph. 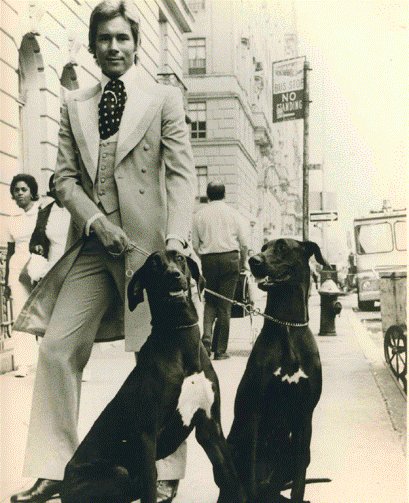 My favorite photograph of Tommy Nutter, whom I consider to have been one of the 20th century's most elegant dandies
Source


In 1969, one of Savile Row's most colorful characters offered my father a tailoring position. Tommy Nutter was unlike any other tailor on the row. He was flamboyant and larger than life, a gentleman peacock, and a true original.  He completely tore away from the traditional conservative ideal of what a bespoke suit should look like, the type of British cut that had placed Savile Row on the world's map. Thinking about this over forty years later, I can see exactly why my father, a tearaway rebel in his own right, went to work for Mr. Nutter, who was eventually nicknamed The Rebel On The Row, a dandy not seen since the days of Beau Brummell. It was to be a natural fit for my father, and he enjoyed the work there immensely.

Here my father crafted some of the era's wildest and most colorful and innovatively cut suits. Nutters attracted the glitterati of the day unlike any other traditional tailoring firm before it. Suddenly, stars such as Elton John, The Rolling Stones, and The Beatles all wanted to be dressed by Tommy Nutter.

Eventually, Nutters began making ready-to-wear lines and fewer bespoke suits so my father went on to work for various other firms along the row including Edward Sexton, Chittleborough & Morgan, and lastly, Gieves & Hawkes, tailors to the British royals.

Just before his retirement a few years ago, something quite marvelous happened. I shall leave that little story for my next post.

I do hope you'll come back and read the next installment to this series.

Posted by Chronica Domus at 9:08 PM