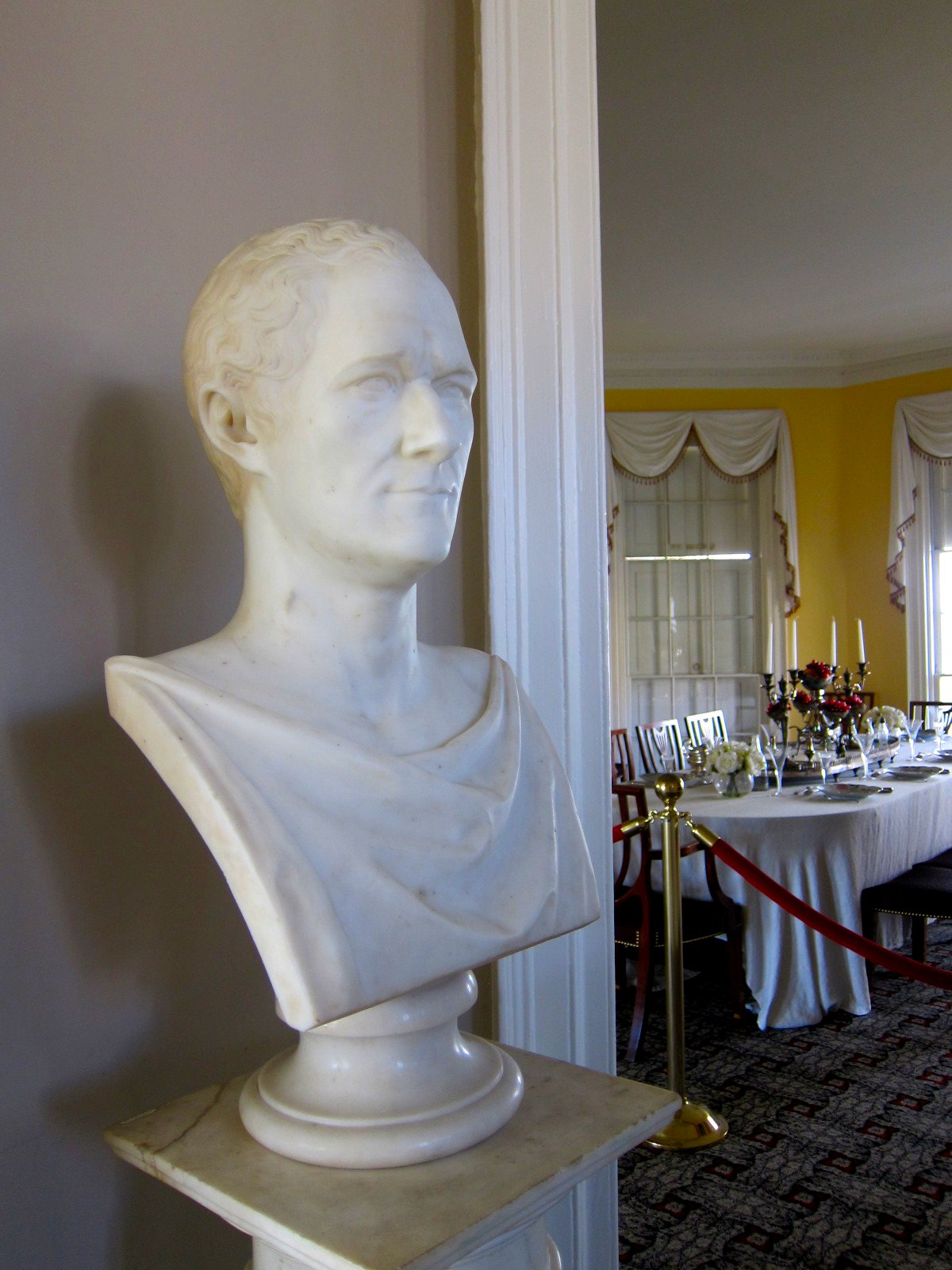 A bust in the entry hall of The Grange portrays Alexander Hamilton as a Roman senator
Photo: Chronica Domus


Several years ago, while rummaging around the shelves of a second-hand book shop, I stumbled across a pristine hardbound copy of Houses of The Founding Fathers by author Hugh Howard.  The book contains lavish color photographs and information on the private residences and domestic lives of the men that founded The United States of America.  Of course, I snapped up the book with alacrity and have since spent many happy hours poring over each detail of the beautiful photographs and text contained within. In fact, I took so much pleasure in the book that it inspired me to go on a bit of a pilgrimage, attempting to visit as many of  the houses featured in the book as possible. 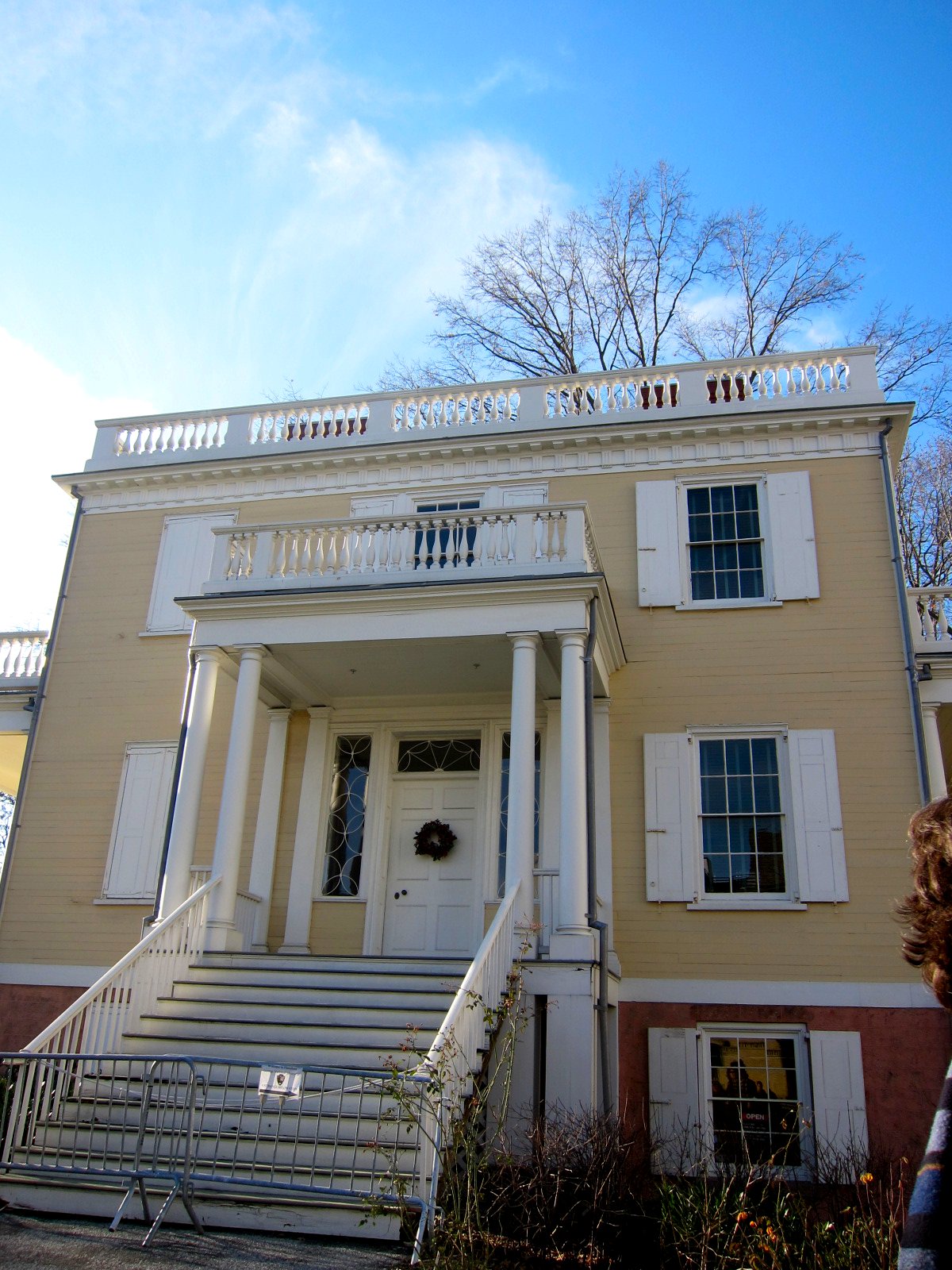 The facade of Alexander Hamilton's house, The Grange, spoiled by the unsightly modern barrier at the foot of the front entrance which is closed off to the general public (Note to NPS: Please, please do consider installing a more aesthetically pleasing, period appropriate solution in keeping with the excellent restoration work achieved thus far, thank you)
Photo: Chronica Domus 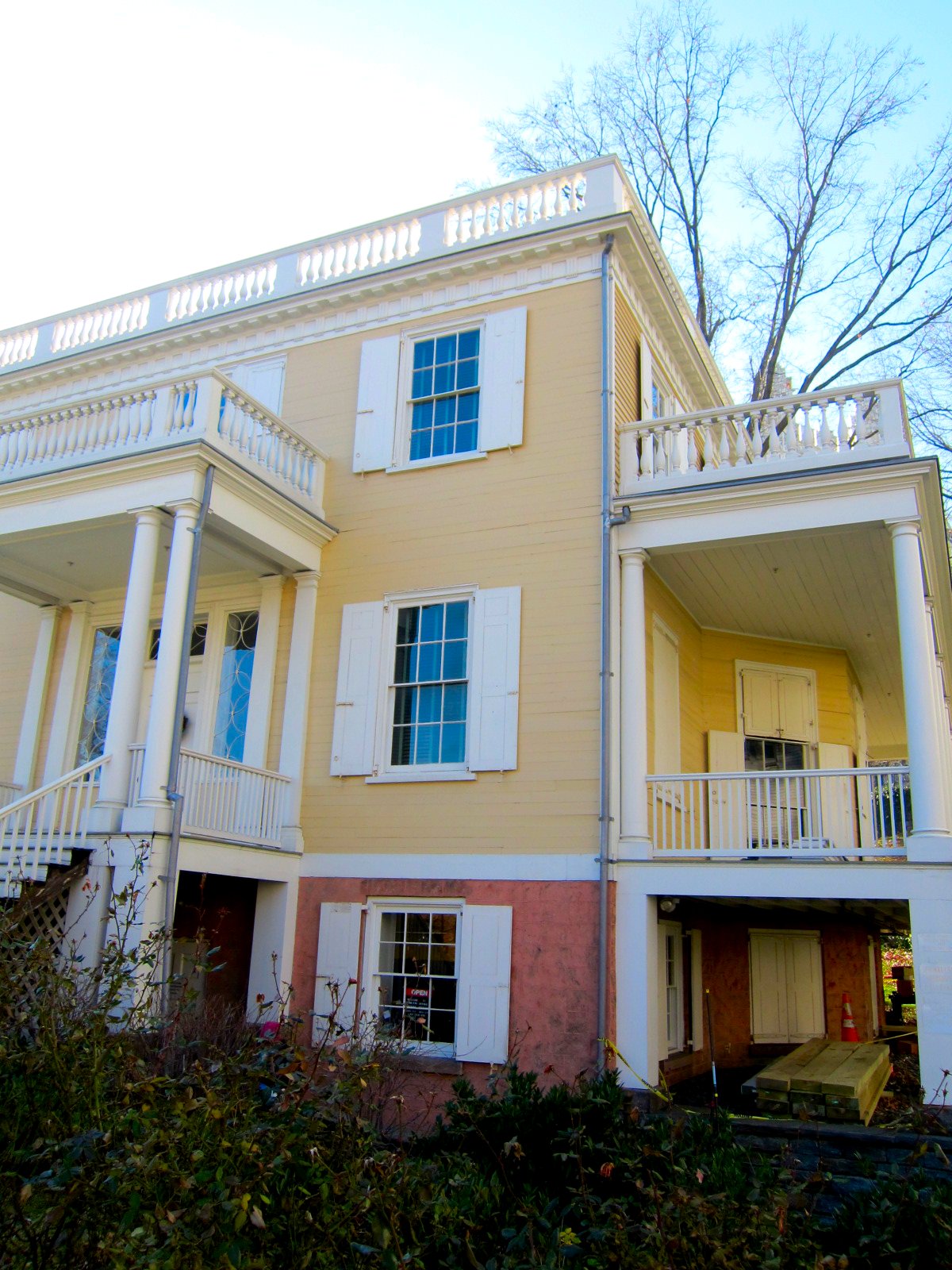 Visitors gain access to The Grange via the doorway beneath the front stairs (notice the on-going repair work below the porch to the right)
Photo: Chronica Domus


Wait a minute, did she just say "country house", for isn't Harlem in the midst of one of the most crowded cities on the planet?  The Grange, designed by John McComb Junior, was indeed a country house, for when it was completed in 1802, Harlem was very much removed from the madding crowd and entirely rural.  Situated within Hamilton's thirty-two acre estate, The Grange would provide the type of gentlemanly country life to which Mr. Hamilton aspired, a life to be shared with his wife Elizabeth Schuyler Hamilton and their many children. Tragically, he would reside there for a mere two years before his untimely death by duel.

The Grange, which is the only house Alexander Hamilton ever built, has been moved twice in its history.  From 1802 until 1888, it stood at its original location near the center of Hamilton's property. Then, the house was moved to 141st and Convent Avenue, where it sat quite unceremoniously wedged between an apartment building and a church.  It was not until 2008 that the National Park Service moved it to its present location in an operation involving nothing less than military precision and a watchmaker's eye for detail.  The progression of the house can be seen in the image below, which I photographed at the visitor center of The Grange. 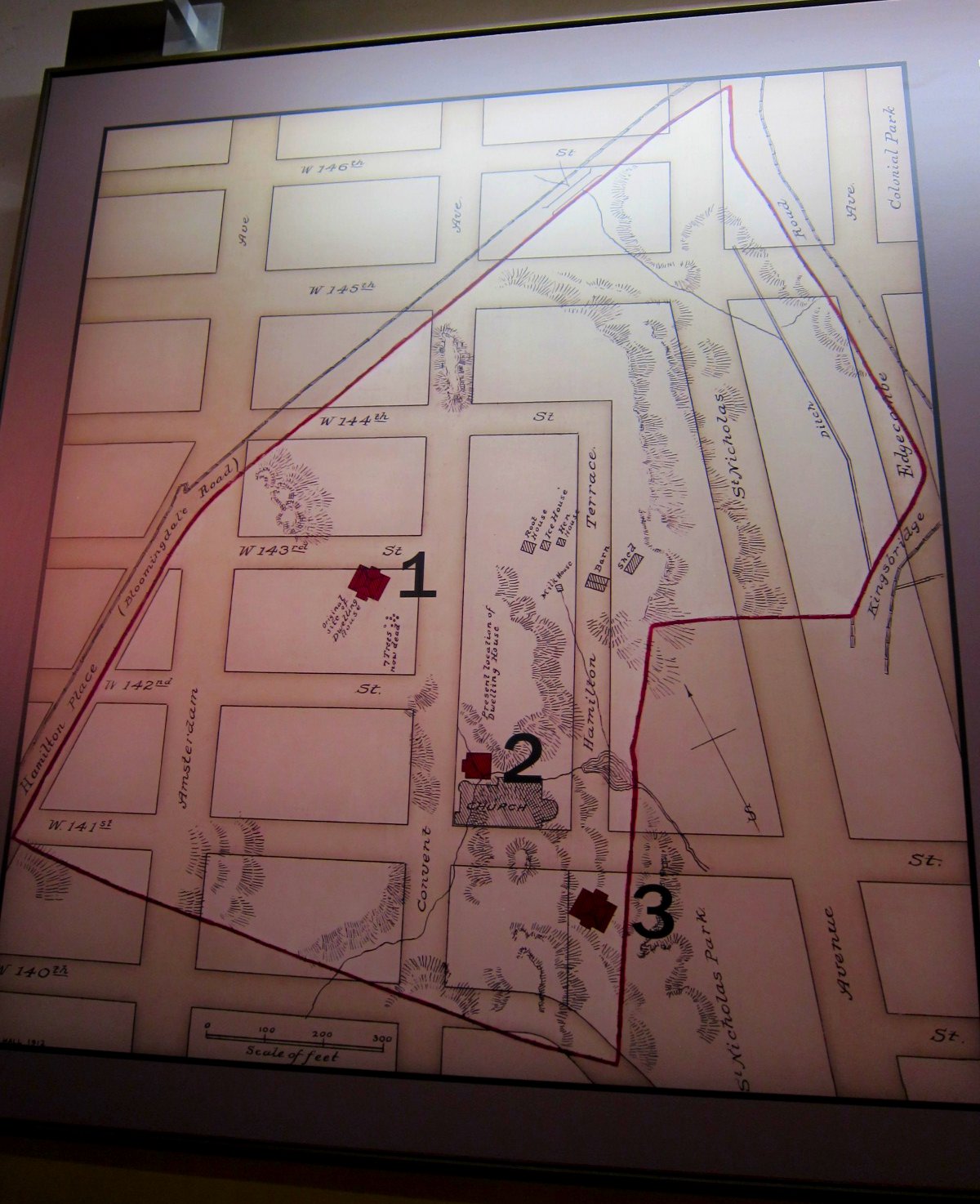 Points 1, 2, and 3 on this map identify The Grange's locations and positioning through the passage of time
Photo: Chronica Domus


Today, the house has been set within more appropriate surroundings, atop a sloping hillside within a small park-like setting.  It remains, nonetheless, jarringly juxtaposed with several looming buildings, a somewhat less than ideal backdrop for such a national monument. 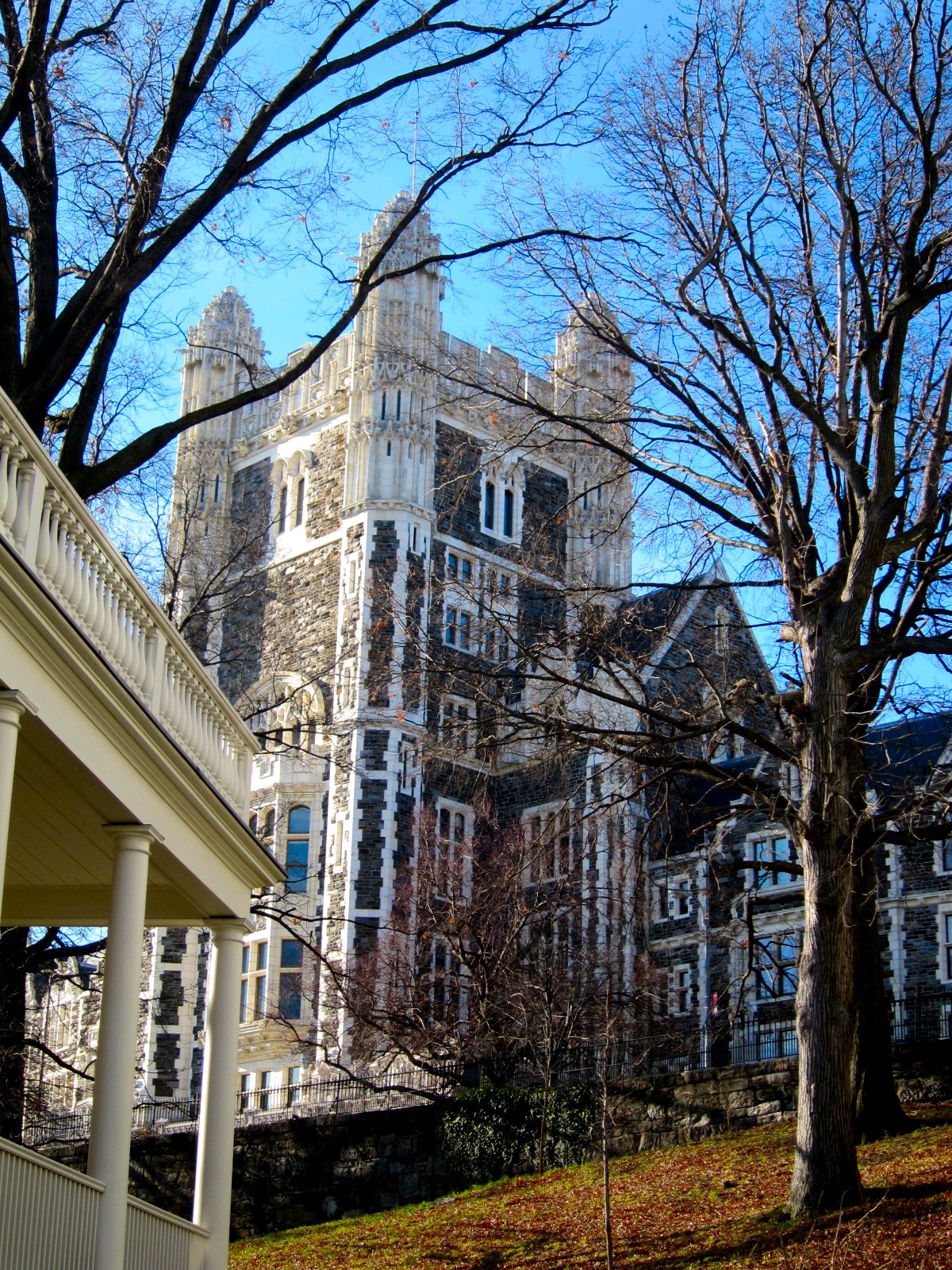 The City College of New York is one of the nicer buildings to share a vista with The Grange's covered porches
Photo: Chronica Domus


If visitors were to enter the house through the front door, as they did when The Hamiltons lived here, they would find themselves in this beautifully appointed entry hall, with an oilcloth simulating marble and stone, and a door surrounded by an elegant fanlight and sidelights.  Unlike most Federal era houses, the hall does not continue through to the back of the house.  Instead, it leads visitors directly towards the two angled octagonal-shaped public rooms to the rear. 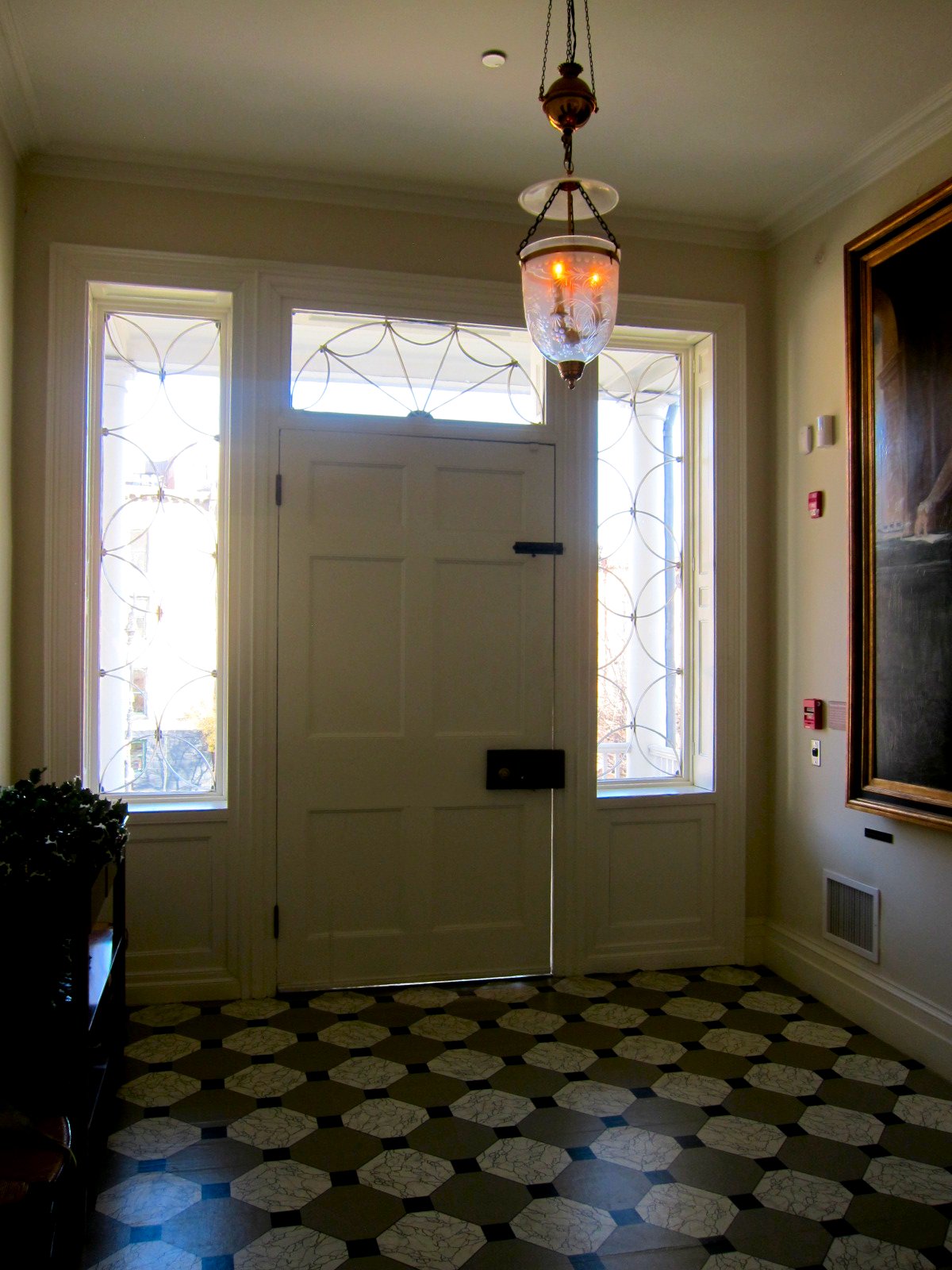 The beautiful entry hall of The Grange
Photo: Chronica Domus

Guests of The Hamiltons would have admired a painting of George Washington by Gilbert Stuart, a gift bestowed upon Mr. Hamilton by a wealthy merchant.  They would not have seen the painting that hangs in the entry hall today, which is but a recent copy of an original painted of Mr. Hamilton by John Trumbull in 1792. 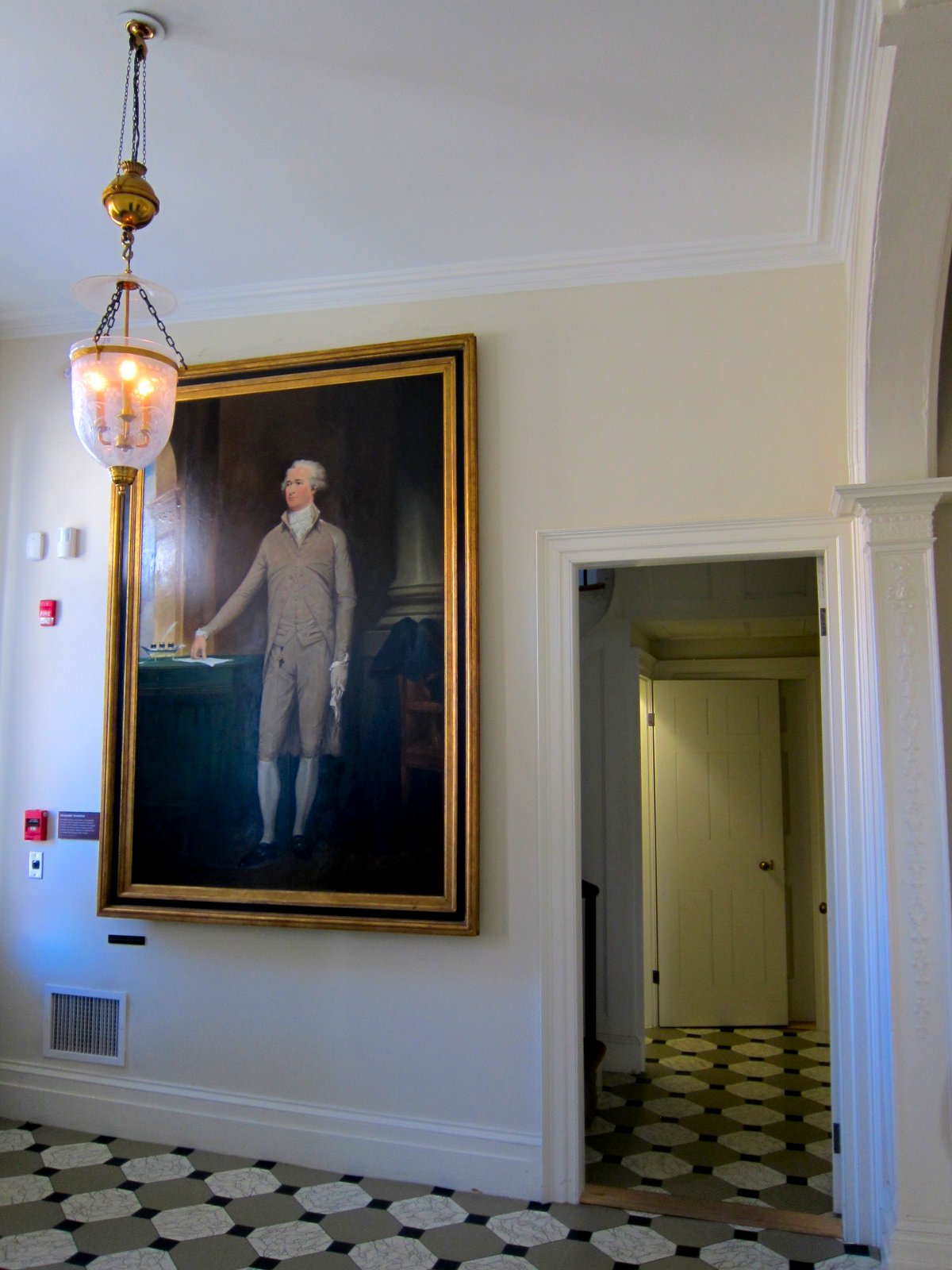 A portrait of Alexander Hamilton is prominently displayed in the entry of The Grange
Photo: Chronica Domus


As I peeked through the doorway to the right of the painting, I saw a beautiful set of stairs, complete with a striped runner, leading to... nowhere! Unfortunately, no record of how the bed chambers upstairs were decorated exists, or of who occupied which room, so the top floor is off limits to visitors. Additionally, there is of course the sticky business of having to uphold modern fire code regulations, and as the house lacks a secondary exit, the fate of the upstairs floor is pretty much a closed book as far as present and future visitors are concerned.  'Tis a great shame I say, for it took me considerable will power to resist the temptation of making a mad dash up the stairs, of which I am certain our pleasant National Park Service guide would not have approved. 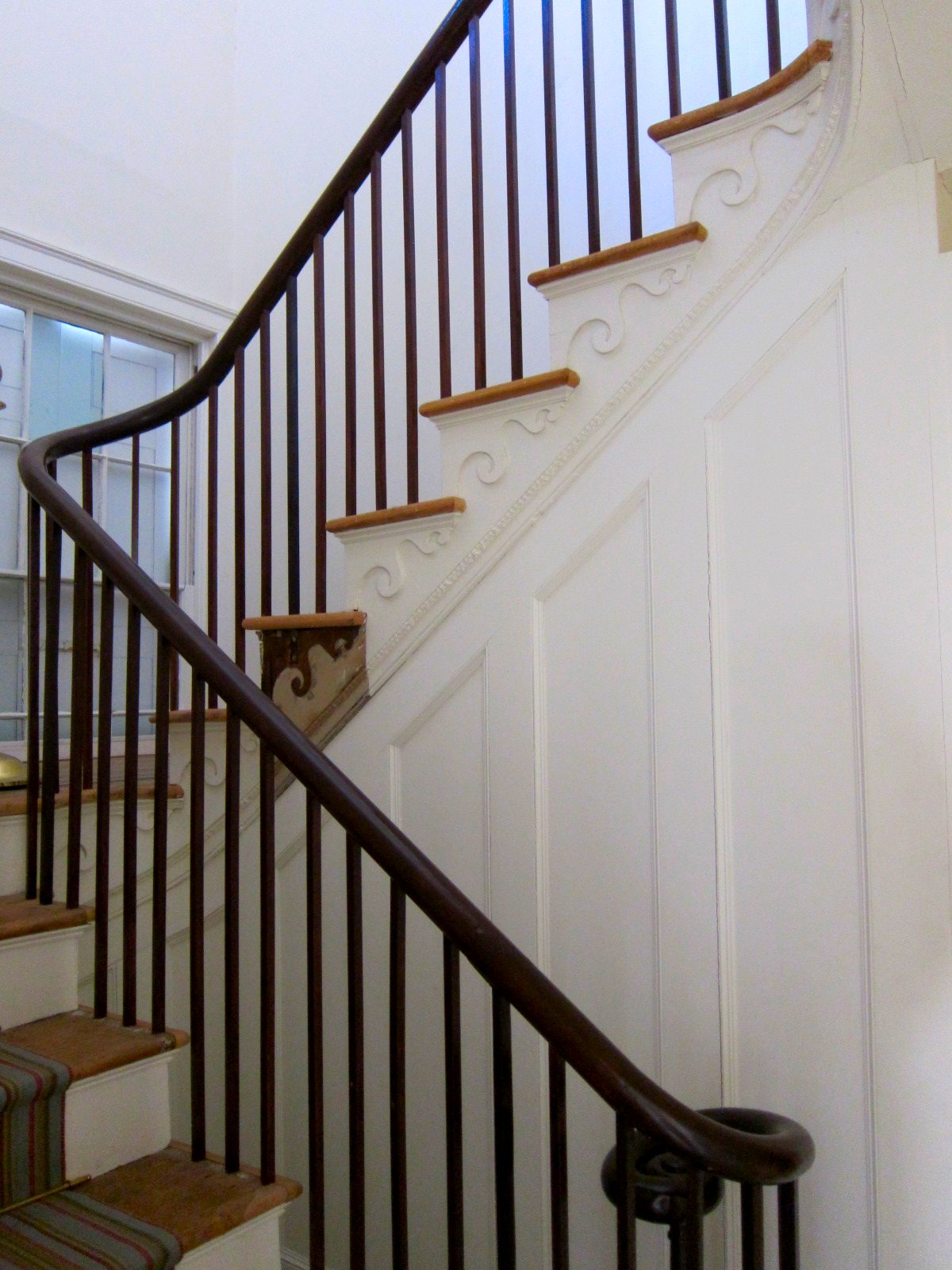 
Not to worry, I thought, as there was still plenty to see.  I'd long admired the two public rooms of The Grange that were included in Houses of The Founding Fathers, which had after all sown the seeds for my expedition to Harlem.  Below is a photograph of the page from my book showing the drawing room. 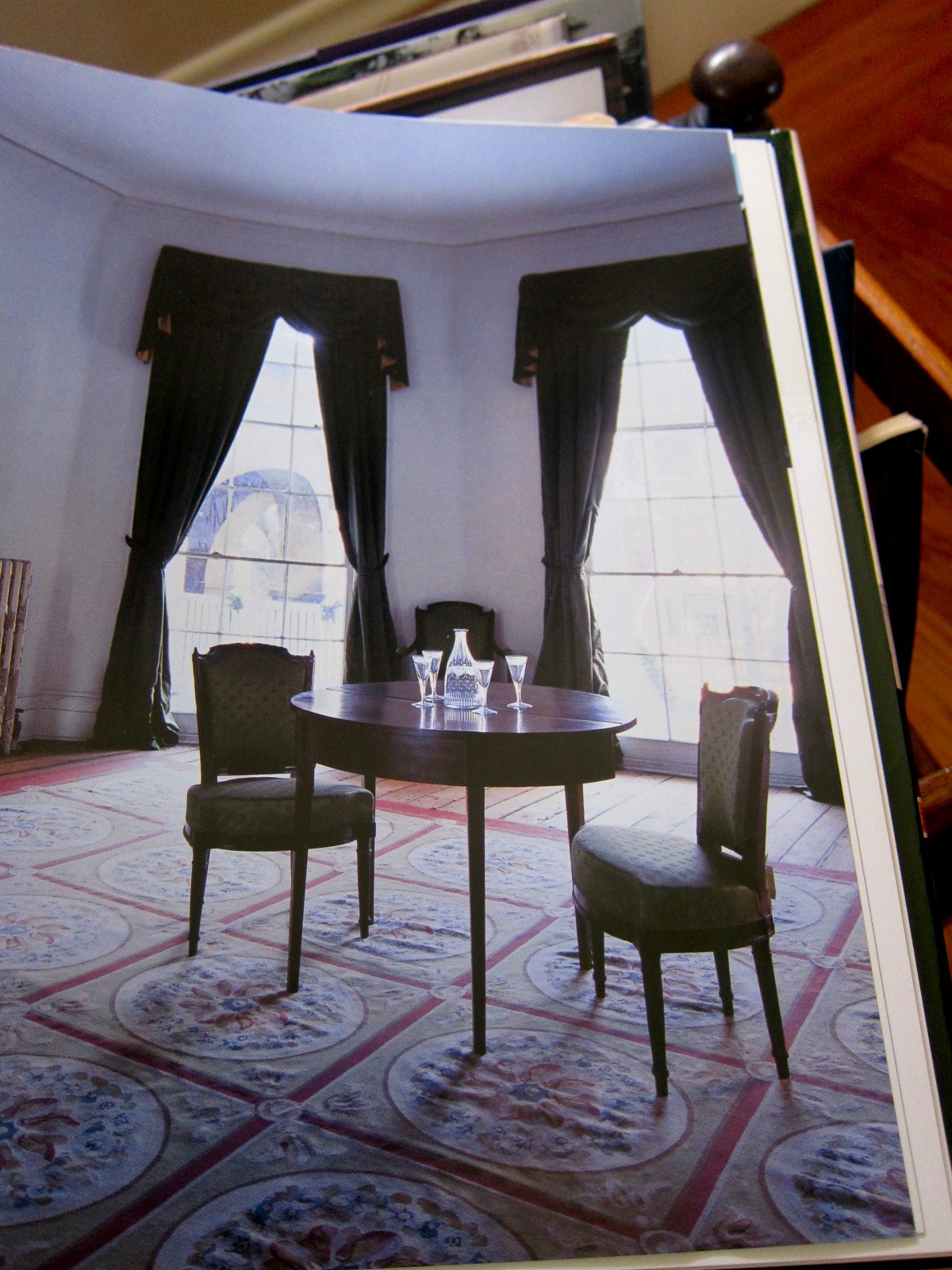 The drawing room as seen in the book Houses of The Founding Fathers
Photo: Chronica Domus


Stepping into the bright sunlit drawing room, I was startled to see how much of a transformation the octagonal room had received. I barely recognized it.  Yes, the Louis XVI chairs and games table were still there, along with the piano-forte, which is not shown in the photograph above but was an item shown in the book, and one that is original to the house.  Today, the room's walls have been painted a rich buttery yellow, the floor-length curtains replaced with fringed swags, and the carpet is now peppered with leaves atop a dark green ground, a color matching that of the upholstery.  I'm not quite certain what prompted these decorative changes outside of the new wall color, which came to light as being original through paint analysis of the walls when the house was moved to its present location. 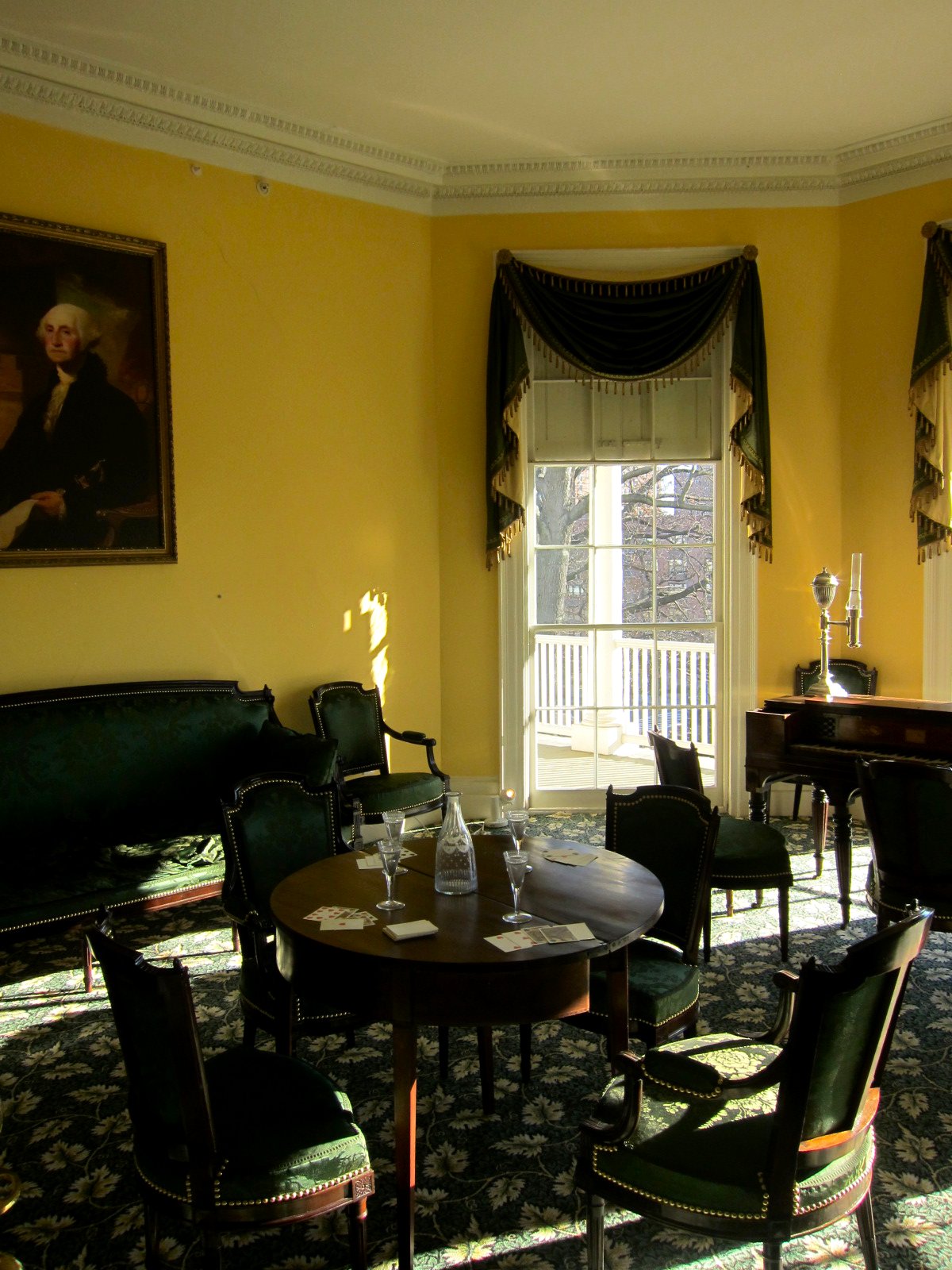 The drawing room as it appears today
Photo: Chronica Domus


The drawing room was not the only room in the house to have received an update.  Below is a photograph of what the dining room looked like when it was photographed for the book in 2007. 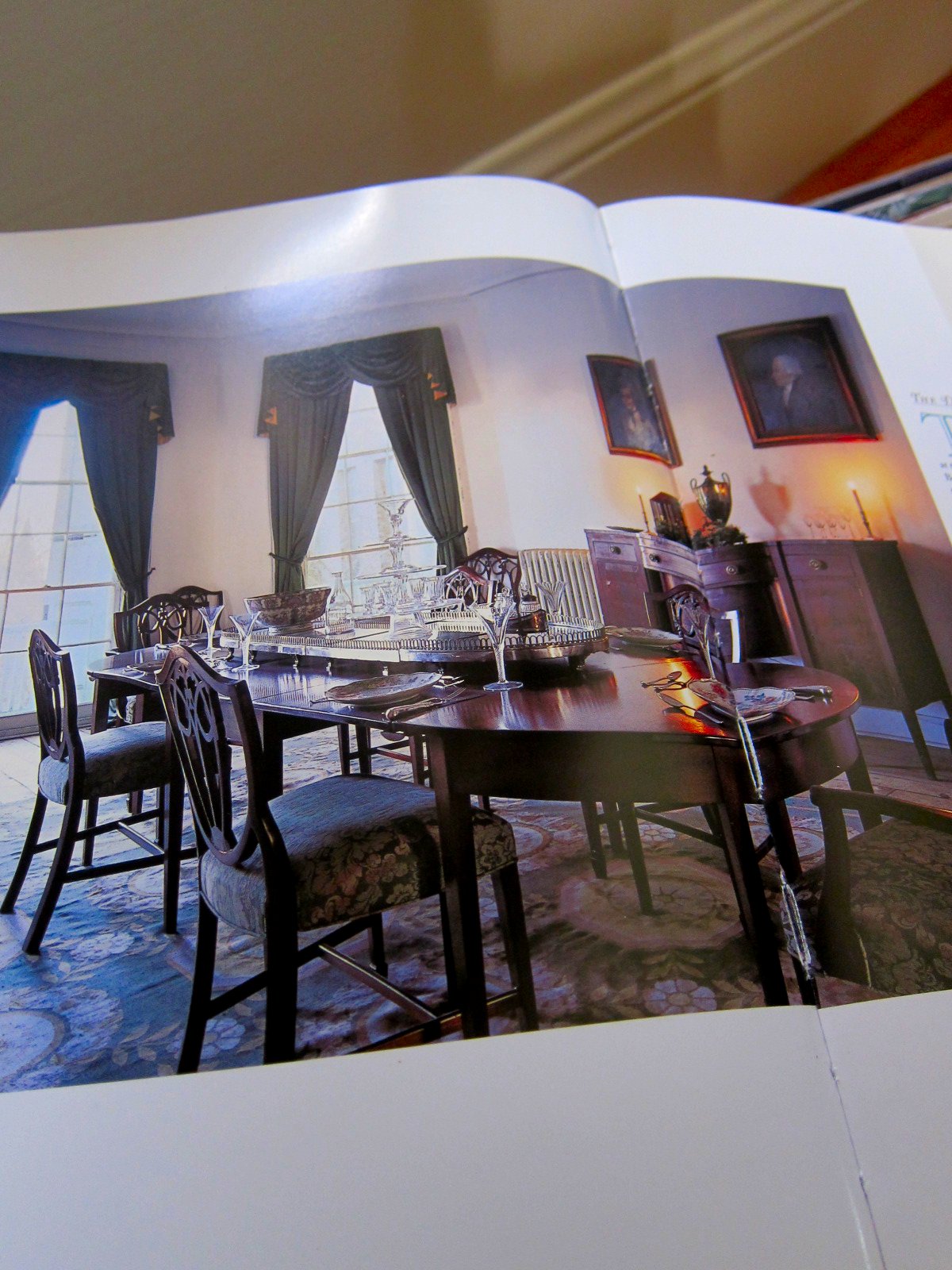 The Grange's dining room as seen in Houses of The Founding Fathers
Photo: Chronica Domus


Today, it is painted the same buttery yellow as the drawing room, affording it an airier feel. The shield-back dining chairs have been replaced and upholstered in what looked to me to be a black horsehair fabric appropriate for the period.  The curtains have met a similar fate to the ones in the drawing room and have also changed color.  Finally, the dark floral carpet has been swept away and replaced with a smaller design incorporating foliage in shades of grey and red.  There was just one other small change I noticed; the mahogany sideboard had been switched out for a serpentine front example with two lower central doors. Again, I am puzzled by this change as the sideboard in the above photograph seems just as appropriate for a room of this period. 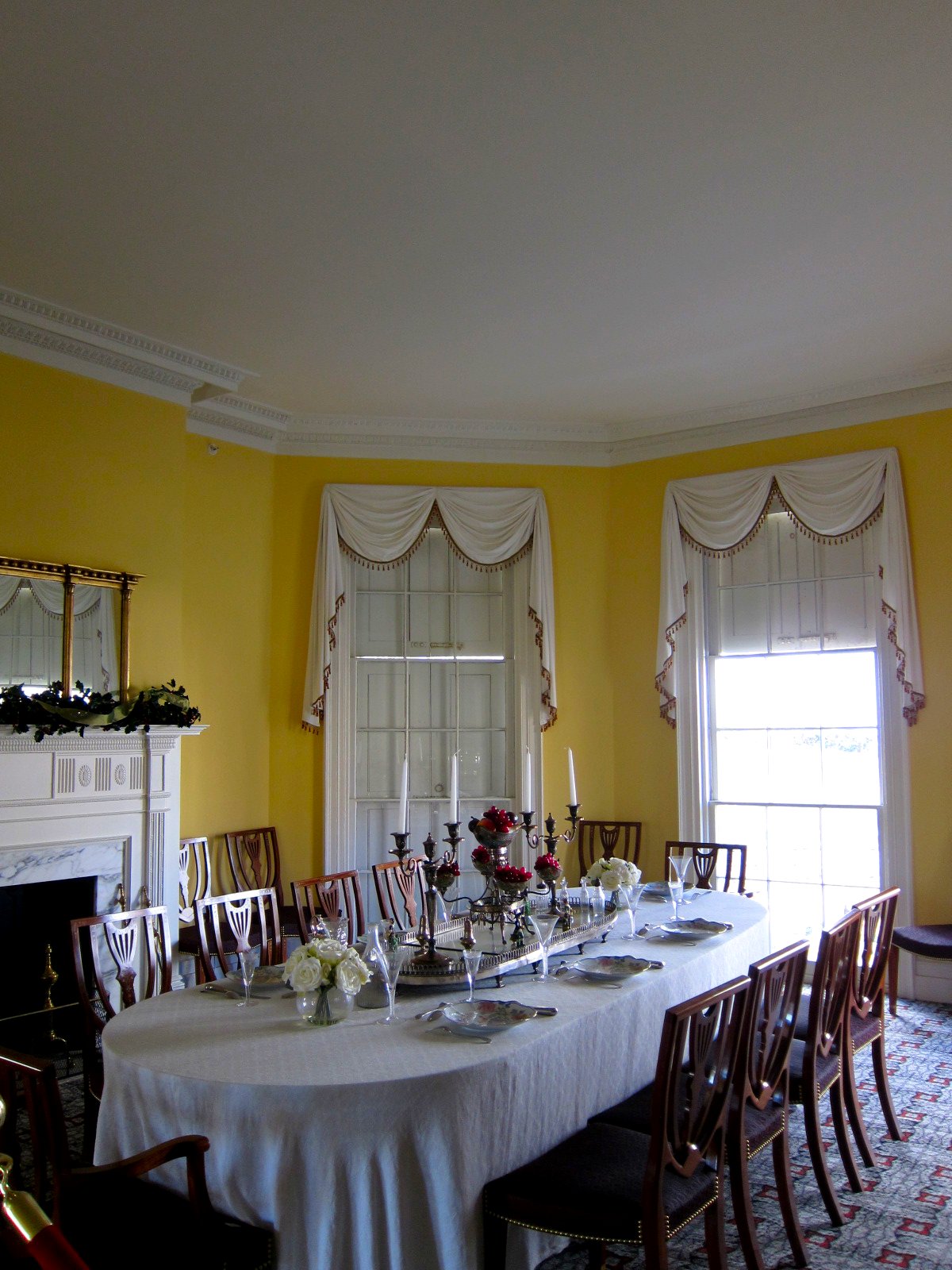 
The remaining room accessible to the public is Mr. Hamilton's study-cum-library, which is painted an attractive grassy green, unlike the version in the book which was devoid of any color.  Once again, paint analysis determined this was the original rich verdant green shade, a pigment which no doubt would have cost The Hamiltons dearly in its day. The three books resting on the table top belonged to Mr. and Mrs. Hamilton. 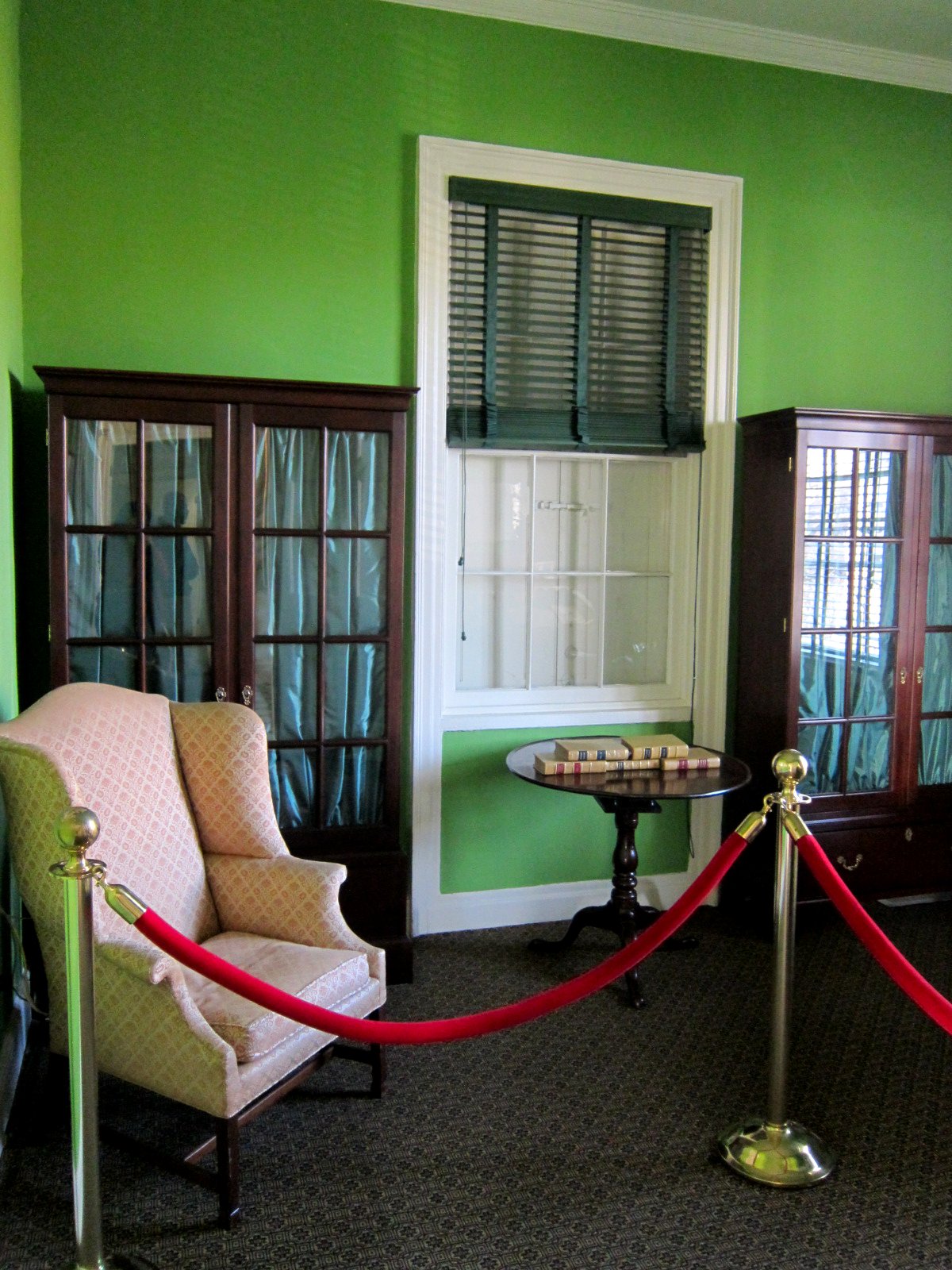 
My visit to The Grange was enriched through the enjoyable experience of  the visitor center, located in the basement level of the house, where much more information about the fascinating life of Alexander Hamilton can be found.  This is also where the wonderful introductory video that our knowledgeable park ranger, Mr. George Tonkin, played for us before our house tour commenced.

I highly encourage you to add this national treasure to your itinerary and to make the trek uptown when next in New York city.  Incidentally, if you arrive early, as we did, you might be as fortunate as us and find yourself part of a very small tour group.  Aside from our family of three, there was but one other gentleman to join in on the fun, which made for a very cozy tour indeed.  At peak times, the house tours can swell to a maximum of fifteen people so this was indeed a special treat, allowing us to absorb as much of the fine detail of the house as possible.  Besides, we had the undivided attentions of poor Mr. Tonkin, whom we bombarded with questions, and what a good sport he was!

Oh, and don't forget to saunter on down the hill once you've completed your tour and visit Grant's tomb, which I wrote about here.

Posted by Chronica Domus at 6:55 PM