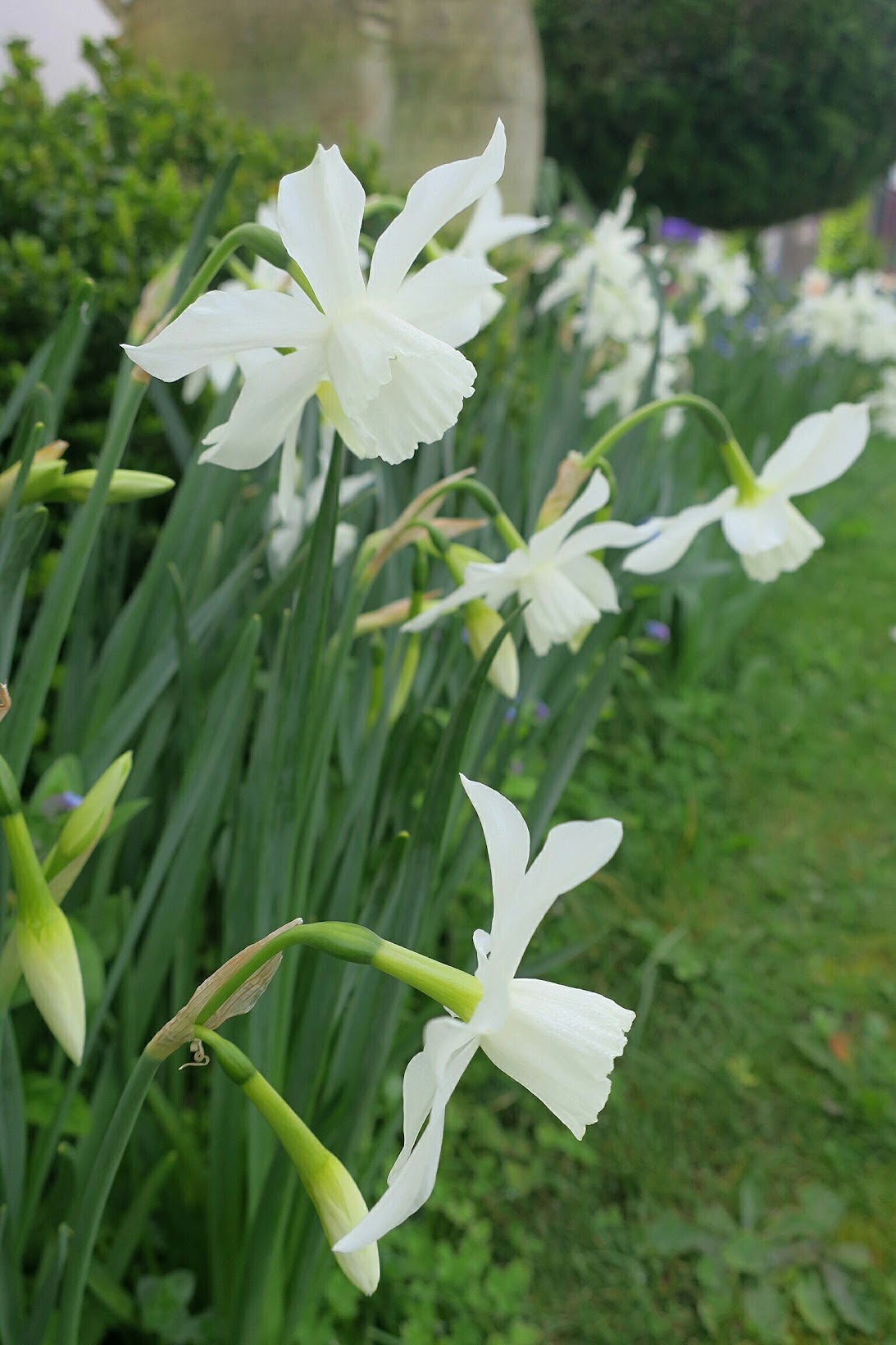 
I have written about my favorite flower, the humble daffodil, extensively in the past and cannot help but rejoice in its understated yet elegant beauty each spring.  I am not talking about the overly-hybridized modern daffodil, mind you.  No, not at all!  I am, in fact, referring to those lesser-known, older varieties which I champion whenever opportunity arises. 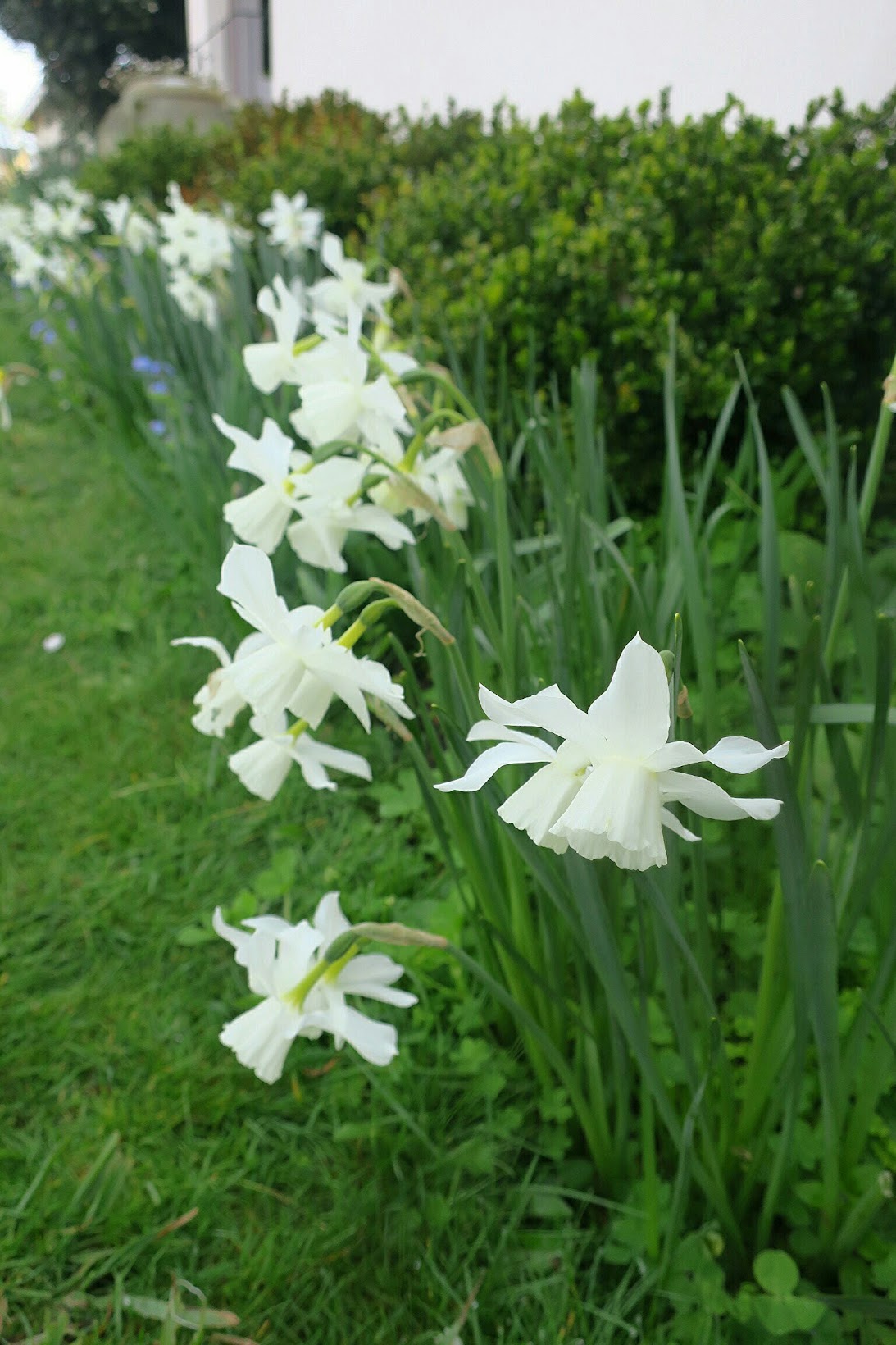 When in bloom narcissus Thalia is like a spring snow drift
Photo: Chronica Domus


There has been a succession of daffodils blooming in the garden since late December.  As each variety fades, another awaits patiently in the wings to take center stage. Presently, my favorite of the snowy-whites, narcissus Thalia, is putting on a blinding display.

Thalia is a heritage daffodil, having been registered in Holland in 1916, and thus an appropriate addition to the garden of our house which was built in 1925. Her nodding star-shaped blooms are simply breathtaking in their elegance.  Her color is a true white, not cream or ivory. She is as pure (white) as the driven snow.  I consider Thalia to be inherently demure within the world of flowers.  In fact, if her name were not Thalia, I would have named her Audrey, as in Hepburn. 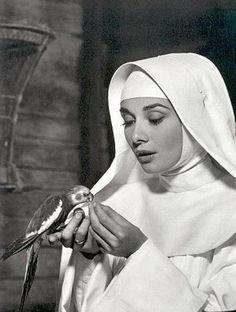 Thalia's exquisite scent is equally delicate and does not overwhelm the olfactory sense.  Do please give consideration to these older strains of daffodil when planting your own spring garden for I just know that you too will be rewarded tenfold for your efforts. Just to prove it, you'll be delighted to learn that Thalia possesses a generous spirit. She happily obliges in spreading her snowy-white wings, naturalizing to great effect within a few short years.

I can think of no more pleasurable experience than cultivating one's own flowers and reveling in the satisfying and humbling act of gathering a small handful to bring indoors.  Just look how Thalia enlivens a corner of the drawing room. 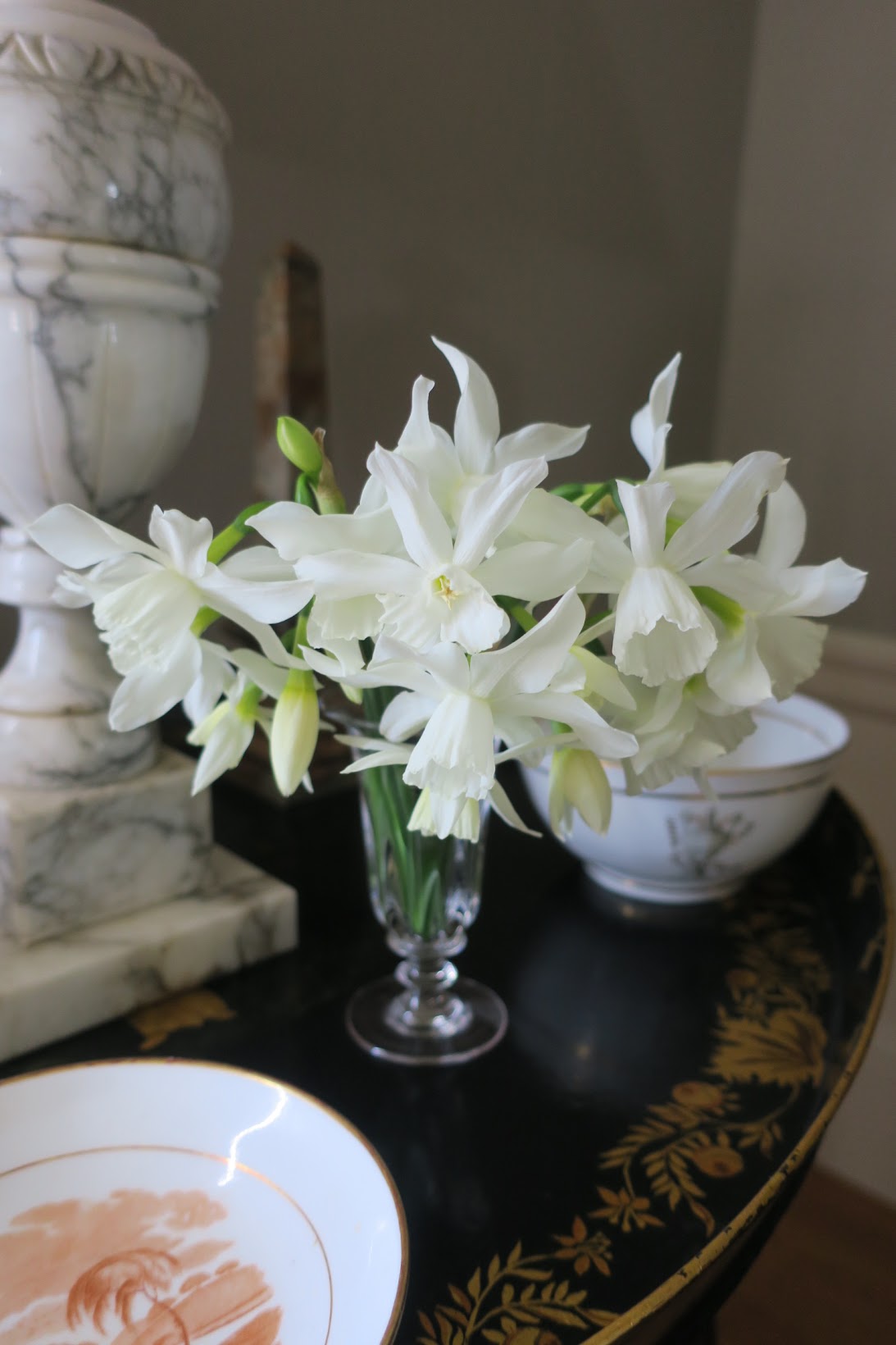 A pretty posy of narcissus Thalia sits atop a table in the drawing room
Photo: Chronica Domus 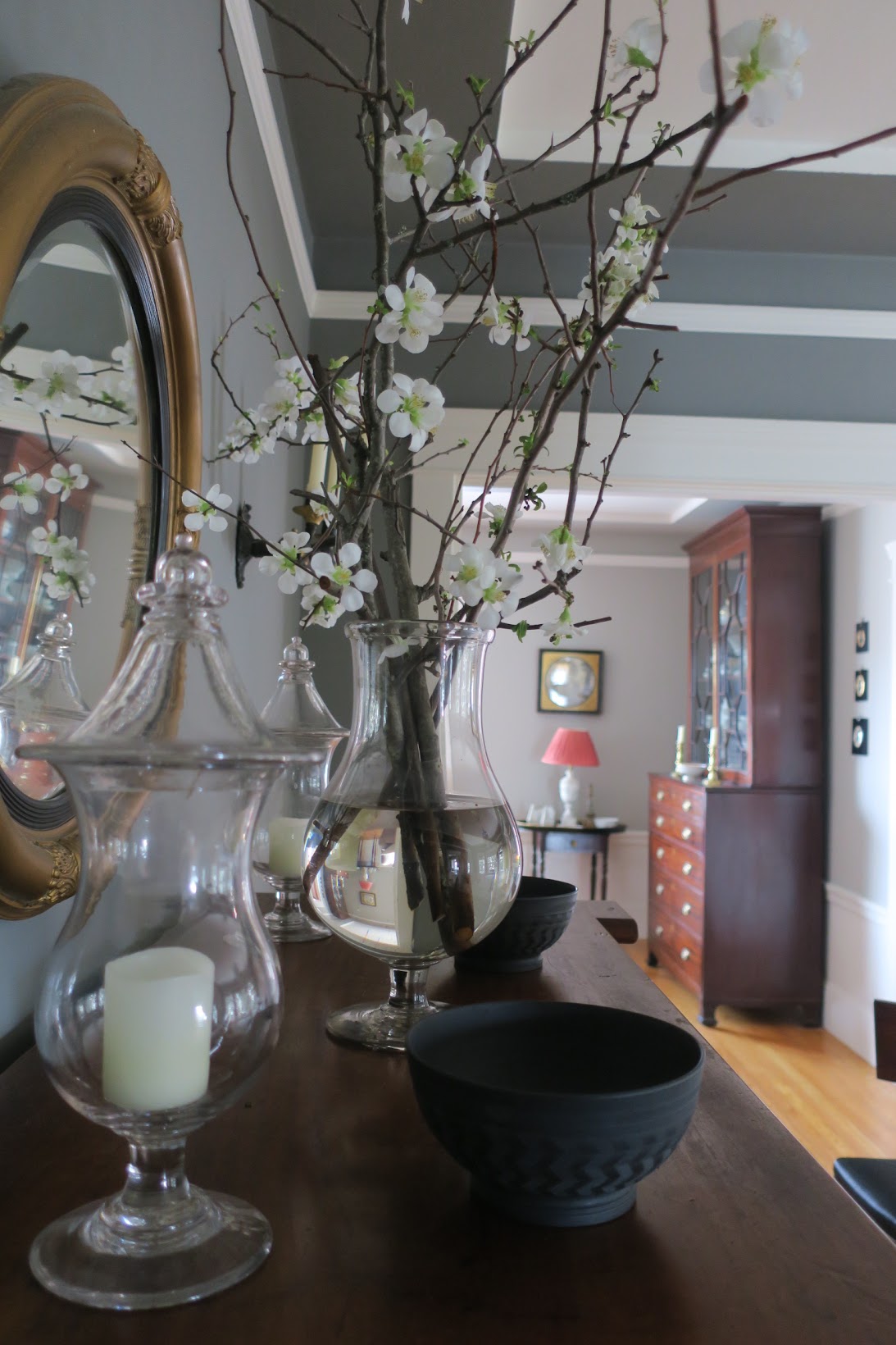 The flowering branches I purchased a few weeks ago for our dinner party are still going strong and impart an air of spring to the dining room
Photo: Chronica Domus


And, although I did not grow the mixed yellow bunches of daffodils seen in the photograph below, gathered in English earthenware milk jugs and resting on the kitchen counter, I was fortunate to have captured their ephemeral beauty saturated in early morning light, the golden hour.  The blooms were a much appreciated gift from my thoughtful husband who knows me too well.  I'm simply mad for daffs! 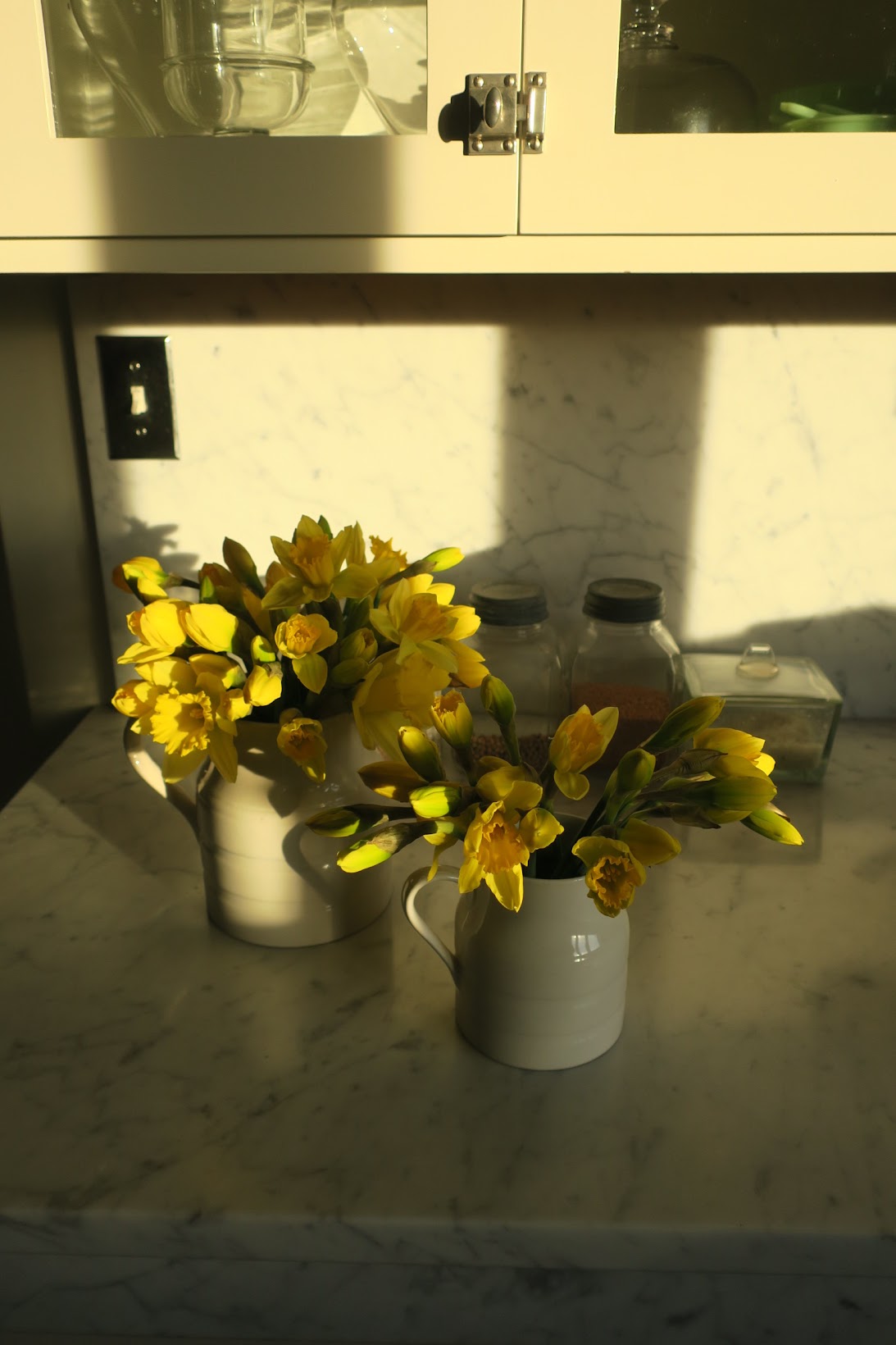 Tell me, do you grow your own daffodils or buy them by the armload at this most glorious time of year?

I wandered lonely as a cloud
That floats on high o'er vales and hills,
When all at once I saw a crowd,
A host of golden daffodils;
Beside the lake, beneath the trees,
Fluttering and dancing in the breeze.

Continuous as the stars that shine
And twinkle on the Milky Way,
They stretched in never-ending line
Along the margin of the bay:
Ten thousand saw I at a glance,
Tossing their heads in sprightly dance.

The waves beside them danced, but they
Out-did the sparkling waves in glee:
A Poet could not but be gay,
In such a jocund company:
I gazed-and gazed-but little thought
What wealth the show to me had brought:

For oft, when on my couch I lie
In vacant or in pensive mood,
They flash upon that inward eye
Which is the bliss of solitude;
And then my heart with pleasure fills,
And dances with the daffodils.

Posted by Chronica Domus at 5:36 PM